The Tangle in the Time Cabinet 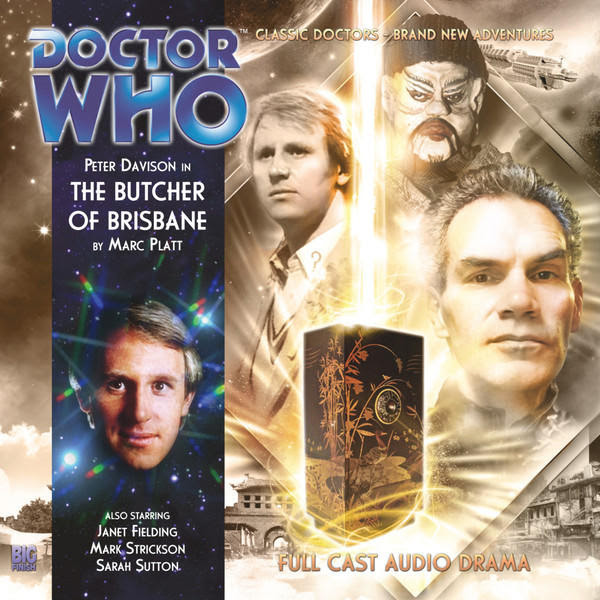 The Fifth Doctor influences the future of the Fourth Doctor by going to the future to take part in the past of the villainous Magnus Greel in The Butcher of Brisbane. A 2012 audio play that serves as a prequel/sequel to the great Fourth Doctor television story The Talons of Weng-Chiang, The Butcher of Brisbane never matches the effective fun and menace of that serial but it is pretty good.

According to the TARDIS wiki, Greel is referred to as "The Butcher of Brisbane" in Talons of Weng-Chiang--it's been a while since I watched it so I'll take its word for it. But it provides a neat connexion to the Fifth Doctor's (Peter Davison) companion Tegan (Janet Fielding) as the Doctor makes yet another unsuccessful attempt to bring her home. The TARDIS arrives in Brisbane true enough but in a distant post apocalyptic future where Australia is covered with ice and snow.

Played now by Angus Wright, taking over from Michael Spice on the show, Magnus Greel is here presented in what would be his former glory as Supreme Minister of Justice of the Supreme Alliance of Eastern States in Beijing. He presides over a system that punishes criminals with hard labour--Turlough (Mark Strickson) and Nyssa (Sarah Sutton) quickly discover that a secret part of this punishment involves time travel.

The story features some effective, complicated time travel hijinks mixed with complicated politics. There's also a surprisingly effective romantic subplot between Nyssa and Magnus. Peter Davison is in fine form in this one, writer Marc Platt making him come across as brilliant and mysterious in ways that recall the Seventh Doctor. Five plays cards close to his chest, having to dance around the fact that his previous incarnation is currently serving in the Filipino army and avoiding giving any hint to Magnus that he's aware of the villain's future. Davison delivers all this with nuance that suggest the layers of necessary secrecy and anxiety.

Posted by Setsuled at 11:42 AM
Email ThisBlogThis!Share to TwitterShare to FacebookShare to Pinterest