Morrissey in a Mad World 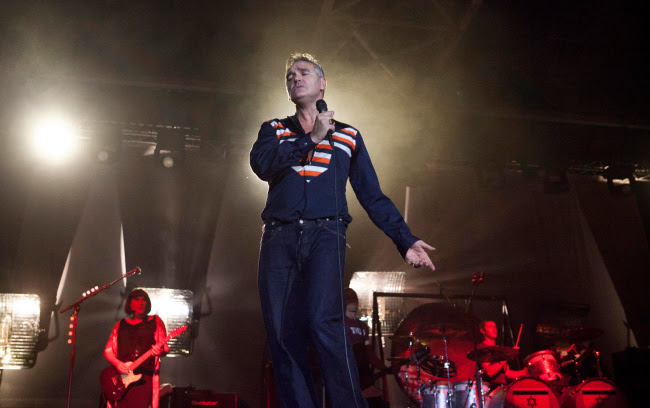 The new Morrissey album, Low in High School, came out on Friday and I spent a good deal of time listening to it on Saturday. It's good, I think I like it more than World Peace is None of Your Business though the lyrics in that previous one were often more challenging and approached a greater diversity of subject matter. Gods know we need more art that challenges people to think.

But Low in High School might be challenging for some in that it features two unabashedly pro-Israel songs, including one called "Israel" and another very nice one called "The Girl from Tel Aviv Who Wouldn't Kneel", apparently in part a reference to Etty Hillesum, a woman who was killed in Auschwitz. I learned this from this article from which I also learned that Morrissey was presented with a key to the city of Tel Aviv.

A lot of the songs on the album have verses that end with lines leading into the next, something matched by beats that build momentum nicely.

Morrissey's past few albums have had a harder rock quality to them but Low in High School has a lot more melodic piano, almost resembling cabaret and the last line in the verse "There's no need to go into that now" is tossed off with a biting flippancy to highlight the position of people who live in dangerous places and situations but who are ignored or pushed aside.

The first half of the album is more focused on the personal romantic issues Morrissey's music is more famous for, the song "Home is a Question Mark" has an effective melancholy broken up with the surprisingly odd, visceral image of his imagined lover wrapping his or her legs around his face. But there's plenty of politics mixed into the first half as well--and romance in the second. He describes an opposition between those who seek love (as in "All the Young People Must Fall in Love") and those who pursue careers that make them into oppressors like the soldier in "I Bury the Living" who ends the song by pointing out that he hasn't died doing the job he loved because getting a bullet to the head "wasn't the job I loved."

Though according to an interview that's going around to-day, Morrissey describes himself as generally "apolitical, but I'm a human being that exists in the world today. Everything we do has to do with politics. But as I said, I've never voted for any party in my life." Though that's not the part of the interview--a bad translation from the German magazine Der Spiegel--that's circulating in online tabloids to-day as a fuel for outrage. He's being called stupid or insensitive for his comments on the wave of sexual harassment scandals in Hollywood despite the fact that in general I find his words the sanest said on the subject in public discourse so far:

SPIEGEL: Since we're here in Hollywood, have you followed the debates on Harvey Weinstein, Kevin Spacey, and #MeToo?

Morrissey: Up to a point, yes but then it became a play. All at once all owe. Anyone who has ever said to someone else, "I like you," is suddenly being charged with sexual harassment. You have to put these things into the right relations. If I can not tell anyone that I like him, how would he ever know? Of course, there are extreme cases, rape is disgusting, any physical attack is repugnant. But we have to see it in proportion. Otherwise, every person on this planet is guilty. We can not decide permanently from above, what to do and what not. Because then we are all in the trap. Some people are already awkward when it comes to romance. They do not know what to do and then their behaviour is aggressive.

SPIEGEL: What do you think of Spacey, one of the main characters in a movie, replacing her with the launch date?

Morrissey: I think that's ridiculous. As far as I know, he was in a bedroom with a 14-year-old. Kevin Spacey was 26, boy 14. One wonders where the boy's parents were. One wonders if the boy did not know what would happen. I do not know about you but in my youth I have never been in situations like this. Never. I was always aware of what could happen. When you are in somebody's bedroom, you have to be aware of where that can lead to. That's why it does not sound very credible to me. It seems to me that Spacey has been unnecessarily attacked.

SPIEGEL: Is this also supposed to apply to the actresses who went to the hotel room with Weinstein?

Morrissey: People know exactly what's going on. And they play along. Afterwards, they feel embarrassed or disliked. And then they turn it around and say: I was attacked, I was surprised, I was shattered into the room. But if everything went well, and if it had given them a great career, they would not talk about it. I hate rape. I hate attacks. I hate sexual situations that are forced on someone. But in many cases one looks at the circumstances and thinks that the person who is considered a victim is merely disappointed. Throughout the history of music and rock 'n' roll there have been musicians who slept with their groupies. If you go through history, almost everyone is guilty of sleeping with minors. Why not throw everyone in jail at the same time?

SPIEGEL: David Bowie has deflowered a 15-year-old, according to the person concerned.

Morrissey: That was absolutely normal back then ...

SPIEGEL: Have you ever been in such a situation?

SPIEGEL: Neither on one side or the other?

Personally, I think Weinstein probably is a scumbag, I'm less sure on Spacey, but one thing's for sure it creeps me the hell out that people's lives are being ruined without any criminal convictions. People get accused and there seems to be a general assumption that they're guilty. The most egregious cases so far, in my opinion, have been Richard Dreyfuss and George Takei. Dreyfuss, not long after expressing pride in his son for coming forward with a claim of being abused by Kevin Spacey, was hit with allegations himself by his friend and former collaborator Jessica Teich. In addition to claiming Dreyfuss showed her his penis (which Dreyfuss denies), Teich describes years of additional harassment. And yet she also adds, "Richard would be very surprised if 30-odd years later he heard that I felt completely coerced and disenfranchised. I think he’d be like, ‘Oh no, I thought you really liked me.’ I don’t think he had any idea." So basically she says that she believed he thought what was going on was reciprocal but instead of going to him directly to address the matter she went public with it. She didn't go through mutual acquaintances, nothing. Raising awareness about the proper time and place for sexual advances is good but the fact that she decided to publicly shame someone she believed was entirely ignorant of his own crime is weird to say the least.

Meanwhile, George Takei has been accused of misconduct by a man who went home with him in 1981, allegedly Takei attempted to remove his underwear when the man was asleep. Takei denies the allegation and at this point no-one has brought forth any evidence. In fact, this man has apparently been making this claim about Takei for years and has even expressed surprise himself that he's suddenly being paid attention to.

The fact that Takei's name is suddenly deemed worth dragging through the mud because of a single unsubstantiated allegation is weird enough. What's even weirder is there's suddenly outrage about quotes from The Howard Stern Show where Takei describes grabbing men's penises and he's had to explain he was joking.

He's had to explain he was joking about grabbing penises. On The Howard Stern Show.

You know, once upon a time, George Takei was known as Sulu from Star Trek. Then he found a new claim to fame when he came out of the closet and began indulging in racy banter with Stern, audible to Stern's audience of millions for almost twenty years. This led eventually to his Facebook page with over a million likes . . . and now, it's the people who follow his Facebook who are suddenly aghast at the very kind of talk, enjoyed by millions, that put Takei into his new celebrity role in the first place. Maybe these hypocrites think they don't have to feel so bad about the retconned sick humour they used to laugh at if they can find a scapegoat to take the fall.

Another thing I think people are losing sight of here, as far as Kevin Spacey and George Takei are concerned, is the fact that these are both older gay men who led much of their adult lives closeted in a world where being gay was regarded as sick by mainstream morality. Another thing you might hear if you go back and listen to Takei on The Howard Stern Show is him talking about secretive one night stands he engaged in even long after the success of Star Trek. I really hate the fact that "empathy" has become a buzzword because it's exactly what the young editors and writers who are trashing him need to exercise in order to put themselves in the shoes of someone conscious that their fundamental physical urges are seen as sick by the respectable world. Can you imagine for a moment how that might fuck up your barometer when it comes to flirting?

Mind you, I'm not saying Spacey or Takei are innocent. I'm saying we don't know if they're guilty. Our legal system is founded on the premise of presumed innocent until proven guilty for a reason. You end up with mob rule otherwise. I've always said Roman Polanski should go to jail despite the fact that I love Chinatown and Repulsion. Even if his victim has forgiven him now--giving him a pass would be a very bad precedent, it would open the door to all kinds of coercion of victims. But I believe Polanski should go to jail because there was a trial and there was evidence presented and he fled the country--not because of some tacky headline on A.V. Club.

Now we're at the point where if someone even suggests for a moment that maybe among this sudden avalanche of accusations some of them just might be opportunists he's considered completely out of line no matter how vigorously he expresses the disgust he feels for sexual assault. This is madness.

Posted by Setsuled at 12:00 PM
Email ThisBlogThis!Share to TwitterShare to FacebookShare to Pinterest