Lord of the Silhouettes 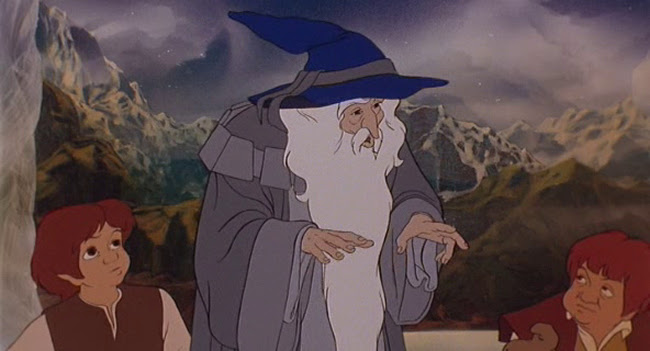 If I had a nightmare after staying awake for two days spent drinking and reading Tolkien it might be something like Ralph Bakshi's 1978 Lord of the Rings. I have a lot of respect for Bakshi and there are a lot of good ideas in this movie. It is often effectively frightening but it comes nowhere near being all the things a Lord of the Rings adaptation needs to be. 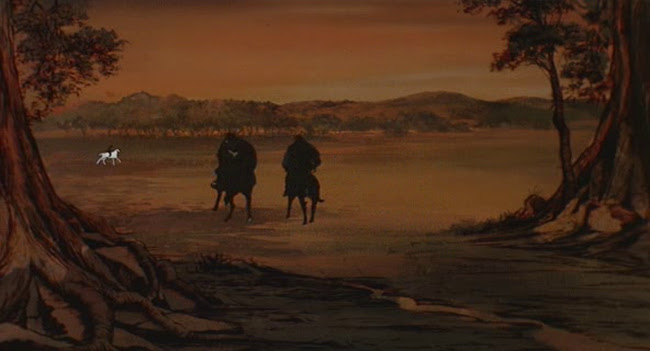 I don't think all the horror is intended. Bakshi's extensive use of rotoscoping gave some of his films the infamy to make them the Final Fantasy: Spirits Within and Polar Expresses of their day. It's been pretty well covered so I won't harp too much on it except to say it's one of the aspects of the film that makes it feel like a curiously degraded transmission. Almost like a found footage horror film. Watching the silhouettes of Ringwraiths stop across the river from Frodo (Christopher Guard), himself a man obscured behind flat, unshaded moving illustration, the figures' separation from the abstract or washed out backgrounds not only prevents anyone from seeming like they're actually in any of these places but combines to give one the constant feeling of inaccurate perceptions. Maybe it's the effectiveness of Bakshi's compositions and the anxious energy he succeeds in bringing across that makes this inability to see so disturbing. It's like going downhill blindfolded in a cart with no brakes. 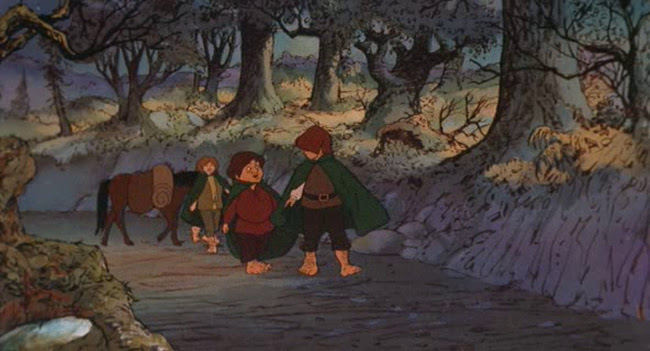 There was clearly a lot of work put into the backgrounds. There's a lovely Arthur Rackham quality to a lot of them, with muted colours and dark contours. This was likely part of a 1970s reaction against the myriad colours found in Disney movies of previous decades but unfortunately an expansive Disney palette would have been pretty useful in conveying the sense of a fully realised Middle Earth. Still, these chromatically restrained backgrounds might had worked fine if the characters actually seemed to inhabit them. 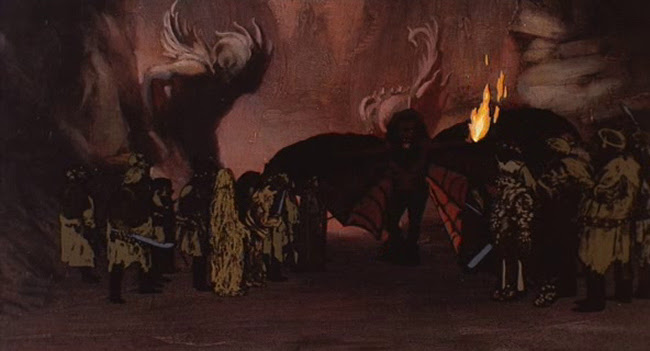 And yet there is a weird charm to it. It kind of reminds me of Lotte Reiniger's 1926 film The Adventures of Prince Achmed, the oldest surviving feature length animated film. Composed entirely of black silhouettes against solid colour backgrounds, it has some of the same mystery about it, though Bakshi's film seems to jar with his subject matter and intentions. 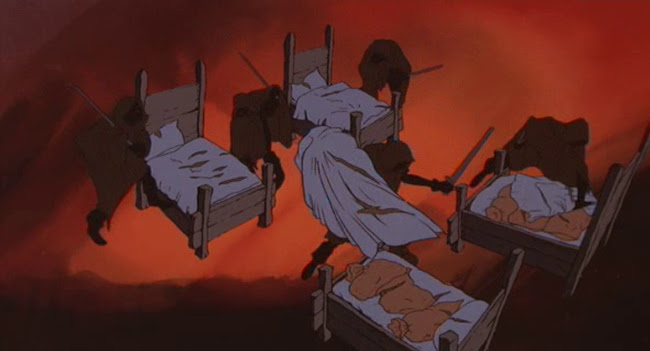 I hadn't seen the movie since I was a kid and I barely remembered it. Watching it last week, I was surprised how many times I spotted compositions Peter Jackson had borrowed for his film. I hope Bakshi's not bitter about that because it's nice to think something about his film endured in a good way.

Divined in crumbs, a hasty message lost.
Departure took the books and princes up.
A crown confers a long and heady cost.
Reflections top the toxic metal cup.
Recumbent cloaks assign a party hat.
To ev'ry infantry the air's a lance.
In troughs of charging lamps there swung a bat.
The trees in silhouette begin to dance.
A jacket kept from dust and sight the book.
Amassing drapes, a rain of cherries fell.
The curtain call compelled another look.
Again unheeded rang the broken bell.
In decades claimed for starchy billing rooms
A baking shroud in foil softly looms.