Life on the Comet Cannon 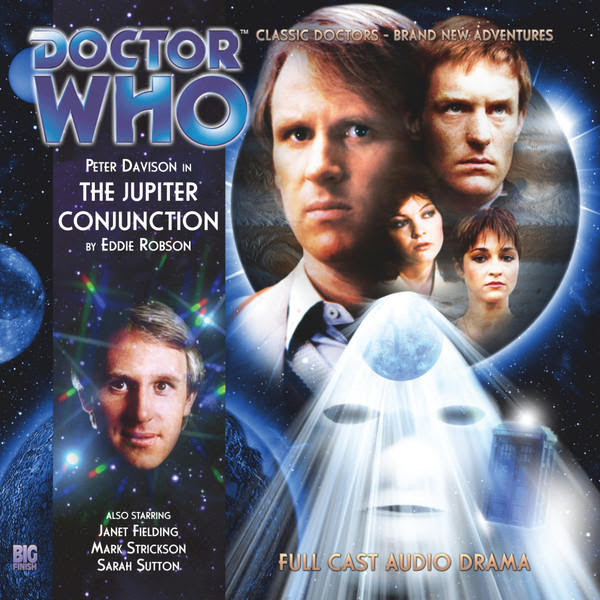 The Doctor must deal with an inhabited comet turned into a weapon in the 2012 Doctor Who audio play The Jupiter Conjunction. Though it's Turlough who seems to do most of the work in much of this nicely put together Fifth Doctor story.

There's some kind of shifty political alliance between Earth military and a previously unknown vaporous sentient species from Jupiter. There's an amusing and disturbingly prescient propaganda effort by the villains--though the instruction from one character to a subordinate to "hack the Internet" seems slightly dated the premise certainly holds water. It makes one wonder if the Russian propaganda machine that helped elect Trump is going to try making an alien invading force look good one day.

The Doctor (Peter Davison) and Turlough (Mark Strickson) find themselves imprisoned at which point Turlough takes the lead. I liked that writer Eddie Robson wanted to capitalise on Turlough's talent for being a turn-coat, it's only a shame the Fifth Doctor has to go into the fussy older brother mode he sometimes goes into for this to happen. He's caught flat footed when Turlough offers to give evidence against the Doctor in exchange for immunity but it's still fun hearing Turlough's clever plan unfold.

Nyssa (Sarah Sutton) and Tegan (Janet Fielding) are also in the story and though neither has nearly as much interesting material the climax gives Nyssa a nice moment.

A letter passed from hand to hand delayed.
Electric message roused a sleeper late.
A day without a year, a bed unmade.
They crossed the darkest road but scratches wait.
A vivid lemon stage enfolds the dance.
A stair divorced of house collects the lost.
The scarlet springs behind the eye advance.
A melted ceiling's weight concealed the gloss.
Where wood and carpet stood's a dead discount.
The plastic claws of saints divert the feast.
As scissor leaves construct each new account.
Persistent lines exclude a crimson beast.
Divided words return unwritten drinks.
Beneath a mirrored moon a surface sinks.