Fright with a Dash of Delight 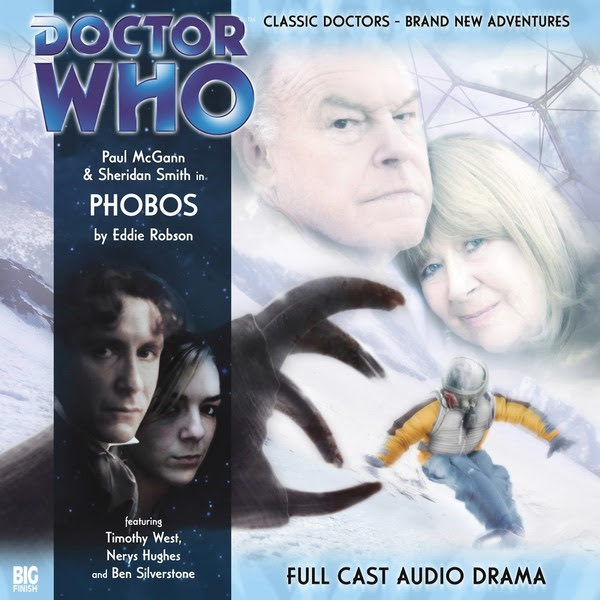 Doctor Who stories about beings that feed on specific emotions seem to be numerous enough that the 2007 Eighth Doctor audio play, Phobos, parses the suitable emotional fodder to being quite a lot of fear, but not too much fear, and always mingled with a certain amount of euphoria. The writer, Eddie Robson, was only 29 at the time but the story's condemnation of thrill seeking tourists by a peace and quiet loving elder generation seems at first like it was written by someone much older. Incidents of the Doctor grandstanding in the story definitely feel like the work of a young man, though. Maybe not one of the best audio plays but not bad, most of its faults resulting from the short length of shows from the Eighth Doctor's series.

The Doctor (Paul McGann) and Lucie (Sheridan Smith) find themselves in a precarious spot halfway up a mountain when they emerge from the TARDIS. A couple adrenaline junkies or "Drenies" turn up to inform them they're on Phobos, the Martian moon, where, in the future, people go to indulge in extreme sports like bungee jumping and "gravity-boarding". But a greater danger lurks in the shadows, according to old man Kai Tobias (Timothy West) whose dislike of the noisy young interlopers coincides with his repeated warnings about a deadly indigenous lifeform no-one's ever seen. But then people start winding up dead. Without getting into too many spoilers, this story does feature a direct Scooby Doo reference (". . . if it weren't for you meddling kids!").

But the story really does have a creature that feeds off psychic energy, whose appetite for slightly pleasurable fear causes it to stir up suspicions in an alien tourist (Tim Sutton) that the human tourists have been making racist comments behind his back so the large furry fellow can sucker punch one of them. I guess the idea is first there's the fear of being the target of discriminatory insults and then there's the pleasure in getting revenge.

The climax of the story is one of the instances where a psychic vampire gets more than it bargained for trying to feed on the Doctor who has an ominous speech about how he's seen and experienced terrible depths of fear, much more than the creature can bite off let alone chew. Paul McGann sells it really well.

Posted by Setsuled at 6:50 AM
Email ThisBlogThis!Share to TwitterShare to FacebookShare to Pinterest
Labels: audio play, doctor who, eighth doctor, paul mcgann, phobos