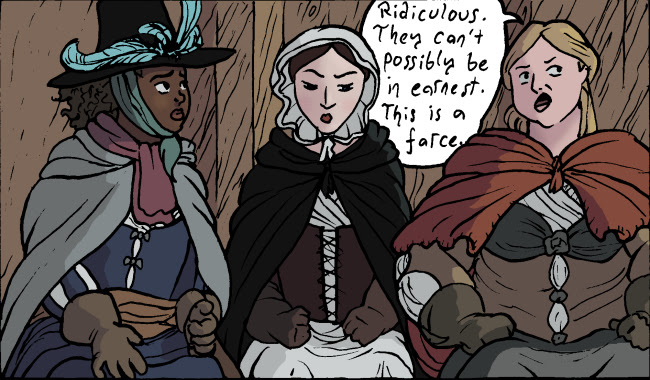 Those interested in canon court matters may be pleased to find my infrequently updated webcomic, Dekpa and Deborah, has its first new chapter since September. Over five months! I'm determined to get the next chapter out much quicker. This one was delayed by a lot of time spent writing a research paper. This particular chapter, and the one before it, required some research though I did most of it in early 2018 and 2017. The two latest chapters of Dekpa and Deborah deal with the true circumstances following John Milton's death, when his brother, Christopher, who was a Royalist and therefore ideologically John's opponent, and Betty Milton, John's wife when he died, filed a nuncupative will--that is, a will spoken rather than written. Since John was blind, he was obliged to do all his writing this way.

There was a bitter and, as some biographers and commentators consider it, embarrassing dispute between Milton's daughters and the team of Christopher and Betty regarding the veracity of this will. The court documents remain in existence and its one of the few direct pieces of information about John Milton's family that didn't come from John himself. So it's a valuable item for me since John's daughter, Deborah, is one of the main characters of my comic. Of all the characters in this new chapter only Dekpa is my invention and presents my interpretation of the events, what I think may have happened in the world outside those documents. So let me take you back to December, 1674 . . .

An olive rolled between the cobble stones.
A giant's steps were marked in crimson shade.
The strongest house's timbers cracked as bones.
The morning's breath in fog begins to fade.
A diver shaped the air with freezing hands.
As clouds begin to slow they change to damp.
A thirsty story's told in sifting sands.
The message came but late to warn the camp.
Umbrellas gather late to wash the sun.
In careful carried vessels water drips.
In silhouette the crow was like a nun.
Her higher rank was told in godly pips.
Between the words a plantly human grows.
As flower closed apace they changed to toes.