People are Other People in Space 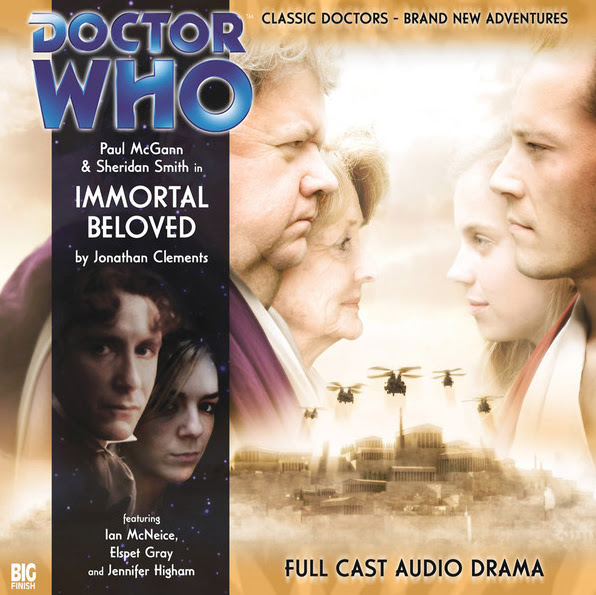 Immortal Beloved, the 2007 Eighth Doctor Doctor Who audio play, doesn't seem to have anything to do with Beethoven or the 1994 movie of that name. In this story, the Doctor (Paul McGann) and Lucie (Sheridan Smith) arrive just in time to prevent a pair of young lovers from committing suicide but unfortunately this leaves the kids vulnerable to the fate they were attempting to escape; having their brains wiped and their bodies used as replacement vessels for the elderly. So, yes, in case you had any doubts, that idea wasn't original to Get Out. I'm pretty sure it's not original to this audio play, either, but I can't think of older examples just at the moment.

It's a nice audio play, a short, 60 minute episode from the Eighth Doctor's series. Once again, though, it feels much too short, really not having enough time to establish the world of colonists and the love stories involved. The leader of the colonists, played by Ian McNeice sounding nicely like Michael Gambon, calls himself Zeus and his wife (Elspet Gray) is called Hera, their whole society modelled on ancient Greek myth. The mixture of sadness and repulsiveness in these characters trying to stave off death by murdering their own clones is nicely introduced but doesn't quite have enough time to develop.

Eight and Lucie continue to develop romantic chemistry, too, though it feels a bit rushed. I assume they've been on more adventures between episodes but it feels too soon for Eight to talk about how much she means to him at the end of the story. Sheridan Smith's performance sometimes makes her sound like Charley, Eight's first companion from the monthly range of audios, whose relationship was developed with him much more organically. There is a nice moment in Immortal Beloved where Lucie's trust in the Doctor is tested, though.

Intentions saved a pack of gum from Hell.
Tormented tay attempts to sate the gut.
Of course the soup would fill the copper bell.
Unless we added just a single nut.
No mixture makes a really solid link.
As choral timers tick the pulse of feet.
A hoofless carriage brought a horse to drink.
Where knees and clouds at stations lately meet.
Intruding clouds confused the store with rain.
No falling peppers splashed the tile floor.
So boosted wheats and rice were muffled grain.
Entire crops were crowded round the door.
A certain ice was sweetened near the stove.
A troop of shades assembled near the grove.