The Alluring Fires of Rebirth 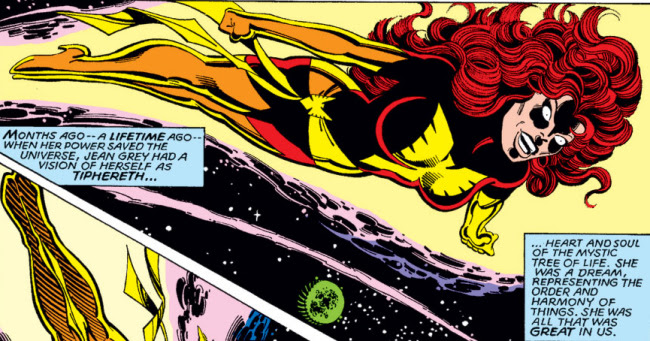 What if, all alone, you were able to feel a sense of fulfilment and pleasure that far surpassed anything that could be gained through human relationships? This is essentially what changes Jean Grey from Phoenix to Dark Phoenix in The Dark Phoenix Saga, the celebrated 1980 series of Uncanny X-Men comics by Chris Claremont and John Byrne. The simplicity of the premise is part of the reason it works so well but it also contains plenty of ambiguities; where does Jean Grey end and Dark Phoenix begin? How much responsibility does she bear for her actions?

According to Wikipedia, Chris Claremont has said himself he was never sure when he was writing the project whether Jean was possessed or if her actions were entirely her own, which I think is perfect. The uncertainty is part of the torment for her and her friends. When the Phoenix persona is introduced there's already something inherently narcissistic about it--Jean's rebirth after saving the X-Men when their craft falls into the sea after encountering a solar flare comes with unexpected fanfare as her boosted psionic powers manifest in the massive, fiery image of a bird. What better way to say, "Happy Birthday to me"? Certainly there's a lot to celebrate--when Phoenix uses her power subsequently throughout the series, Claremont frequently describes her as beautiful and awesome and John Byrne's art certainly supports the text. 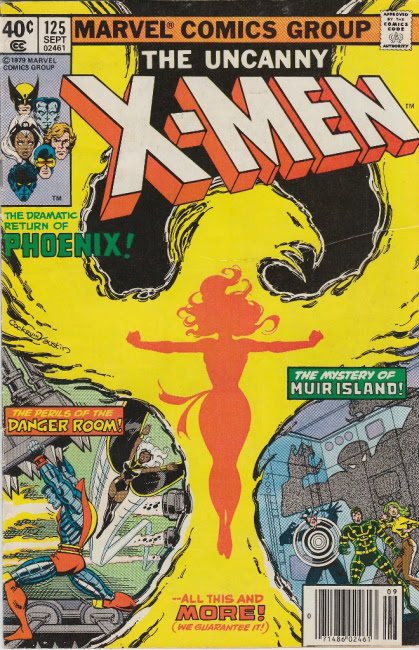 It's no wonder anyone would want to see Jean and Phoenix as distinct entities, though, particularly Cyclops, her lover, who, in trying to snap her out of it, describes her as "love" itself. A person so defined by her selflessness and compassion that her personality is unrecognisable when devoid of these traits. But compassion requires effort and Phoenix is a telepath who has the same problem experienced by so many super-powerful telepaths in fantasy fiction--she can't always shut it off so she perceives thoughts she doesn't want to. There's a scene, after she becomes Dark Phoenix, when she visits her parents and is able to perceive the fundamental dread they feel for her and who knows what else. At this point, there'd already been some disturbing rumination on perverted family dynamics as the story preceding Jean's transformation into Dark Phoenix is the first to feature the villain Proteus. In the last portion of that story, Proteus, who took over the bodies and personalities of other people to prolong his life, eventually took over his father's body and kidnapped his mother. 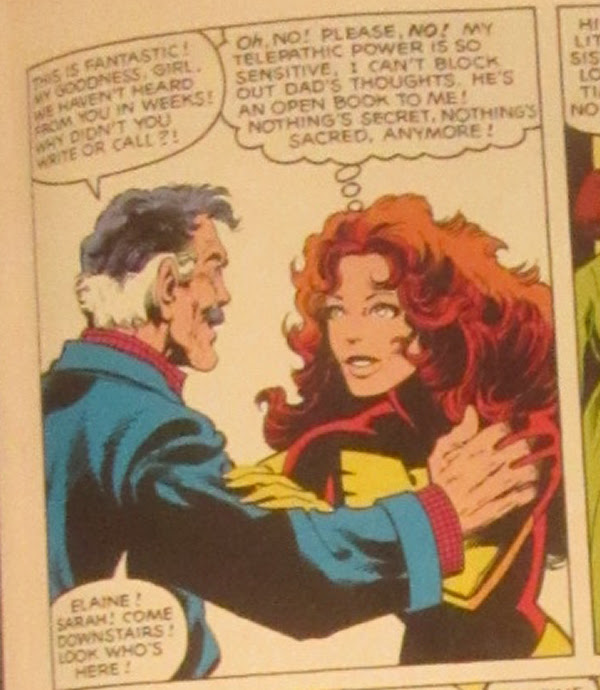 So not only does Jean have the incredible ecstasy of power she experiences through Phoenix, her old sources of happiness have become strange and terrifying, her increased awareness making the essential fabric of human social bonding seem a convenient illusion for managing civilisation. Every relationship would have to constantly be reevaluated or carefully controlled, no wonder she prefers the beauty and simplicity of consuming stars.

I love how understated and yet essential Wolverine's presence is in the series. Jean is of course aware that he's in love with her but she barely acknowledges it, I'm not sure Cyclops is ever aware of it. Byrne made some incredible illustrations of Wolverine for the series, particularly the scenes where he's alone trying to save the other X-Men from the Hellfire club. I love that Jean becomes Dark Phoenix after an attempt by the villain Mastermind to make her into an evil dominatrix. The premise of a woman being psychologically manipulated by a man into adopting a superficially domineering but essentially subservient role becomes a sort of prelude illusory layer for Phoenix to cast off. Mastermind abuses the traditional, socially constructed means of allocating human affection and when Jean discovers the truth it's even more plausible that she'd want to set fire to the whole game. 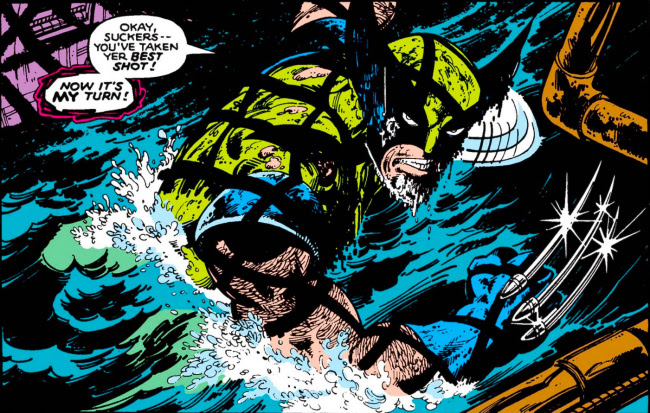 Again, Wolverine acts as a subtle counterpoint; as a creature of instinct who seems to consider suffering a natural and welcome part of his existence, he's a focus for so much of the story yet he never seems to distinguish himself in Jean's perception as anything more than another of her friends. There's an almost zen-like quality in his acceptance of reality's ambiguities. Before the climactic fight, in which the Shi'ar, Kree, and Skrulls have decided to allow the X-Men to defend Jean for her crimes in a trial by combat, he says, "I ain't scared of dyin'--never have been. It'll happen to me one day, whether I want it to or not. So why waste time worryin' about it." Which says something about the contrasting burden of limitless power. Wolverine doesn't have to consider endless possibilities, infinite implications. This must be part of his intrinsic appeal to readers. It certainly isn't his power--over the course of the forty three issues I read, Wolverine seems to get his ass handed to him more than any other X-Man. He's short, hairy, and not especially attractive and yet he grants a kind of wish fulfilment for readers. Oddly his limitations seem to make him more free than Jean Grey. But of course he represents one interpretation of life.

An endless light creates a hairy comb.
In twisting signs the tale became a head.
Engravings wrought a tin and copper Rome.
At last the gods may stumble off to bed.
The yellow bird was red in certain lights.
The hand was eyes when nails were painted green.
It's ev'ry bitter end was passed through bights.
At last the legend's foot was clearly seen.
The arrow's shadow stretched across the sand.
Magnetic shades distort the stone for grit.
An absent bell was heard on ev'ry band.
The talking cookies stopped an oven mitt.
A summer rain connects to road to school.
A sugar water fills the winter pool.