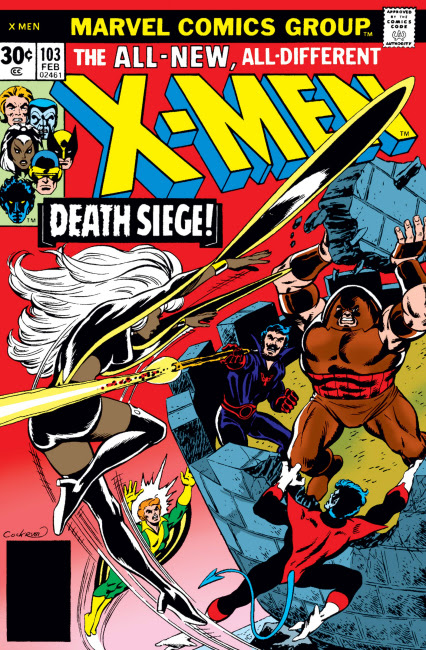 I've finally gone back and started reading some classic X-Men comics. I figured I'd read through from the introduction of the "new" X-Men in 1975 through the Dark Phoenix Saga because those are the comics I happened to have had sitting on my shelf for fifteen years. In 2004 I saw Barnes and Noble had released a "Masterworks" series of Marvel Comics collections. I thought this was great--finally, all those hard to track down back issues collected in an easy to find, affordable package. Only $12.95 for eight issues. I grabbed the first few volumes of Spider-Man and X-Men. I tore through Spider-Man pretty quick but for some reason never got around to X-Men. Partly I think it was because I found Chris Claremont's dialogue abysmally bad. I'd make it through Giant Size X-Men #1 and X-Men #94 and then I'd lose interest. I think I had four false starts. Well, now I'm all the way up to Uncanny X-Men #122 and am loving it. Once Claremont got into a flow his dialogue seems to have gotten less noticeably bad, at least in my opinion, and Dave Cockrum's excellent art gave way to John Byrne's even better art.

The best part, for me, is getting Storm's original introduction. She was my favourite comic book character in the late 80s and early 90s and I only knew her piecemeal from what random issues I got at the time, the animated series, the video games, and what I heard from people who'd read the older comics or who'd talked to people who'd read the older comics. It's that kind of thing that really makes me think comic book characters are like modern mythological figures, the way stories about them reach people in such a patchwork variety of ways. Of course, the important difference is that I never thought Storm was a real person.

Anyway, when I was teaching myself how to draw as a kid I used to copy the works of other artists and I remember carefully reproducing a big full page image of Storm by Jim Lee in one of the issues I had. Jim Lee's art is suited to being studied in isolation. Byrne's is much better suited to storytelling. 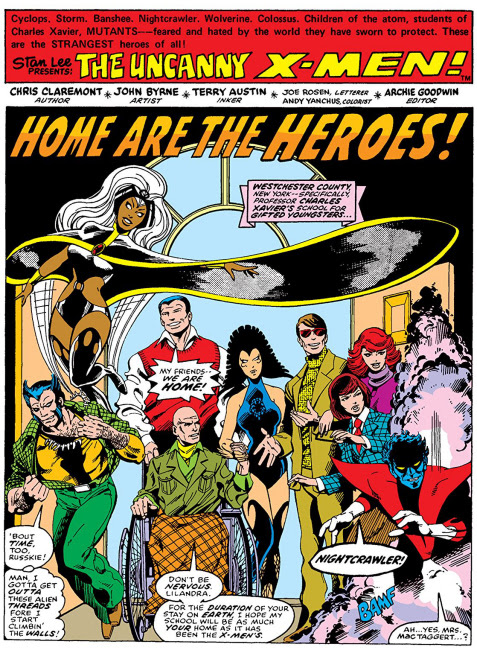 There's so much more expression in it, both in faces and body gestures, though Lee's certainly has a lot of intricate detail.

I was surprised how prominent Storm is in the issues I've been reading. In all the adaptations she's a relatively minor character but of the new X-Men introduced in Giant Size #1 she seems to quickly become the most important until Wolverine gradually takes centre stage. Her backstory is certainly the most complicated--she's introduced in Giant Size #1 with art by Dave Cockrum--I love all his complicated configurations of curves--as a living African goddess.

Then we find out she was a pick pocket in Cairo, trained by a master thief and an expert at lock picking, something that comes in handy in #113. In a really bizarre predicament, Magneto has most of the X-Men handcuffed to chairs and being treated like babies by a robotic nanny, apparently a revenge for Magneto having been physically changed into an infant. These two backstories seem mismatched yet they somehow work as intriguing instead of incongruous. What led this streetwise kid to depart for the wilderness upon discovering her powers? And what powers. I'm noticing that Clarement and Byrne frequently have to give reasons as to why Storm isn't able to use her powers--I guess being able to summon a hurricane at a moment's notice makes it hard to explain why she can't overcome certain foes. So they gave her intense claustrophobia, effectively shutting her down whenever she's in tight confines and adding yet another layer of backstory to explain it in the process. And there are several instances of explanations for individual problems, like her being tired from a previous battle, there being a competing enemy mutant controlling the weather, etc.

The only other character receiving half this much attention so far is Jean Grey. Wolverine seems a surprisingly minor character until John Byrne takes over as regular artist--the first several issues of the new X-Men seem to put more focus on characters that end up not sticking around for very long, Sunfire and Thunderbird. Good grief, I feel bad for any fans of Thunderbird, a somewhat stereotypical Native American X-Man who ends his run by doing something kind of embarrassingly stupid.

Nightcrawler is a delightful supporting character and I loved an arc set in Ireland where he meets a civilisation of leprechauns living in Banshee's ancestral castle. It's been a real pleasure finally reading these stories.

Convenient pockets hold a cheesy pen.
In paper tables figures dance to clip.
The boot within the stocking's staying in.
The Ruffle kingdom falls within the dip.
A plume of dust betokens hidden hats.
Collected heaps of swords await a day.
A rumour spread among the sleepless bats.
The mice had found a tiny secret way.
A line of letters fell in pathless books.
The time became a band for broken arms.
In ev'ry seat the cushions make the looks.
For ev'ry gem a rock can have its charms.
Beneath a set of cups were perfect shells.
Beneath a cracking dome were paper bells.