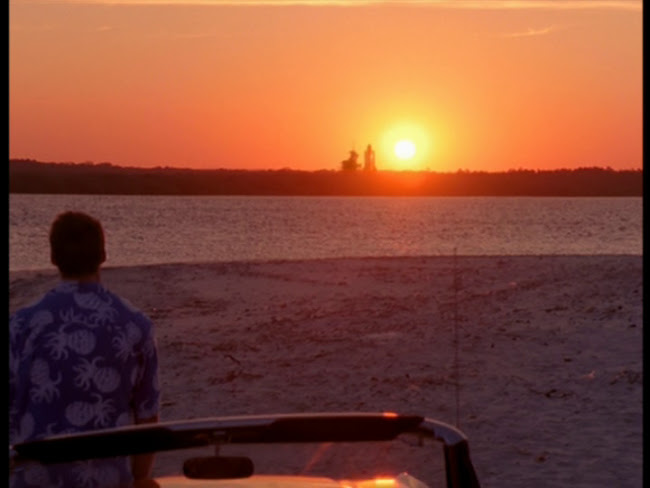 This year marks the 20th anniversary of the première of Farscape, one of the greatest Science Fiction and Fantasy series of all time. So I thought I'd watch through the series again and write new reviews of each episode. This should take a while because Farscape premièred back in the days when a season of a dramatic series was normally over twenty episodes. Series are shorter now, normally between eight and twelve episodes per season, and those seasons usually première on irregular schedules. There was a time when it would've been a really bad sign for a series to take a year off in the U.S. but now that's normal. But that's seen as a trade-off for a number of other things, including higher production values. One of the extraordinary things about Farscape is that its production design hold ups against anything being produced to-day. 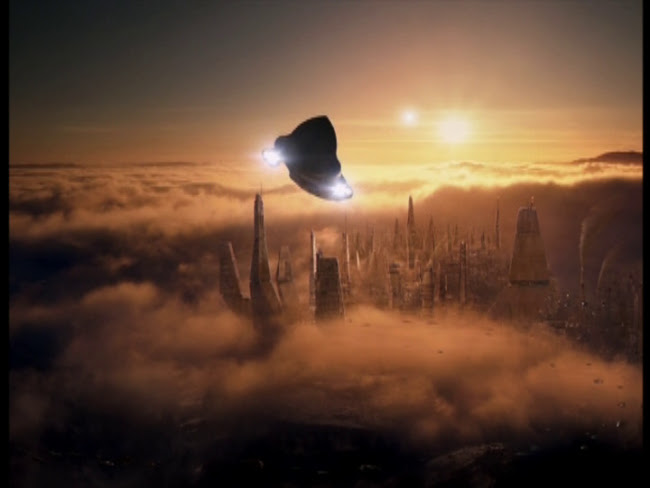 The first scene set on an alien world in the première episode is brief. But in only a few minutes we see fantastic costumes and puppets, each with intricate, careful designs and articulation. This toothy crustacean merchant only appears in a few shots: 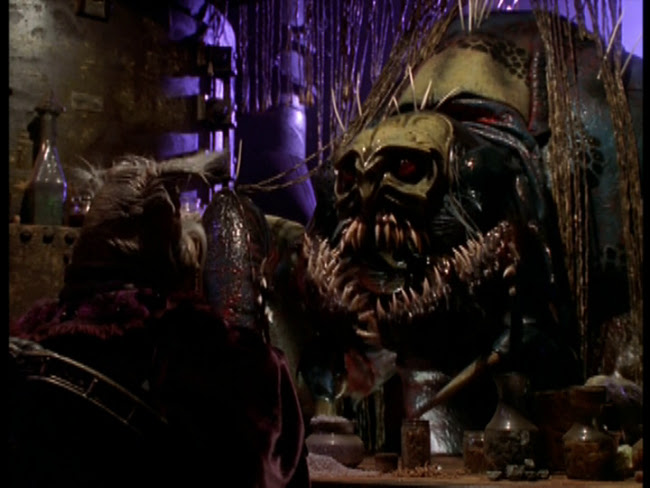 This is the work of the Jim Henson Creature Shop, this being a series produced by the Jim Henson Company with Brian Henson serving as executive producer. The series was created by Rockne S. O'Bannon, who at that point was already the creator of two successful Sci-Fi series, seaQuest and Alien Nation. A lot of the best writing on Farscape came from former Star Trek: The Next Generation writers David Kemper and Richard Manning and in the première episode one can see in O'Bannon's teleplay already ideas that play off of familiar Star Trek concepts. 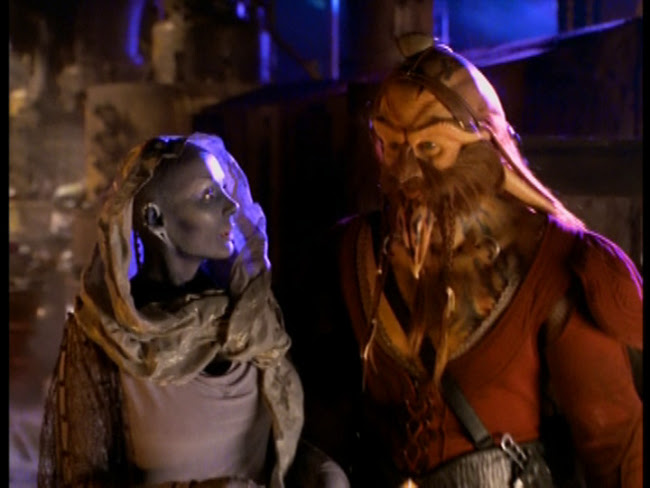 Two of the first alien characters we're introduced to, Zhaan (Virigina Hey) and D'Argo (Anthony Simcoe), seem at first like they might be versions of stock Star Trek and other Fantasy character types--the sensual, empathic lady of peace like Deanna Troi from TNG or Ilia from Star Trek: The Motion Picture; and the man from the warrior race, like Worf, his worldview founded on a culture that values battle and honour above all else. But the conversation between the two escaping prisoners quickly establishes them as misfits--Zhaan is a priest but also an anarchist and D'Argo was imprisoned for killing a superior officer. D'Argo's also only "thirty cycles", presumably around thirty years old, which Zhaan considers, with some surprise, "a boy", so his assertions of a persona that honours war takes on the character of a kid trying to prove his identity and worth by the standards of his culture. 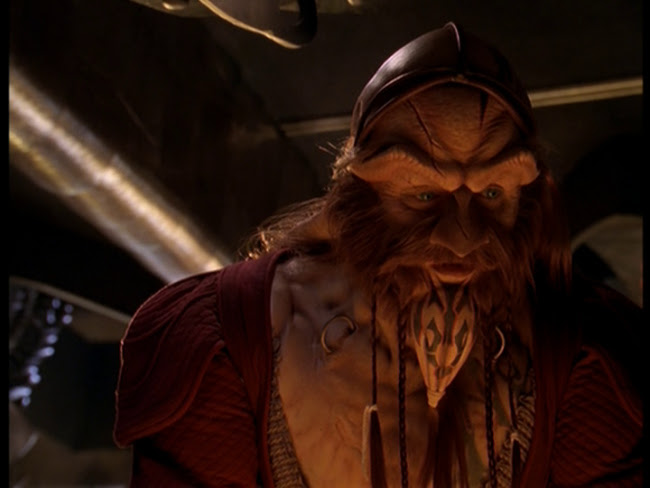 Of course they're misfits, though. They're criminals, the classic example of people who have violated the social contract in one way or another. But just about everyone in the première episode has a troubled relationship between their essential natures and their prescribed social roles. Rygel (Jonathan Hardy) was a "Dominar", a ruler, and when he first encounters the series' protagonist, John Crichton (Ben Browder), he immediately treats their relationship as political--he offers to protect Crichton from the other prisoners in exchange for protection later. But the little Rygel, smallest member of the crew, is as far from being a king as could be, his physique and his upbringing making him the least capable of asserting dominance on any issue. Aeryn Sun (Claudia Black) is a fighter pilot in Farscape's version of the Galactic Empire, called, with irony that would become Stalin or Mao, the "Peace Keepers". Taken into custody by the prisoners, she continually asserts her identity as a soldier and a Peace Keeper but is immediately expelled by her superior officer when she shows the slightest desire not to execute Crichton. 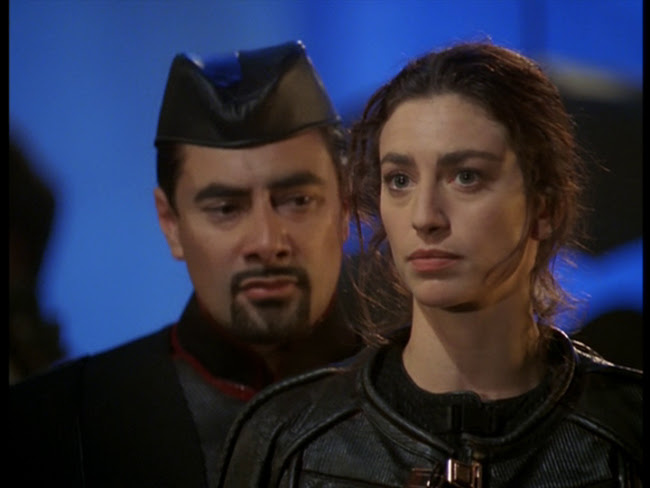 This superior officer, Crais (Lani Tupu), who himself becomes an increasingly misfit character, is clearly not especially concerned about any potential "irreversible contamination" Aeryn is exhibiting. Naturally a rigid ideological order like the Peace Keepers wouldn't approve of alien cultures which would thereby encourage alternate points of view but Crais' concern is more immediate. If he allows any nuance into the general interpretation of events then it creates the possibility of something standing in the way of his own goal. 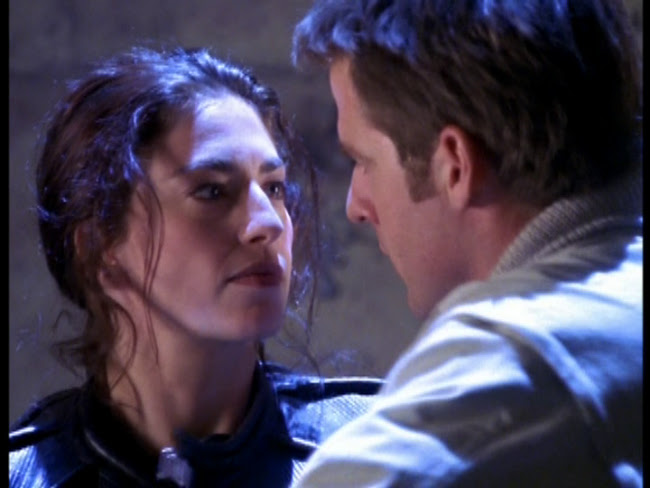 Aeryn may already be feeling some fondness for Crichton at this point but what she says is that she doesn't actually believe he's guilty of the crime Crais says he's guilty of--"I don't believe that he is brave enough or intelligent enough to attack one of our Prowlers intentionally." If the Peace Keeper goal is truly to stamp out wrongdoers, to create and keep peace, then identifying the true perpetrators of criminal acts through reason and observation would seem the logical path to securing those goals. But Crais has already seen the footage of Crichton's ship accidentally colliding with his brother's craft and, if he were rational, he would know that Crichton is not his brother's murderer. Crais has deliberately interpreted events against the evidence of his own eyes and he's mobilised the lockstep mechanisms of military bureaucracy to execute actions based on this narrative he's trying to assert. 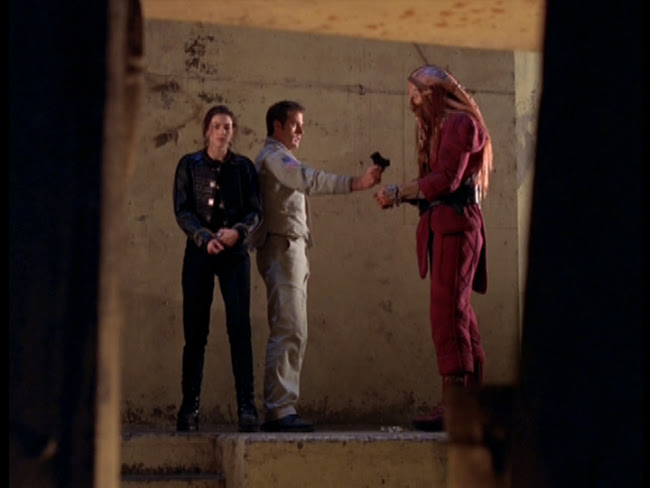 But was there ever a more guileless wanderer than John Crichton? I found myself wondering how any of the other characters might have handled the situation in Crichton's place. Throughout the series, Crichton's struggle with his isolation, the loss of everything familiar, every artefact and sensation of home, alternately creates effective pathos and comedy. But the fact that he's able to get anything at all done in this context shows he does have a very flexible mind, perhaps his life as a scientist and test pilot having nurtured a respect for recognising complexity and taught him the value in basing his actions on empirical observation.

And that's just the first episode. It's going to be nice watching this show again.

A storm of ants reduced a crumb to air.
Convenient leaves allow the grunt's ascent.
A golden morsel's lifted up the stair.
Without a word the Queen expressed assent.
A desert wheels a scene of light and dust.
Along the road directors trod to shoot.
The silent stones atop the hills combust.
A story spilled about a granite boot.
A set of cards collected ink and dates.
In rolling boxes thoughts become a note.
The early tapes were grouped with all the lates.
The rental store remained aboard the boat.
A flying barn remembers corner plants.
The metal legs were wearing scallion pants.

I have watched and enjoyed most, if not all, of the SCI-FI space related series starting with the original Star Trek through the various Stargate Series. However, after watching the entire Farscape series for the first time this past fall and winter, I consider it to be the best one of all.