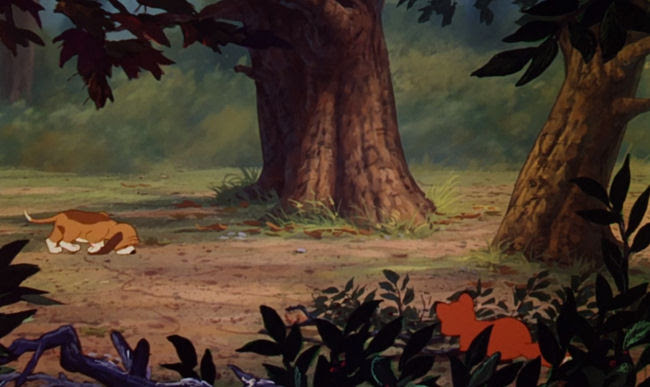 Can two people remain friends after one of them has become a serial killer whose victims often resemble the other? This is the question at the heart of 1981's The Fox and the Hound, a fascinating abomination from Walt Disney Studios. Plagued by notorious behind the scenes drama involving a change of directors and the abrupt departure of Don Bluth, it also included efforts from rising stars like Tim Burton and Brad Bird. Visually, the film is a vast improvement on Disney films of the previous twenty years and performances from fine voice actors, like Kurt Russell and Mickey Rooney, are very charming. But the songs are astonishingly bad and the story seems like it was written in a padded cell. In a bad way.

Xerography, the technology that had made Disney films look like crap for years, had by this time drastically improved. The Fox and the Hound is almost entirely free of the rough pencil marks that were left visible in films since 101 Dalmatians. For the first since 1959's Sleeping Beauty, a Disney animated film looked finished. The backgrounds, too, are gorgeous, almost on the level of Bambi, a tremendous improvement on The Rescuers. 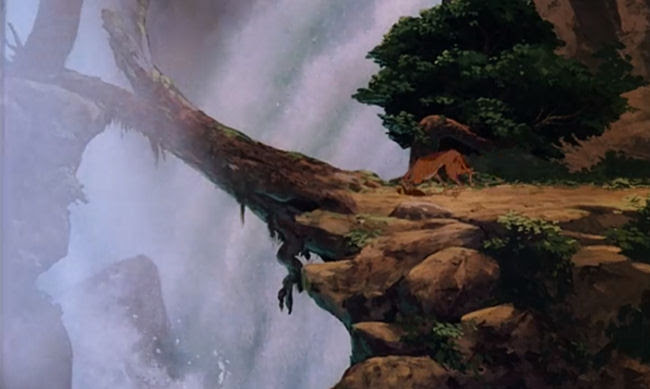 The Fox and the Hound invites comparisons to Bambi because it features an animal protagonist whose mother is killed by a hunter. One difference is that the animal is taken in by a human widow after being rescued by an owl. 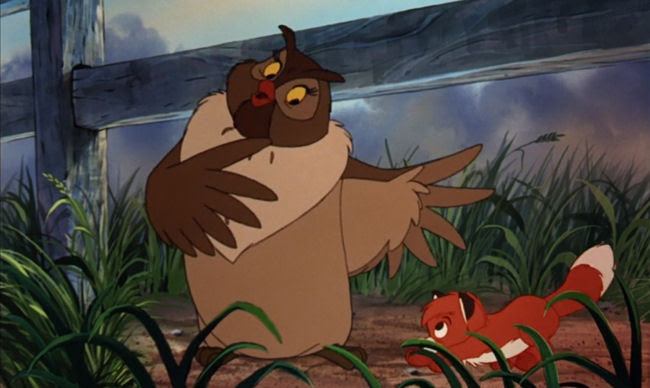 Called Big Mama, this owl doesn't look much different from the one in Winnie the Pooh but she's voiced by Pearl Bailey. A singer with a great voice, she's unfortunately burdened by most of the film's songs, some of the very worst in the Disney canon. At best, they're utterly forgettable, at worst they're insufferable periods of sonic cruelty. 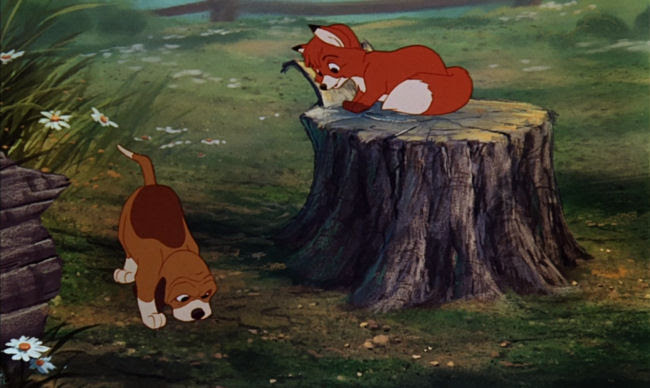 The fox, Tod, soon befriends a neighbour's hound puppy. The two are initially voiced by two effective child actors with Corey Feldman playing Copper, the hound, and Keith Mitchell playing Tod. Copper is decently animated but somehow Tod never captures the impression of a real fox's movements. The two remaining animators of Disney's golden era, Frank Thomas and Ollie Johnston, seem to have mostly worked on the film's two humans, both of whom are markedly better animated than the ones in The Black Cauldron, the Disney animated film that immediately followed this one. The Fox and the Hound would mark the elder animators' final project as animators. Like The Lady and the Tramp and The Aristocats, The Fox and the Hound is about an odd couple, animals from two different social strata. It's not as easy to convert them to human counterparts as we've never had a portion of society set aside for the purpose of sport hunting and who also happen to steal and feast on livestock. As the hound's mentor, Chief (Paul Buttram, who'd played several hounds for Disney at this point), and human, Amos Slade (Jack Albertson), are both portrayed as American southerners I suppose one can infer a comparison to American racial politics. In any case, the film opens a can of worms it's entirely unprepared to handle. 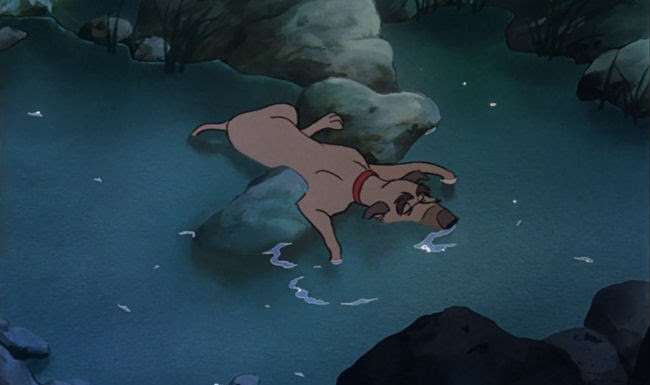 Bizarrely, one of the primary points of contention behind the scenes was over the fate of Chief. Originally, Chief was to be killed while chasing Tod in order to give Copper motivation to hunt his friend. The replacement director, Art Stevens, was against the idea of a main character being killed in a Disney movie, claiming such a thing had never happened before, apparently forgetting Bambi's mother. But that's not the only reason his reticence seems strange. By that point, we'd already had a scene where Tod discovered, to his horror, the collection of animal pelts and cruel traps kept in a shed by Amos Slade. We'd also seen Copper's return from the hunt with a cart piled high with pelts. 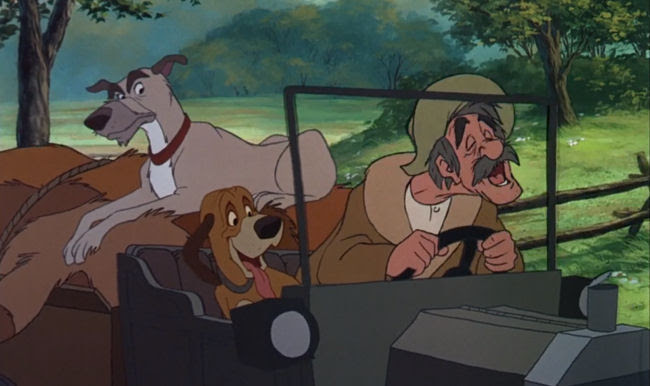 We're told Copper had killed a number of foxes, having been taught to do it by Chief and Amos. At play here are a number of cultural assumptions. Chief, despite harbouring a hatred for all foxes, is not quite portrayed as a villain. Hunting is assumed to be a normal part of life so, even though Tod and his mother are victims of hunting, we're not meant to take it as an evil thing. And yet we don't actually see Copper in the act of killing a fox, which seems like it ought to have been a crucial scene. To watch him make the decision to take a life would provide some context for the transition he effects from being Tod's best friend to being his implicit, natural enemy. We also never see the consequences of Tod being a carnivore himself--we never even see what he eats until he awkwardly tries catching a fish late in the film. 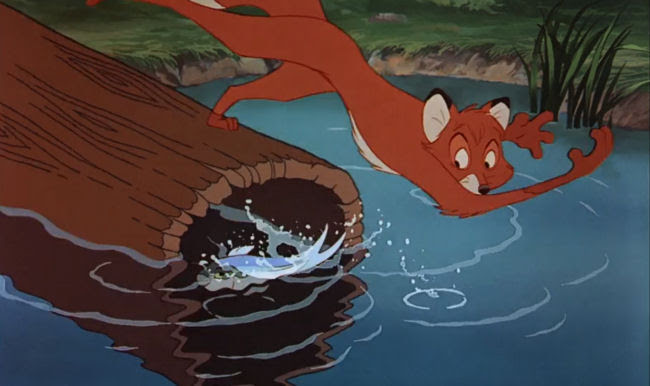 The problem here is fundamental to the story. The movie seeks to be about killing but it refuses to show any killing. This is a much bigger problem than the failure to show Chief's accidental death. In Lady and the Tramp, Lady is shocked when Tramp recommends chasing chickens, but part of the point of that movie is that Lady is sheltered. It's quite possible she never understood her food came from slaughtered animals. That movie found ways to address issues plainly while it avoided being too graphic for children. The Fox and the Hound tries to walk that line but instead just comes off as lacking necessary impact for adults and being too confusing for children. How do you answer a child who asks, "Why doesn't Copper play with Tod anymore?" You might say it's because Copper hunts foxes now to which the child might wonder how Copper could bring himself to do so when he and Tod were such good friends. There's a blank that needed filling in. 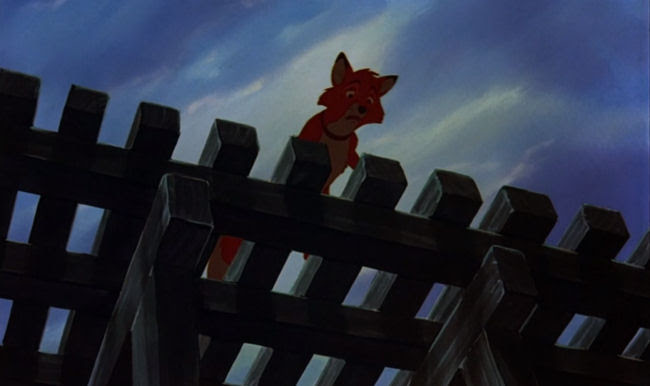 In some ways, Fox and the Hound heralded greater things to come with its cleaner animation cells and introduction of new talent. Yet it's also a complete mess. It's nice to see the studio trying something bold and new, it's only a shame they never seemed to have a clear idea of what they were doing.

The Fox and the Hound is available on Disney+.

Posted by Setsuled at 5:10 AM
Email ThisBlogThis!Share to TwitterShare to FacebookShare to Pinterest