Bees Out of Humour

Looks like they had a Venia's Travels in the Middle Ages, too; 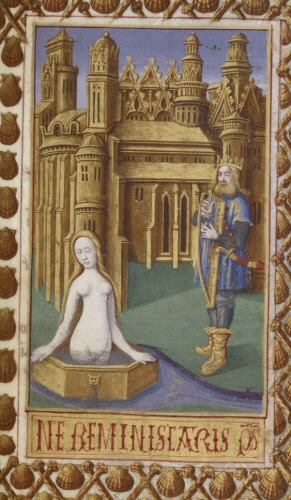 Actually that's from an illuminated old testament--the story of David and Bathseba. Smut for good Christians. View this carefully and disapprove. It's good to be a knight.

While inking and colouring last night, I listened to a rather amazing BBC radio production of King Lear with John Gielgud as Lear, Judi Dench as Goneril, Emma Thompson as Cordelia, Kenneth Brannagh as Edmund, Bob Hoskins as Oswald, and a sadly underused Derek Jacobi as the king of France. What little I've seen of Jacobi has made good on his reputation as an excellent actor, but for this production of Lear he has what I can only think of as an outrageous accent--John Cleese in Monty Python and the Holy Grail was only a slightly less believable Frenchman.

But it couldn't fail to be a decent production with that cast--apparently Gielgud was 90 at the time, but the age didn't seem to diminish his ability to perform.

Had honey on flatbread with my breakfast.
Tried to be Sabu in Thief of Bagdad.
Whose "pancake" under free honey he passed.
Tastes like but better than doughnuts I've had.

Posted by Setsuled at 5:31 PM
Email ThisBlogThis!Share to TwitterShare to FacebookShare to Pinterest