The past couple days have demonstrated to me what random, complete assholes guys can be to women. First I read Felis Demens' account of a strange guy who wouldn't get out of her face when she was trying to handle a traumatic situation. Then my sister told me about seeing a guy just outright beating a woman in a parking lot. My sister was at work at the time--she's a waitress, and she saw this out the window. A couple people, including a military guy, got up to immediately help the woman. The asshole ran into his truck when he saw people coming out and then tried to back up into the woman. He stopped when he saw someone calling 911, got out of his car, and took his license plate off his truck.

But apparently someone had already gotten the license number because the guy was caught. It turned out he didn't even know the woman--it was road rage. Apparently she cut him off or something. My sister saw her in the ambulance and said she looked like a tweaker. Maybe she was just rattled. In any case--how did we get to this point where a man starts beating on a woman in broad daylight? For road rage? I'm thinking there's got to be something to the theories about unnaturally belligerent behaviour in Americans caused by all the salt and sugar in the food. It reminds me of watching the Super Bowl and seeing the players hitting players on the opposing team--accomplishing nothing and getting penalised. People start shit at the drop of a hat they have no rational reason to expect good results from and they get punished for it.

Something's changed, right? I said to my sister yesterday I couldn't imagine a guy doing something like that in, say, 1936. Then last night I watched Kenji Mizoguchi's 1936 film Gion no shimai or Sisters of the Gion. 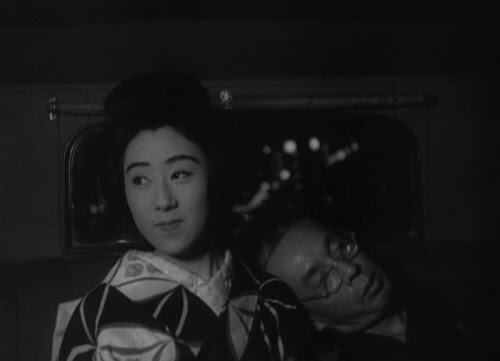 1953's Ugetsu is the only other Mizuguchi movie I've seen, and Sisters of the Gion is certainly a very different film. World War II changed cinema a lot in Japan, but I can't really gauge the impact it had on Mizoguchi from these two films. The differences seem more to reflect maturation as a filmmaker and a change in the kind of story the man was interested in telling. But both films have curiously definite resolutions with overt moral lessons which might take someone by surprise whose familiarity with Japanese cinema of the era doesn't extend past Kurosawa's meditations on man's moral uncertainty. But there's a richness to Ugetsu that Sisters of the Gion lacks that also serves to make its argument against greed and ambition more palatable.

But don't get me wrong, Sisters of the Gion's a good movie, a very straightforward feminist statement by way of a sort of sly subversion of the romantic myth of the geisha.

The first two thirds of the film are sort of adorable, seemingly a very light tale of men finding respite in the geisha house from their overbearing wives or demanding businesses. We see squabbles about the prices of kimonos and coy as well as genuine petitions from the geisha for patrons.

The film follows two geisha; Umekichi and Omocha, the former being the elder who's settled into the traditional lifestyle with tranquillity and the latter is a brash youth who's cutthroat behind the geisha makeup. In her opinion, the men are there only to use the women, and any underhanded manipulation on her part is fair play. The movie's constructed to seem as though it's going to be a story about how Umekichi's dedication to her patron pays off as the loyalty ends up being genuine between them in contrast to Omocha's cynicism being counterproductive. But at the end of the movie, both women are punished by the world of men it turns out Omocha was quite right about, though her mercenary instincts turn out to be insufficient. The sour note on which the movie abruptly ends casts a shadow over the charm of the rest of the film. That the older and seemingly wiser person turns out to be wrong and the younger, cynical person turns out to be right is a very sharp thing. You can easily picture Omocha maturing into a deeply damaged individual with a heart encased by a hard shell of calluses.

One compares this film to Memoirs of a Geisha, and it's easy to think we have taken a lot of steps backwards in the past seventy years.

I've decided days should not be this short.
I barely had time to cross Xanadu.
I do make martinis of the best sort.
Gin and just a pinch of vermouth will do.
Posted by Setsuled at 5:49 PM
Email ThisBlogThis!Share to TwitterShare to FacebookShare to Pinterest