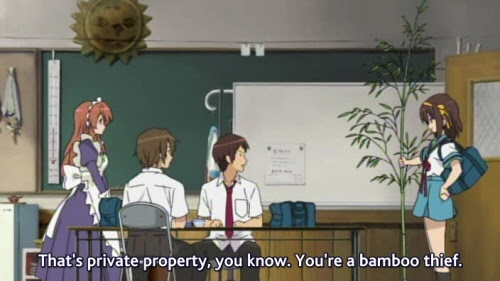 I watched the new The Melancholy of Haruhi Suzumiya with breakfast to-day, and was so happy to find it to be every bit as good as the first season.

Well, although this new episode is being called the first episode of the second season, as you can see from the episode list charts, this episode also could be considered the eighth episode of the series--I'm not sure, but I think it takes place before several of the "first season" episodes. In any case, it's the first new episode in three years and it's amazing to see things pick up right where they left off both in terms of tone and production quality.

For those who don't know, the series concerns a hyperactive misfit girl and her high school club, the "S.O.S. Brigade", the purpose of which is to investigate the possible existence of aliens, espers, and time travellers. Unbeknownst to Haruhi is that the five member club includes one alien, one esper, and one time traveller. The reason Haruhi can't be told the true identities of these beings is that Haruhi in fact controls and possibly created the universe--all existence is shaped by her whim, but she doesn't know it. This has a wonderful effect somewhat reminiscent to me of Neil Gaiman's Sandman series--when I read that series, I'd often find myself conscious of how Gaiman's anthropomorphised concept of Dream would reflect in his activities "real" dreams and stories, so one can study the world and people around Suzumiya and speculate as to what they say about her subconscious desires.

The fifth member of the group, Kyon, is the series POV, and his irascible but innocent, noir-ish internal monologue is a perfect counterbalance to the peppy anime girls. It also lends a feeling of credibility to the group's adventures--based on a young adult series of books in Japan, episodes like the new one, which is a nice time travel story, have some of the adventurous charm of The Chronicles of Narnia.

Looks like another good layer of dust.
Something else I have to find time to do.
As meals, in soup I have placed lots of trust.
You know, to-day, the fact is nothing's new.
Right now my mind is a sustained blank beep.
I vow to fall asleep in two hours.
In two hours, need to be sleeping deep.
I'll deploy all of my mental powers.
The white cat waited for me on the road.
In the middle--that mammal is fearless.
Rum's got me back into a tranquil mode.
But for defeating dust days, art's peerless.
Nobody can hear a tree fall in space.
Though space and time travel right by your face.

I'm starting to remember why I stopped buying altoids--I can't stop eating them for two minutes.
Posted by Setsuled at 6:04 PM
Email ThisBlogThis!Share to TwitterShare to FacebookShare to Pinterest