Questioning the Sex of the Alien Probe 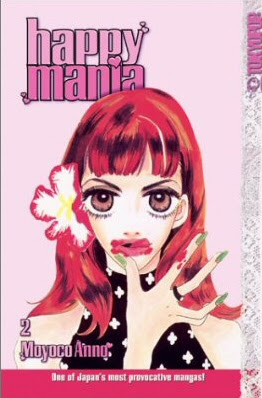 I just finished reading volume 2 of Moyoco Anno's manga Happy Mania, which continued the story of the promiscuous and hyperactive Kayoko Shigeta, a twenty four year old woman who tends to have sex with guys she doesn't know very well and starts to hate them when it turns out they like her, all part of an almost mindless but passionate effort to find a boyfriend. Anno's art style remains rife with overwhelming sensory features--the massive eyes, the massive lips, the spindly fingers. These details are crammed into massive, angled closeups of Shigeta with minimal location details that fits with the perfunctory pieces of information Shigeta takes in about the people and places around her. The manga shows a relentless, physical grasping for connection that's thwarted by a mind viciously and relentlessly introspective even as it's barely able to accept and interpret new pieces of information through a wall of libido. Shigeta reminds me a bit of Brundle-Fly from David Cronenberg's The Fly--overwhelmed by her own physical existence, Shigeta tries to digest love by spitting sexuality at everything to watch all potential lovers corrode as by acid.

Volume 2 introduces religion and rape into the tale. Religion in the form of a cult Shigeta's mother has fallen prey to--one of my favourite bits was Shigeta awkwardly kneeling in the cult's temple beside her mother, spotting a pubic hair on the floor, and forgetting about it totally the next instant. She meets the handsome son of the cult leader, has sex with him, of course, and decides never to speak to him again for no real reason, though the excuse she gives herself is that his bottom eyelashes are too long. Another favourite moment--as the guy's afterwards begun stalking her and Shigeta's hiding across the street from her apartment, waiting for him to leave, she explains dumping the guy to her friend by saying, "Didn't you see his bottom eyelashes?!"

Unfortunately, the guy turns out to be more than a stalker when he kidnaps and attempts to rape Shigeta. I think there can be value in stories that show someone who's done something bad, like Shigeta's treatment of the men she goes out with, given worse treatment than they deserve as punishment--mainly because I think a lot of people, like Shigeta, tend to beat themselves up a lot more for their own misdeeds than they deserve and posing the hypothetical drastic punishment in fiction can demonstrate to people, using their own internal devices of value judgement, that they don't deserve that kind of punishment.

Whenever rape is introduced in a story, it usually bears the weight of the audience's own, usually socially prescribed, perceptions of rape along with a long tradition of "damsel in distress" stories, which, if you have any analytical ability, you know are about rape, whether you're talking about King Kong or Robin Hood, and Happy Mania demonstrates why--because the stalker guy tries to rape Shigeta after they've already had sex. Rape isn't typically about sexual fulfilment, but about physical and psychological dominance.

There's almost an irresistible urge nowadays in modern stories of rape for starkly feminist subversions and inversions--like the recent Disney film Enchanted where the transformation of Amy Adams' Disney princess character is only complete when she takes up a sword and rescues a man from physical danger. The language of fantasy stories nowadays is such that a proactive role on the part of a captive female is practically imperative, and I'm reminded of last week's Dollhouse, which, as Moira I think was pointing out, had an ongoing theme of girls being rescued from abuse and hating themselves for not rescuing themselves.

Happy Mania features a male lead, Takahashi, who one senses is meant to be the "true love" Shigeta eventually ends up with. The story makes what is kind of the standard power compromise by having Takahashi do everything he can to help Shigeta while it's Shigeta herself who ultimately achieves her own escape. In a way, it's disappointing for an otherwise ruthlessly amoral story of sex to conform to the subliminal needs of the reader, but on the other hand, it was amusingly told. And what Shigeta does to the guy is viscerally satisfying. Which a really analytical reader might want to question themselves about.

Sure I should've gotten some fresh sake.
Or some kind of alcoholic beverage.
But, then, I didn't want any to-day.
My lack of booze yen seems like brain damage.

Yesterday I downloaded the new Rifftones album, which, in addition to Kevin Murphy's classic "When a Man Loves a Shark" also features Mike Nelson performing a nice Tom Waits parody tribute to Carnival of Souls called "Come to the Carnival". But the crowning achievement is Bill Corbett's ethereal "Sparkly Vampires", a gentle, twinkling lullaby for all those who've had Twilight forced on their awareness.
Posted by Setsuled at 7:21 PM
Email ThisBlogThis!Share to TwitterShare to FacebookShare to Pinterest