I went to Carmel Mountain yesterday. I stopped for lunch at an Olive Garden staffed entirely by beautiful Russian women. There was something wonderful about it. I overheard a customer who spoke Czech telling a waitress what the word for "thank you" was in Czech and asking what the word was in Russian.

Also in Carmel Mountain, I picked up the first book in the newly translated Sayonara Zetsubo Sensei manga. Just about a year and a half after the anime series premiered in Japan and became very popular among internet communities following the fansubs. Here we see the paralysis of the above the board anime companies.

Anyway, I recommend the manga. Del Rey's done an excellent job, beginning with the fact that they retained "Sayonara, Zetsubou-Sensei" as the title (though the second "u" is superfluous) instead of translating it to "Goodbye, Mr. Despair". Apparently Del Rey also retains all the Japanese honorifics like -san, -sensei, -sempai, and so forth and a key is included at the beginning. I love art that trusts an audience to be intelligent.

Last night I watched Akira Kurosawa's 1950 film Scandal (Shubun), which is in part a meditation on the eye of the beholder, starting with an interesting juxtaposition of a painter's impressionistic technique with a tabloid journalist's exploitive interpretation of a photograph.

The film opens with Toshiro Mifune as a famous painter named Aoe sitting on a hill painting Mount Kumotori. Three elderly local men have stopped to marvel at the strange painter who'd gotten there on a noisy motorcycle, an illustration of Aoe's brash and independent nature that will be reiterated throughout the film.

One of the old men, first looking at the mountain and then at Aoe's painting, remarks, "It's too red. Mount Kumotori ain't that red."

"Is that how artists work?" asks another of the old men.

I couldn't help thinking of my experience with the Something Awful forum--both the people I talked to there and the old man in the movie spoke from a fundamental lack of understanding of Impressionism and the necessarily subjective nature of art in general, though the Something Awful people were intent on feigning knowledge and are probably less likely of learning anything than someone like the old man. But in either case, the problem isn't that that the concept is too complicated, but that it's too simple and obvious. Of course the value in an impressionistic work is in its subjectivity, as a photograph can accomplish realism faster and better than a painting. As the Wikipedia entry on Impressionism puts it, ". . . photography actually inspired artists to pursue other means of artistic expression, and rather than competing with photography to emulate reality, artists focused 'on the one thing they could inevitably do better than the photograph – by further developing into an art form its very subjectivity in the conception of the image, the very subjectivity that photography eliminated.'" 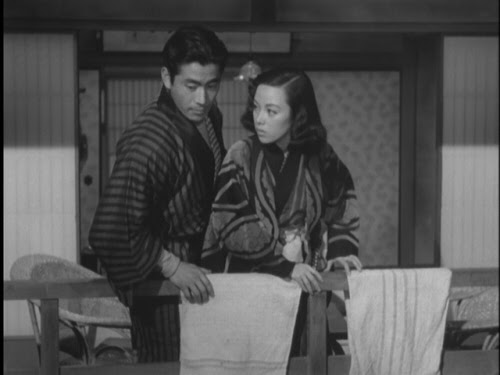 But Scandel next shows how photography can also be impressionistic by showing a photographer take a picture of Aoe and a famous singer named Miyako Saijo (played by the beautiful Shirley Yamaguchi) on a hotel balcony. The painter and singer had only just met, but a tabloid decides to interpret the image as evidence of a scandalous affair between the two celebrities.

Of course, the relative innocence of the time and place is revealed by how allegations of an affair between two unmarried people is taken as libellous by Aoe and horrifying by Saijo. But once one gets past this conceit, I think one can appreciate what's evidently Kurosawa's opinion on criticism--from Scandal's Wikipedia entry;

"Scandal was described by Kurosawa himself as a protest film about 'the rise of the press in Japan and its habitual confusion of freedom with license.' Kurosawa was noted for being exceptionally wary of the press in general (and didn't read any criticism of his own work, whether positive or negative)"

One needn't look very far to see Kurosawa had a very good point--look at how everyone was gushing about Wolverine before it came out, like the journalist who saw the leaked version and called it better than The Dark Knight. But now that prominent critics have turned against the film, so has much of the critical community en masse. The answer, of course, is that criticism is subjective and its value is in your respect or sympathy for the critic--in other words, whether you know the critic is someone whose tastes you generally share.

I see Mifune's and Yamaguchi's performances were negatively received for this film, which I find strange as it seems to me they weren't given much material, particularly in Yamaguchi's case, as both she and Mifune are sidelined when Takashi Shimura's character, Hiruta, completely steals the film as a weak-willed attorney and apparent prototype for his character in Ikiru.

Hiruta tells his daughter that he lives in a world of bad people who work to deceive him and so he feels a need to deceive others in self-defence, though in this case his defence mechanism has led him into collaborating with the enemy as he takes bribes from the tabloid after he becomes Aoe's attorney in Aoe's suit against the publication for libel. The theme of different perceptions and their fight for dominance is somewhat continued as an internal struggle for Hiruta when he has potential to act as an agent for either side.

It's not one of Kurosawa's best films, but I love the motivations behind it, and it certainly has a number of admirable aspects. One of the problems I had with the film, in fact, is that I found Mifune and Yamaguchi so charming that I wanted to see a torrid affair between the two. Though perhaps it was one of Kurosawa's intentions to show how the shy Saijo couldn't explore her feelings for Aoe thanks to the media attention as there is one scene where she goes to one of Aoe's exhibitions in disguise hoping to buy the painting of Mount Kumotori. 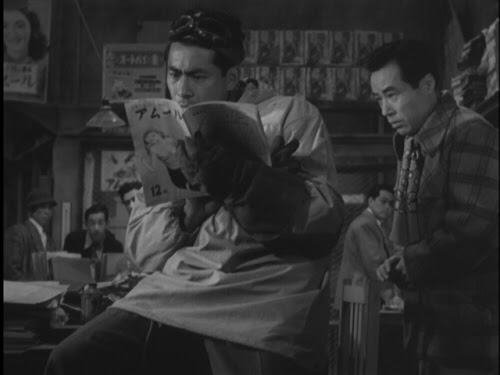 Mifune, at this point, was a handsome young man always filled with an evident, barely contained energy as he alternated between the suave gentlemen of films like this and Drunken Angel and the manic characters of Rashomon and Seven Samurai. When Aoe enters the magazine publisher office and quietly leafs through the article in a low angle shot while the magazine staff stands fretfully in the background I thought, "Holy shit, he's gonna murder those guys." You can feel the violence stored in those broad shoulders.

The gorgeous Noriko Sengoku, who played a gun moll in Stray Dog and a barmaid in Drunken Angel, is also in Scandel as Aoe's model who complains that he never has her pose nude anymore, to which Aoe replies, "I'm just beginning to have doubts about nude art in Japan. We lack both the tradition and the healthy spirit to accept the naked body. People say our nudes lack proportion. What they really lack is spirit." One might see this statement as a reflection of society's inability to see simple truth--whether it be the artistic truth of Aoe's work, or the truth in a world Hiruta thinks is built on deception.
Posted by Setsuled at 7:03 PM
Email ThisBlogThis!Share to TwitterShare to FacebookShare to Pinterest