Finding a Place When You're Nowhere 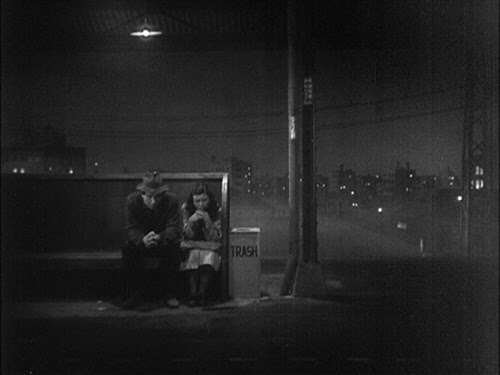 Before I let Friday get away from me completely, I wanted to mention on Thursday night I watched Akira Kurosawa's 1947 film One Wonderful Sunday, an almost Frank Capra-ish common man story tinged with the despair and poverty of post World War II Japan. It's still not one of Kurosawa's great films, but there are two fascinating scenes that make the movie well worth watching.

One Wonderful Sunday tells the story of a young, middle class couple, Yuzo and Masako, and a day off from work they spend together and try to enjoy with only thirty five yen.

The film is hampered a bit by the censors of the occupying U.S. government, but more starkly coming across in this film are some of Kurosawa's own biases which I'm familiar with--his love of children, his extreme disgust for yakuza, and his belief that women aren't as fundamentally flawed as men, which he at one point stated as a reason for the scarcity of female protagonists in his films. Indeed, Masako, one of the two characters to which the film is entirely devoted, seems absolutely pure, a person utterly devoid of the slightest character flaw. It's a little disappointing after the far more interesting Setsuko Hara character of No Regrets for Our Youth, but Masako functions well enough for the movie's best scenes. 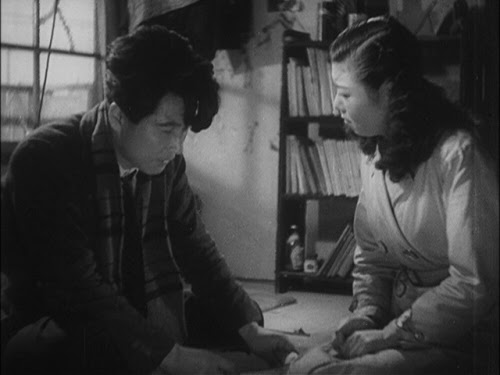 The first scene to really get its hooks into me comes at roughly the beginning of the last third of the film. After having been unable to afford tickets to a concert performance of Schubert's unfinished symphony thanks to some yakuza scalpers who also took the time to beat Yuzo to the ground, the couple remove to Yuzo's tiny apartment. Yuzo let's loose in a monologue of complete despair, his experience with the yakuza signifying the brutality of existence in Japan at the time, where a person's capabilities and honesty had absolutely no relevance. Yuzo turns to Masako then as the only good thing in his life and violently attempts to have sex with her. Not rape--he doesn't get more aggressive than clasping her hands, but his sudden lust comes from a place of clear emptiness that frightens Masako, who leaves after Yuzo responds to her refusal to reciprocate by sullenly turning his back on her.

One could read the scene as a dated perspective on the female libido--and the scene functions that way for anyone who might have that belief, but the more interesting interpretation of Masako being too crushed by Yuzo's hopeless selfishness is also perfectly viable, especially when Masako comes back to the apartment, meekly turns her back to Yuzo and very slowly begins to remove her raincoat. And here was a rather nice method Kurosawa used to get around censorship--this is the only time in the movie Masako even moves to take off her raincoat. Yuzo, now ashamed of his earlier behaviour, stops her from removing the coat. 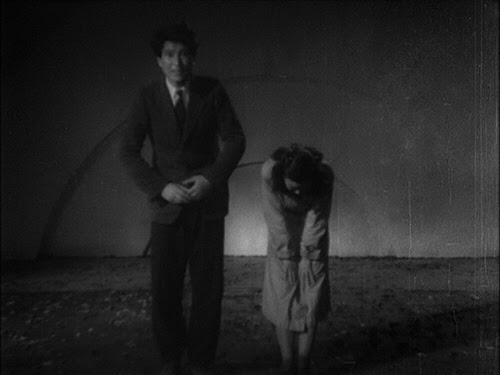 The second scene to really engage me is the penultimate and climactic scene where, in an empty outdoor amphitheatre, the couple, now in a playful mood, have been sharing idle fantasies. Yuzo decides to perform a pantomime of a symphony conductor as a substitute for the Schubert symphony they missed, but his cheer vanishes with the appearance of Kurosawa's familiar hollow wind sound effect at the moment Yuzo lifts his invisible baton.

Masako applauds for Yuzo in an attempt to bolster the fantasy, and for a moment it seems Yuzo's again in the mood before he seems to succumb to the meaninglessness of pretending, and we're reminded of his earlier monologue on his own meaninglessness in society. I was also struck by the idea of how personal the scene must have been for Kurosawa, a young artist at a time, and a man who suffered from depression which caused him to question the value of his work throughout his life.

In a rather bold move, Kurosawa then has Masako break the fourth wall and address the movie audience directly, asking them to applaud for Yuzo because, Masako says, there are poor young lovers like them everywhere and they need to be able to dream "beautiful dreams."

Yuzo and Masako eventually bow to the screen, as though the audience did applaud, and Yuzo begins to conduct dancing leaves as the soundtrack provides the Schubert. The movie doesn't provide a definitive happy ending for the couple, the ambiguity of the conclusion providing a nice prompt for rumination on the value of the human soul in a society that's particularly ill-equipped to validate individuals. But one might observe the idea is relevant in any society.
Posted by Setsuled at 1:00 AM
Email ThisBlogThis!Share to TwitterShare to FacebookShare to Pinterest