Here's an interesting response to someone threatening to commit suicide;

BEIJING – Chen Fuchao, a man heavily in debt, had been contemplating suicide on a bridge in southern China for hours when a passer-by came up, shook his hand — and pushed him off the ledge.

The passer-by, 66-year-old Lai Jiansheng, had been fed up with what he called Chen's "selfish activity," Xinhua said. Traffic around the Haizhu bridge in the city of Guangzhou had been backed up for five hours and police had cordoned off the area.

"I pushed him off because jumpers like Chen are very selfish. Their action violates a lot of public interest," Lai was quoted as saying by Xinhua. "They do not really dare to kill themselves. Instead, they just want to raise the relevant government authorities' attention to their appeals."

I don't think I've ever heard a story like this before. I'm not sure if this is indicative of a more callous society, or what. I sure hope someone's glad Chen survived.

I've continued watching Buffy the Vampire Slayer with dinner the past several nights. I'm digging the second season's themes of imperfect heroes and the weight of past sins. Last night I watched "Ted", the episode with guest star John Ritter. It's a great episode, but mostly what I was responding to was this outfit; 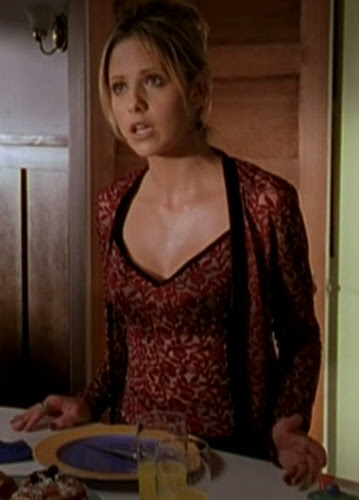 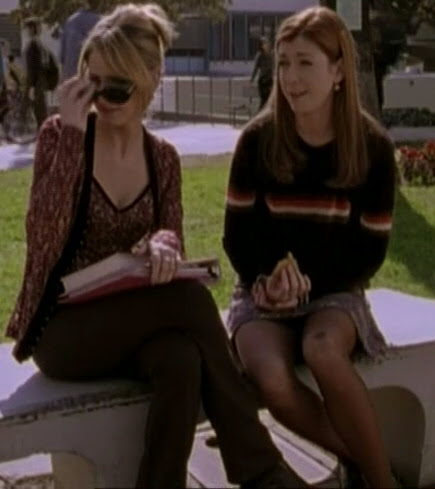 Gone is the first season costume designer, Susanna Puisto, replaced by the considerably more talented Cynthia Bergstrom. Though, aside from Drusilla's darling Regency gowns, the improvement had mostly been in how Buffy was no longer wildly veering between soccer mom and Tijuana crack whore. This outfit strikes me, maybe just because I have a thing for red floral patterns (cf this blog's border).

The show still has an inordinate number of teenagers in pantsuits (I think Hillary Clinton went to school in Sunnydale), but I don't mind when it's fun. Bergstrom seems to be employing themes with the characters, too--it's the 1960s for Cordelia, which really works for her here;

Prompting a compliment from Xander, but maybe goes a bit too far here;

It seems sleep deprivation for me's changed.
Now I only feel like shit at evening.
Can still almost think and act at close range.
But for distance the will's still found waning.
Posted by Setsuled at 4:24 PM
Email ThisBlogThis!Share to TwitterShare to FacebookShare to Pinterest