Life Bigger than but Vulnerable to Fear

Neil Gaiman, in a blog entry to-day, talked about potential legislation to overturn Bush administration policies regarding stem cell research and he linked to this comments page, which apparently the National Institutes of Health are paying very close attention to. Gaiman suggested people spread the word in their blogs and live journals because this is apparently something where a lot of comments expressing support for or condemnation of the research will make a big difference.

I never cease to be amazed by the ability of large groups of people to cling to utterly senseless and counterproductive ideas--no human life is actually threatened by the research, the embryos in question are destined for destruction anyway, and a lot of people can be helped by the research. It's incredibly simple.

Last night I watched Akira Kurosawa's 1955 film Ikimono no kiroku, which literally translates as Record of a Living Being, though for some reason Criterion decided to package the film under the English title I Live in Fear. I greatly prefer the more literal translation--"I Live in Fear" is more plain and sensational, almost sounding like a horror movie. "Record of a Living Being" emphasises by not emphasising--what sets apart the protagonist, an elderly businessman named Kiichi Nakajima (Toshiro Mifune), is indeed the fear that drives him to move his large family, mistresses, and illegitimate children to Brazil. But characterising him simply as a "living being" resists the caricature one might perceive him has for being totally controlled by fear of nuclear bombs.

You could call this movie Before I Learned to Stop Worrying about the Bomb, made as it was nine years before Dr. Strangelove. Record of a Living Being was also originally intended to be a satire, provoked by the public panic in Japan over recent tests of atomic bombs. But as Kurosawa and his screenwriters developed the story, they found themselves completely unable to maintain the detachment necessary for a satire--less than a decade had passed since the destruction of Nagasaki and Hiroshima. In his The Films of Akira Kurosawa, Donald Richie quotes Kurosawa as saying, "As we worked on the script it became less and less satire and more and more something else . . . And this would be the reason why the film might be thought incoherent--even chaotic. Still it was good we made it. Anyway, the way we felt--how could we have made a satire?"

According to Richie's book, composer Fumio Hayasaka, who'd worked on Kurosawa's films for ten years, was the impetus behind the film's production, and Richie quotes Kurosawa as saying of the composer, who would die in 1955, "When he said to me that a dying person could not work, I thought he meant himself. But he didn't, it turned out. He meant everyone. All of us. The next time I went to see him, he suggested we do a film on just this subject."

Both Fumio Hayasaka and Masaru Sato, who'd be Kurosawa's regular composer for years afterwards, are credited for Record of a Living Being's score. There's actually very little music in the movie, but I was struck by the eerie and sort of brash opening music which sounds as though it features a singing saw backed by saxophone and trumpet;

If I had to guess, I'd say the first part is Masaru Sato and the latter is Hayasaka, as brass instruments feature prominently in Sato's later work. 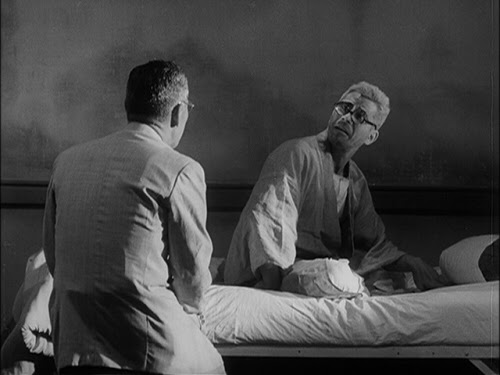 Mifune was cast as a man many years older than himself, a fascinating decision as the normal dichotomy of Takashi Shimura as the voice of maturity and Mifune as the conflicted youth is almost precisely reversed--Shimura in this film, often shown at home wearing pants and undershirt, looks remarkably youthful, particularly considering this is his last leading role in a Kurosawa film. He'd continue to appear in Kurosawa's films until 1980's Kagemusha, but only in drastically reduced roles, apparently due to advanced age hindering his ability to remember his lines.

The reversal here of the two actors' positions puts Mifune's violent anxiety in the position of power while Shimura's natural gentleness is in a position of uncertainty. It's quite effective, and I was surprised at how well Mifune fits into his role.

Most of the movie concerns the large family of the old man attempting through various legal means to prevent him from spending his enormous fortune in his efforts to escape nuclear bombs, and we meet a very large cast of characters, including the normally charming Minoru Chiaki as an effectively obnoxious son and the beautiful Noriko Sengoku, another Kurosawa regular, as a very quiet daughter. She only has one, very neutral line in the film, but her scarce expressions of emotion help broaden the world of people. She spends most of the movie serving tea, but a glimpse into her private dependency upon the family patriarch is visible after the destruction of Nakajima's foundry; 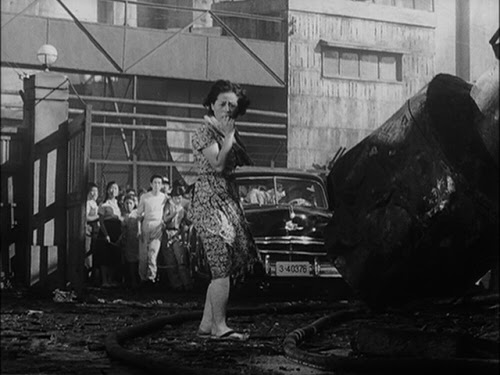 My favourite scene comes at the end of the movie when Shimura's character visits Mifune in an asylum, where he's been committed after destroying the foundry in the hopes of forcing his family to agree to move to Brazil.

The attending doctor at the asylum says to Shimura of Mifune's character, "Whenever I see him . . . I somehow feel . . . oddly anxious . . . even though I'm the one who's supposed to be sane . . . Is he crazy? Or are we, who can remain unperturbed in this insane world, the crazy ones?"

A couple guys in jail, where Mifune's character had first gone after his guilt in destroying the foundry was discovered, make fun of him for trying to escape nuclear war, and tell him nothing short of going to another planet would provide a reliable escape. In the asylum, Mifune's now convinced himself this is where he's ended up, as he says to Shimura;

"By the way . . . what happened to the Earth? Are many people still left behind there? Are there still many people there? That's not good. Not good at all. They'd better escape soon or they'll be sorry! Why don't they understand? They better hurry and come to this planet . . ."

Then Mifune gets up and approaches the window, for my favourite shot in the film; 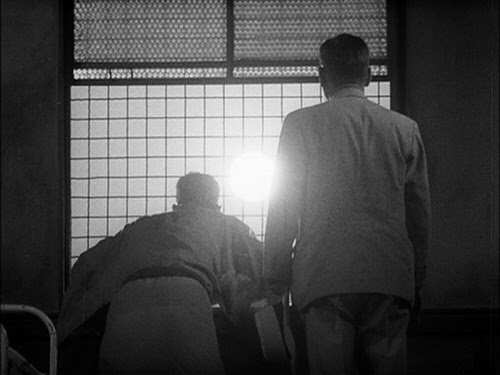 Best to avoid spawning where you might die.
Though just three nukes could spoil the whole world.
About survival, video games lie.
But koopa shells are lethal when they're hurled.
Posted by Setsuled at 7:16 PM
Email ThisBlogThis!Share to TwitterShare to FacebookShare to Pinterest