The Demands of Hunger

Had honey on flatbread with my breakfast.
Tried to be Sabu in Thief of Bagdad.
Whose "pancake" under free honey he passed.
Tastes like but better than doughnuts I've had.
To-day had scotch twixt two pots of coffee.
I felt like a sing-along bouncing ball.
Energy state's set now on atrophy.
Somehow green tea yet has a siren call.
Always, apples and computers conflict.
I think I've had an altoid "lost weekend".
Eating one whole tin used to make me sick.
But now in its bacta sludge I suspend.
Crackers as snacks aren't so terribly cruel.
They're now another piece of my meal pool.

I think these Kashi "Mediterranean Bruschetta" crackers I picked up last night will, as things to mindlessly munch on, leave me feeling slightly less irradiated than the altoids. 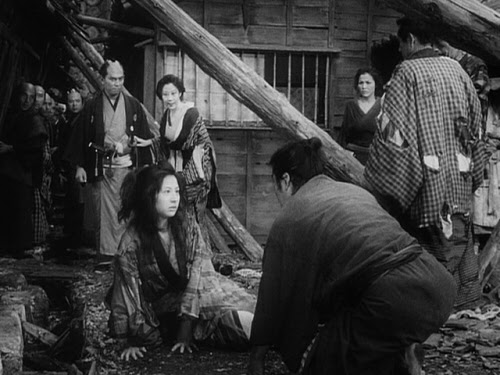 Well, it's a weekend after a Venia's Travels update, which means I've watched another Akira Kurosawa movie, this time his 1957 film The Lower Depths, an adaptation of Maxim Gorky's play of the same name. I'd never read the play, but I wasn't surprised to learn later that, aside from moving the setting to Edo period Japan, the movie's very faithful to its source. The entire movie takes place in two small locations, both of which lay at the bottom of an amazing, enormous, grimy pit. Kurosawa's simultaneous demand for historical authenticity and a reflection of characters in props and environment create a large dilapidated shack in the pit next to a smaller building for a landlord and his family. 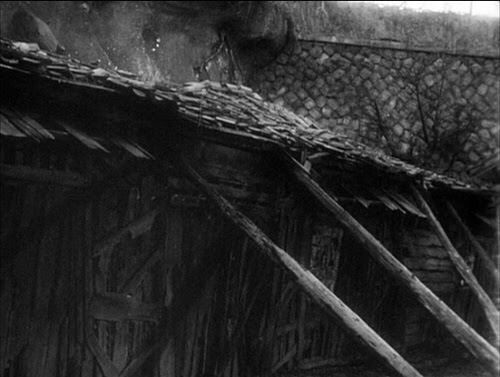 We can perceive the division of social status immediately from an early crane shot of the two buildings that show broken and missing tiles on the shack's roof while clean and neatly placed tiles cover the other roof--but the landlord's family are still desperately poor, only marginally ahead of the tenants in the shack who pay their rent in small quantities of scrounged pennies.

Kurosawa continues the contemplation of subjective reality he explored with Scandal and Rashomon and here considers the inherent value of delusion. I kept thinking of a line from Tom Waits' "Small Change"; "The dreams ain't broken down here, they're walking with a limp." The cast of extremely well drawn characters all exhibit the signs of mental illness that either led to their poverty or were caused by it and everyone seems to nurse his or her own thin delusion about themselves and the reasons the world has left them where they are--a prostitute tells a story about a kindly patron who told her she had the soul of a virgin, an actor talks about how thoroughly he used to win over audiences, and a tinker fiercely defends his status as the only craftsman of the bunch. 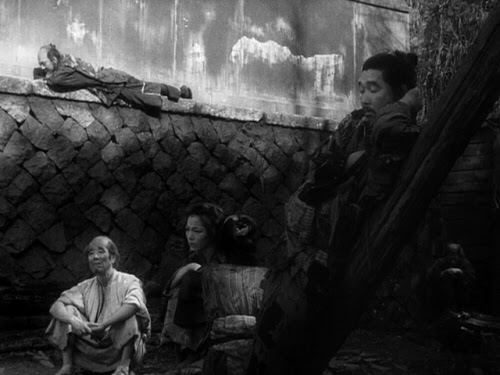 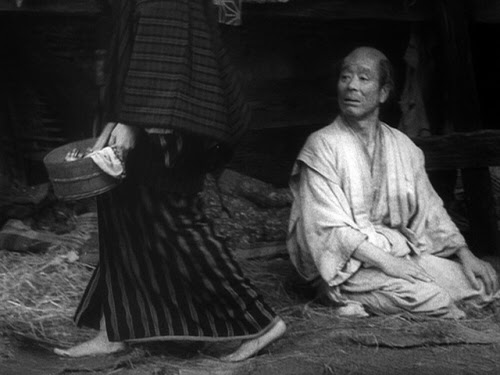 Various things I've read about the movie talk about how it has no central protagonist, yet I found the old pilgrim, Kahei, played by Bokuzen Hidari, to be the point of view character for the centre third of the film. Hidari, like most of the cast, was a Kurosawa regular who usually played meek or cowardly characters--perhaps most memorably the farmer Yohei in Seven Samurai. So it was interesting to seem him so effectively play what appeared to be the most stable and self-possessed person in this film. It's suggested, though never explicitly stated, that he might in fact be a fugitive only posing as a pilgrim, thereby making him the most conscious example of the type of illusory self-perception that occupies all the characters, and also the strongest argument for the lie as a positive. Kahei, in attempting to pose as a pilgrim, makes himself what is likely his ideal of a pilgrim, someone who offers spiritual insight and support to these people who need it more than most. That we never know for sure if he is a fraud somewhat reflects the audience's own relationship with the character--of course, we know he's the actor Bokuzen Hidari, and it's implicit that by watching him pretend to be someone he's not that we seek value in artifice. 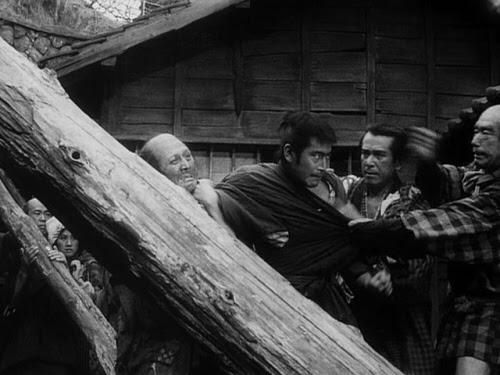 But top billing, of course, goes to Toshiro Mifune who, as the thief Sutekichi, is involved in one of the few tales of romance to appear in a Kurosawa film, and it is also a tale intimately engaged with contemplating the value of dreams. Sutekichi's desperately trying to convince Okayo, the sister of the landlord's wife, to run away with him. And here the story touches on the artificial nature of socially proscribed roles--Okayo says that she can't commit to leaving with Sutekichi because she isn't sure whether she hates him or loves him. And as the film establishes, the nature of Okayo's indecisive passion is such that her heart is ready to land in either territory, depending on which seems safer to her. Kahei's calming voice as he tells she is a strong woman who can be the support that Sutekichi, a poor young man constantly displaying the effects of a fiery internal conflict, needs. Kahei is here performing his role as a spiritual advisor, directing the hearts of confused people along the healthiest path, and Okayo's aim is shifted to loving Sutekichi by the attractive portrait Kahei has painted of her in the role. 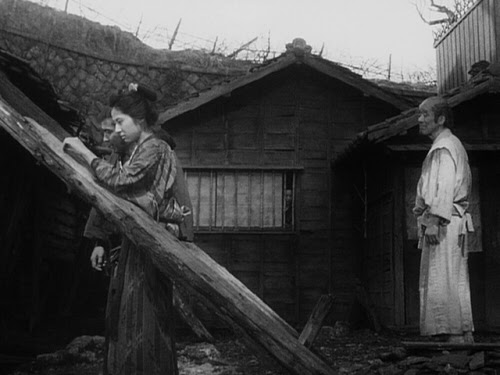 Sutekichi, meanwhile, has a bit of Mifune's Seven Samurai character in him, trying with a great deal of fire but also uncertainty to define himself, in this case as Okayo's husband. When the landlord makes to abuse Okayo, Sutekichi awkwardly asserts that Okayo belongs to him now.

This could easily have gone in a conventional romantic direction where the lovers' shared dream saves them from the trap they live in, but instead, with the sudden departure of Kahei, Okayo's heart shifts back at only one provocation, but not without some very clear psychological torment as Okayo wails and grips the wall, under the intense pain of an indecision born of two incompatible perceptions of reality brought into direct conflict inside her. 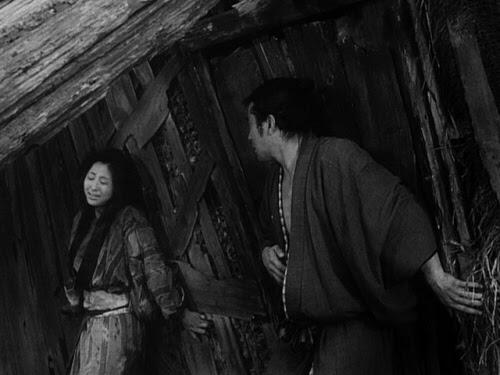 The final portion of the film discusses the limited power dreams have in saving people and even, in some cases, the counterproductive effect they can have as one man suffers depression at having to deny the reality that his wife beats him, and two other characters become suicidal from the directions their dreams take without Kahei's guidance and support.

Incredibly, this movie has a recurring musical number, which, in an essay by Keiko McDonald and Thomas Rimer included with the Criterion DVD, is described as evidence these people "live beyond the pale of the Buddhist version of salvation." The song is "a comic chorus that was popular in the Edo period. It is a Shinto shrine festivity, bakabayashi--literally. 'fools' orchestra'."

I was reminded of the fire festival song from The Hidden Fortress, Kurosawa's next film, which darkly described the plight of the poor, though it is otherwise a far happier film. But it does make a great deal of sense that Kurosawa would follow The Lower Depths with a rousing fantasy adventure about a couple of extraordinarily fortunate peasants.
Posted by Setsuled at 7:53 PM
Email ThisBlogThis!Share to TwitterShare to FacebookShare to Pinterest