Okay, so I won't be accused of burying the lede, I'll talk about James Cameron's Avatar right off the bat. I saw the 24 minutes of footage presented by Cameron himself as well as cast members Sigorney Weaver, Zoe Saldana, and Stephen Lang, and I can't say I was impressed. Others have already written about how the cgi doesn't look as revolutionary as Cameron has led people to believe, and indeed it suffers from an eerie, overly clean quality that plagues so much cgi and was reminiscent of what made the Star Wars prequels often less visually interesting than the original trilogy. But the main problem is conscience.

Before presenting the footage, Cameron talked about how he wanted to provide a fun, action packed experience for the audience, but he couldn't do that without giving the movie a "conscience". I was reminded of a line from Ani DiFranco's "The Waiting Song"--"your basic average super star is singing about justice and peace and love and I am glaring at the radio, swearing saying, 'That's just what I was afraid of. '" If the conscience feels like something you're obligated to say, you're doing it wrong. Indeed, the movie feels quite preachy, Zoe Saldana playing the cg love interest native on an alien planet with a curiously Jamaican accent is naturally more in tune with protecting the environment and feeling guilty about killing animals in self-defence than the protagonist, a marine played by Sam Worthington. It's Pocahontas in space--Disney's Pocahontas. Only not as fun.

I suppose it's not fair to review the movie as a whole from only a fourth of it, and yet the scene where Worthington's marine character meets Saldana's native rather clearly presented the film's philosophy, as did Cameron's own comments on the film about its relevance to the current climate crisis. Cameron talked about how, although the Navi, Saldana's people, were aliens, they represented the spiritually superior side of humanity, while the humans represented a corrupted side.

It's instructive to compare, I think, Avatar with a movie that successfully explored the relationship between industrious man and nature--Princess Mononoke. In Mononoke, there was no bullshit guilt when San had to kill an animal to survive, nor was there an attempt to suggest that the anthropomorphic representatives of nature were morally superior to the humans. Both sides were trying to survive, first and foremost, and therefore it becomes a more useful dialogue about two sides addressing needs. Cameron struck me as an artist grown utterly out of touch with himself, and this project came off as an exercise in self-flagellation in response to his earlier work which he seemingly now sees as lacking this "conscience".

The fact that Avatar's visually uninteresting seems to reflect Cameron's own insubstantial grasp of the issues he's attempting to address--Pandora, the forest moon on which the movie takes place, is mostly a riot of green and blue that comes off as noise--again, Mononoke's colour palette did better to emphasise both the wild diversity of nature and the force of its expression. Pandora, meanwhile, seems like a supermarket with shelves lined entirely with plastic plants.

It might also be worth noting that this movie isn't going to make any money. Cameron has attempted to take his rated R space marines from Aliens and put them into what's essentially a modern, socially conscious Disney movie, inevitably alienated both audiences, something which ought to have been obvious to everyone. All the geek guys sitting around me during the presentation were constantly shifting about uncomfortably in their seats.

But I wasn't completely sure what my feelings were about Avatar until Terry Gilliam came out to talk about his upcoming film, The Imaginarium of Doctor Parnassus, and I was reminded what a truly living artist was like.

Before he came out, a short retrospective on Gilliam's career was shown that was obviously put together by marketing to help establish the "Gilliam brand", as it were--it included the predictable "Lands beyond your imagination" title card, which has always looked more like something from a cheesy high school production to me ever since I saw Dave McKean's trailer for Mirrormask at a Comic-Con that had title cards that said something like, "A land not beyond your imagination, because we think you're pretty smart."

Anyway, then Gilliam walked out on stage and found chocolate;

Here, again, is the clip I posted last week;

Following this, Gilliam brought out Verne Troyer, the only Imaginarium cast member who appeared, and began taking questions.

I was surprised Johnny Depp didn't stay for the Imaginarium panel, since he was there for Tim Burton's Alice in Wonderland panel, which I missed. Though I did see Depp drive by while I was in line for Hall H. He waved at people.

I'd gotten up at 7am on Thursday in the hopes of catching all the Hall H panels, but by the time I got in line for Hall H, the line looked like this;

Of course, this was mainly due to hordes of Twilight fans who'd stayed the night. People were handing out this; 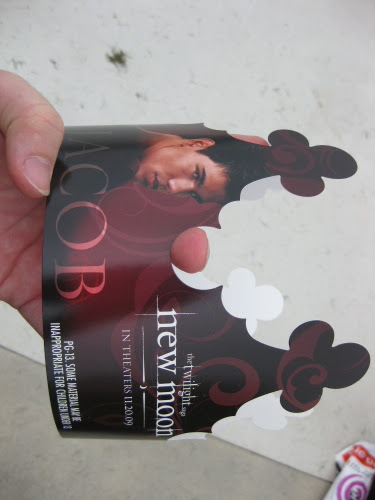 A Burger King/Twilight cross promotion and I have to say I couldn't think of a more perfect match.

There was certainly a significant new element to the Comic-Con populace this year--I eventually did get into Hall H because when the Twilight panel ended there was an exodus from the room of women and girls with bad perms and ill fitting purple and pink clothes.

While I do hate Twilight, there was a backlash against the Twilight fans I couldn't quite get with--I saw on Sunday guys carrying around signs that read "Scream if Twilight ruined Comic-Con". I saw a video of Kevin Smith talking about it the other day that I thought provided some very useful perspective, saying basically that a lot of the things the guys at the Con were devoted to weren't really artistically superior to Twilight, and that Twilight brought girls to Con, which is something the guys really shouldn't complain about.

And it seems to me there was indeed an element of "no-girls allowed" to the guys bitching about the Twilight fans. There's really no other reason Twilight should be the target of more gripes than Naruto and other incredibly lame corners of the science fiction and fantasy world.

On the other hand, I met a nice girl named Jamie in line for Hall H who was drawing a picture of Bellatrix Lestrange from Harry Potter murdering Bella from Twilight in order to reclaim the name "Bella", since apparently this is what Bellatrix was often called for short. Jamie was actually dressed as Bellatrix as well, and I told her to "say something only Bellatrix would say" when I took this footage of her;

Ninety percent of the cosplayers I took pictures of at Comic-Con were girls. You may call me a pig, and I'll readily admit I am a pig, but even if I weren't, I still think I'd mostly have been photographing the girls because they simply had, by and large, the nicer costumes. Maybe the guys just couldn't work up the enthusiasm knowing that, inevitably, they'd still be guys at the end of it--never underestimate the self-loathing of the male geek, particularly male otaku.

The first cosplayer I got a picture of was this 5th Element character with cool hips; 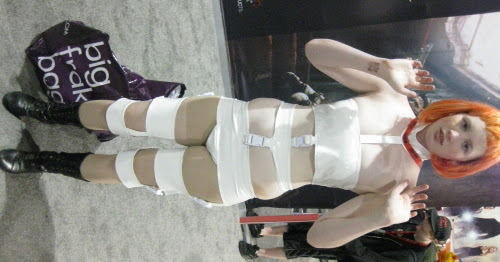 This was on the main floor of the Con after I'd given up on seeing the Alice in Wonderland panel and decided to just wander the floor. I'm not sure who these people were, but I liked them.

A mannequin cosplays as Asuka from Evangelion. 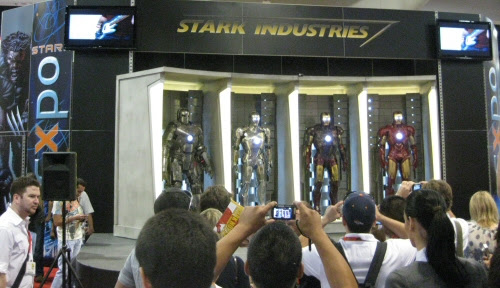 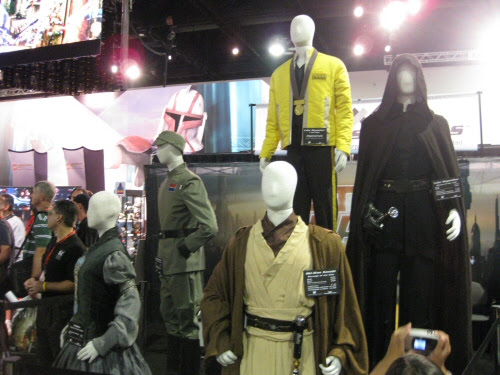 Some really amazing Star Wars costumes--the textures were perfect, down to the oddly rough linen quality of Luke's cloak. 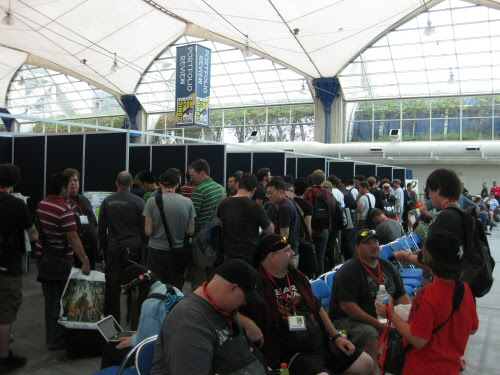 The portfolio review area, which I wisely avoided this year. 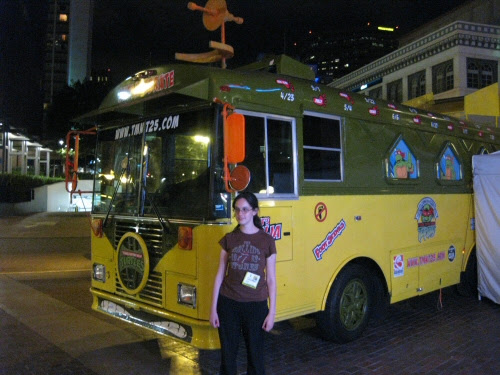 Cryptess and The Party Wagon. She'd been hanging out with Peter S. Beagle on Thursday.

I wanted to show her the wonderful Mexican restaurant, Pokez, where I most often eat during Comic-Con, but for once it was too busy that night.

I hadn't eaten lunch there, either, that day, instead choosing to eat at a Greek restaurant where I overheard a young man telling the cashier that Morgan Spurlock was currently casting "The Simpsons on Ice", though he cautioned that he really shouldn't be talking about it. He asked her if she was interested in auditioning, sounding totally serious, and she demured with complete sincerity. It was one of the most flagrant moments of unchecked bullshit I'd ever seen. Though I can kind of imagine Morgan Spurlock making a movie about duping people into auditioning for a Simpsons ice show--from what I've heard about his last film, he just might be that creatively bankrupt.

I shall forever honour Chewbacca.
Nabeshin is a rare and worthy man.
Gizmo by this time might well be caca.
There are hungry ghosts of goats in Japan.
Posted by Setsuled at 3:49 PM
Email ThisBlogThis!Share to TwitterShare to FacebookShare to Pinterest