No trash can is ever truly empty.
Tall spiders supervise waste disposal.
They have me take outside bags from my tea.
Cat pace cars monitor the proposal.

Even less sleep to-day than yesterday. Lots of noises around the house starting at the crack of dawn, which would be about an hour after I fell asleep. So I drew half a page, but I think I'll save the rest for to-morrow, maybe walk to Tim's to-night, then try to get to sleep early.

New Haruhi Suzumiya this morning--still in the time loop plot. Of course, the interesting thing is looking for the differences in each episode, one of the biggest being the different animation studios employed for each episode--it's an illuminating look at how different studios work, and I have a suspicion each studio was instructed not to look at the others' work; 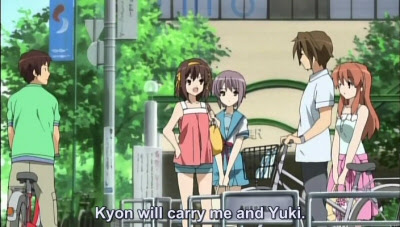 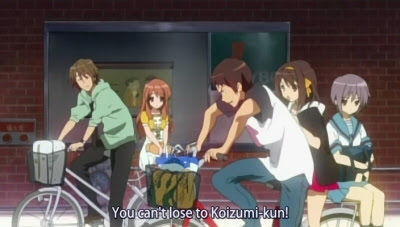 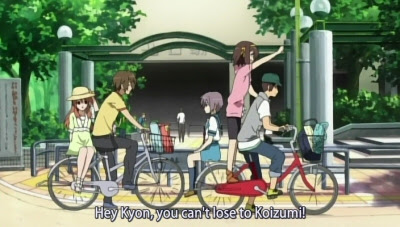 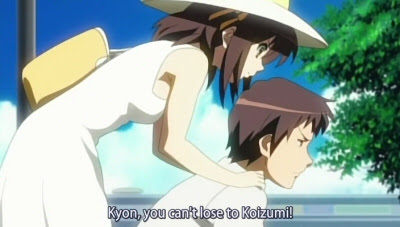 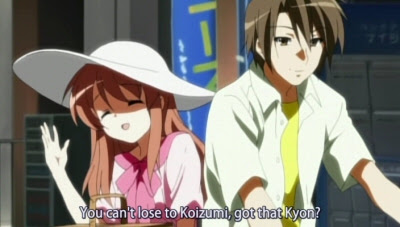 It adds to the eeriness of the story arc, the feeling that everything's the same but not quite. This latest one focused more on Koizumi for some reason--not giving him any more lines of dialogue, or even fundamentally changing his reactions to things. He just has more animation, his clothes stand out a bit more. It's an interesting exploration of camera created POV, too-Haruhi Suzumiya's a shounen series, so there's always going to be a lot of shots focusing on attractive female bodies, but, I think it was the second episode in the cycle ramped that it up slightly. Another episode played around with high contrast lighting a bit more. This newest one goes from an overt dread in the previous episode to seemingly making the characters comfortable with this dread. It's strong and disturbing deja vu for the characters, but they seem to have somehow become comfortable with it.

And, of course, each time one looks for clues as to how Kyon is supposed to finally break the cycle. There's some suggestion that he needs to express affection for Haruhi, maybe ask her on a date. But my prediction is that Kyon simply needs to do his summer homework--every episode ends with Kyon figuring he'll just avoid the schoolwork since he's stuck in a time loop anyway. I'm kind of hoping I'm wrong with this prediction. But I love the whole atmosphere of inertia, anyway.

And it's produced the only anime fan vids I can remember liking;


Posted by Setsuled at 7:16 PM
Email ThisBlogThis!Share to TwitterShare to FacebookShare to Pinterest