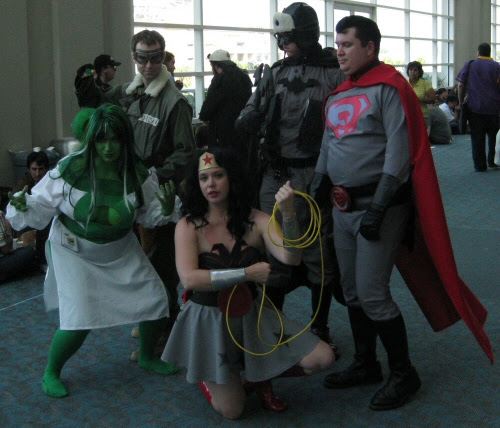 I'm normally pretty anti-social at Comic-Con, but for some reason, this year, I kept wanting to talk to people and people kept wanting to talk to me. A couple kids approached me in the anime hallway on Saturday to ask me where the 11:45am Ben10 panel was. I brought out my schedule but, as it was already 11:30, I told them, "You're not going to get in. With any popular panel, you have get there at least one panel beforehand and sit through it."

"But it's not that popular," said one of them.

"Ben10?" I said, a little more sarcastically than I meant to.

"Yeah, I guess you're right," she said and sounded pleased. And I realised that I, as an anonymous adult, had just validated her love for Ben10. For once, my reflexive sarcasm actually accomplished something good.

Shortly after this, I took my first cosplay photos of the day, a couple Final Fantasy characters; 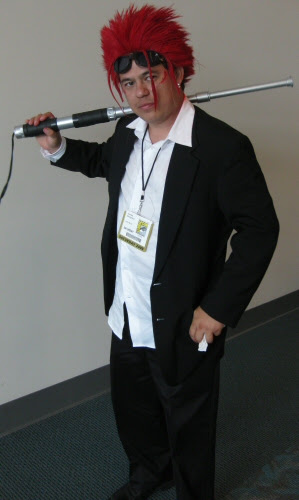 I saw a lot of Rikkus this year. Last year there had been a lot of Yunas, which I guess means next year is Paine.

I was sorry again to have missed the Alice in Wonderland panel when I saw these two; 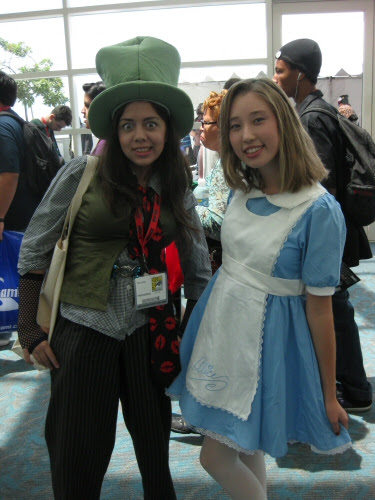 I admired the Hatter's attitude.

I decided to get some lunch, then, and it was on the way back from eating that I saw Linda, the Fiddler. Back inside the convention centre, I ran into this lady with a marvellous costume; 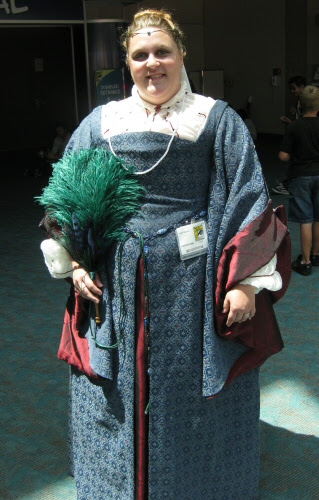 The textures, the patterns--everything about it was well above average. I asked her if she was dressed as any particular character. "Fifteenth century Portuguese," was all she said.

"Cool," I said, "I've been more into thirteenth century myself lately. " She tipped me off about the duelling happening on the mezzanine;

A lot of Star Wars people were hanging out on the mezzanine for some reason, too, and I decided I had to get at least one picture of the many very impressive Boba Fetts roaming the con. 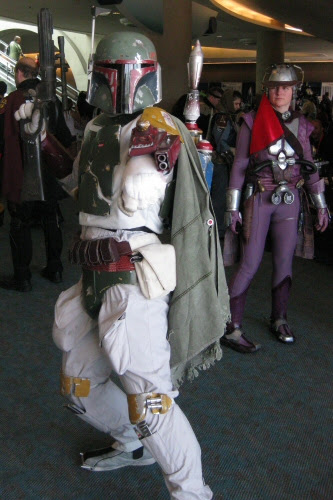 I didn't notice the really jealous looking Zam Wesall back there when I was taking the picture. "Lucas promised I'd be the next big thing in intergalactic bounty hunting, but people're still swooning over fucking Boba Fett. Why's he so special?"

I went to see Ray Bradbury's panel that night. It began with Bradbury's friend Arnold Kunert talking about several Bradbury related posters and t-shirts they had at their booth, and Bradbury complained about a tape he'd brought with him that was supposed to play before the panel started but there'd been a technical foul-up. It turned out to be footage of Bradbury being interviewed by Mike Wallace after the Apollo-11 moon landing, and Bradbury in the footage talked about how space exploration would mean the end of war as it would provide another expression of masculinity--he said boys loved war because it was fun, though it's generally not talked about, and he indicated that space travel would be something that united men with something to replace the fun of war. The interview, of course, was quite old and well before Margaret Thatcher and Ann Coulter came on the scene, though Bradbury didn't say whether he'd amended his opinion on the inherently masculine nature of war.

Here Bradbury discusses his inspiration for The Illustrated Man;

Here's Bradbury on burning the internet and being buried on Mars;

Finally, Bradbury takes that perennial question; what advice would he give to young writers?

As I was on my way out, I got a photo of Silk Spectre, who was in attendance;

There were many Silk Spectres and Rorschachs this year. 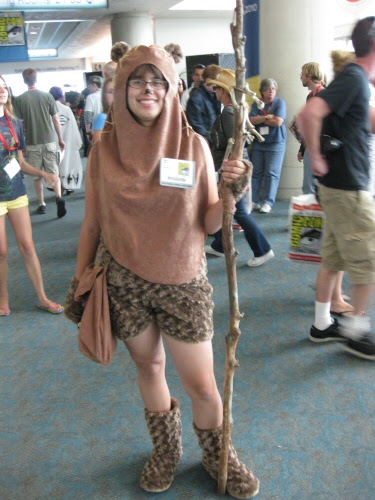 A human/Ewok hybrid. There's a scene I'm reluctant to imagine.

I went the autograph area next, where a lot of fairly big stars had drawn surprisingly small crowds. Here's a lonely Kevin Sorbo; 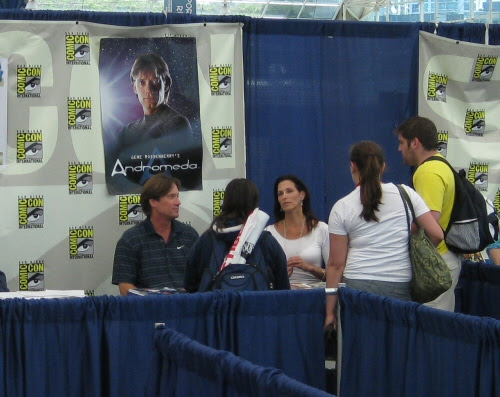 And then I came across Virginia Hey, known to me as Pa'u Zotoh Zhaan from Farscape, and getting a chance to talk to her more than made up for missing the Farscape Anniversary panel. 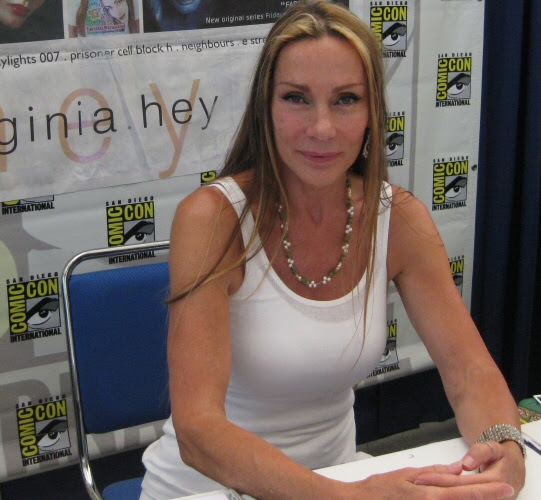 As I approached, she was talking to someone about makeup artists in Australia and how her extraordinary eye for symmetry had often led to her assisting her makeup artist on Farscape.

I asked if I could take her picture, and told her I was planning on posting it on my blog. I gave her one of my Venia's Travels cards, which features the gold title with one of the rose drawings from the main page in the background, and Hey seemed very pleased to see the rose, bringing out her iPhone to show me her rose wallpaper. We talked a bit about the variety of roses out there, and I recommended to her the anime series Revolutionary Girl Utena, which features a great deal of rose imagery. 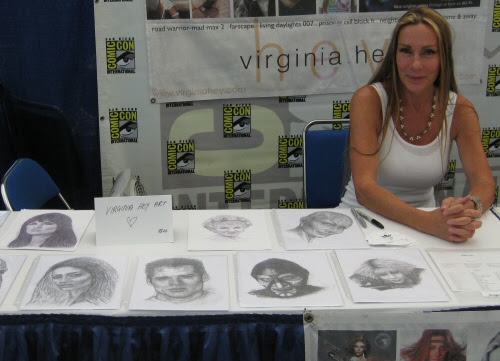 Hey was displaying several of her pencil drawings, which seemed generally to be portraits of Farscape characters. It's nice to know she's truly passionate about the series, even now. And she seemed very keen on establishing real dialogue with the fans who approached her.

I went back to the anime hall to see if there was anything playing that interested me, but I didn't have much luck with anime showings this year. I did, however, run across Ranma Saotome;

And that about covers Saturday. More to-morrow . . . 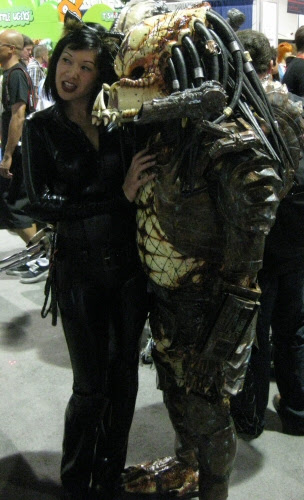 One can't gain favour with all centaur clans.
And there's just no pleasing the lycanthropes.
Endless snags plague all this chimera's plans.
Another party of masked misanthropes.

I've been playing World of Warcraft again the past couple nights after more than a week of absence. A wand I'd put on auction had sold for a hundred gold. Now I'm trying to kill centaurs from one clan to gain favour with their rivals, though I also have a quest to the kill the rival clan to gain favour with the one I'm killing. Not sure how it's going to work out. Anyway, it got me thinking about human animal hybrids last night. Probably ought to've mentioned the Ewok. Are Ewoks even really sentient? I say no.
Posted by Setsuled at 6:57 PM
Email ThisBlogThis!Share to TwitterShare to FacebookShare to Pinterest