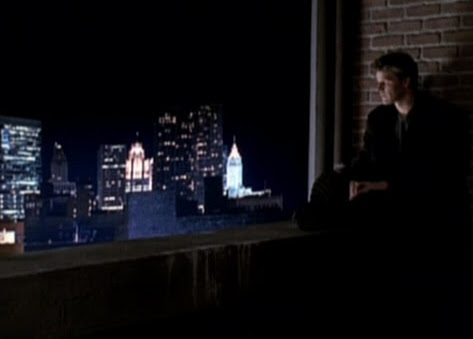 All is well in Angel's little fake city.

I'm up to the eleventh episode of Angel, and it's still basically superior to Buffy, mostly, I think, because it holds together better. It has a more consistent set of rules--there's no unspoken prohibition against the use of guns, is the main thing. And you get more of an impression of the general hell a world of killer demons would create.

The introduction of Wesley and the departure of Doyle creates a better dynamic for the lead characters, too, though I do like Doyle. Joss Whedon, in Doyle's Wikipedia entry, is quoted as saying, "He was a very popular character, but the mesh was very difficult in ways that made it hard to write. Glenn had a kind of intensity that was kind of like David [Boreanaz's], and David already has that." But, of course, the clear problem I think most people could see from those nine episodes was that Glenn Quinn had the intensity Boreanaz didn't have and never had. Both Buffy and Angel were notoriously plagued by bland leads, and it's never more apparent than in the Angel episode where Buffy guest stars and the episode hangs on a chemistry between the two actors that has less life than a desk's romance with gum. But it's easier to forget when Glenn Quinn's not around. It's a shame Quinn died without ever getting the lead role he seemed built for.

No trash can is ever truly empty.
Tall spiders supervise waste disposal.
They have me take outside bags from my tea.
Cat pace cars monitor the proposal.
Feline suits withhold sleep in a briefcase.
Someone's got to negotiate with them.
My lack of REM is infecting the base.
Let Keith David or Wilford Brimley in.
Cops won't find the alien on the streets.
It's found in the heart of Saturday night.
It's safe on set to love in city tweets.
With David Tomlinson we fly a kite.
The safest moé's Jessica Rabbit.
But The Shadow knows your darker habit.

I listened to David Bowie's Diamond Dogs walking back from Tim's last night. It's a good idea to get in touch with David Bowie now and then. I ended up listening to The Bell Jar audiobook while colouring--I got to the part where Esther and Betsy are seeing a movie, right before they get sick, and Esther talks about how it became clear that the nice girl in the movie was going to end up with the nice guy and the sexy girl wasn't going to end up with anybody. I always thought this was funny, and kind of a comment on American society's disapproval for women who enjoyed sex. Of course, it also mirrors Esther's relationship with Buddy, who she begins to hate after she finds out he's by no means a virgin, even though he'd made her feel as though she were the "sexy" one in their relationship.

Last night, though, I got to thinking about what the filmmakers' intentions were with the movie Esther was watching. Is the idea to condemn girls for being sexy, or to comfort girls who don't believe they could ever be sexy? I suppose it all depends on perspective. Though even if the latter were the case, the suggestion would still be that women should be punished for a certain amount of sexual expressiveness. Of course, the real point of the movie may have been the importance of regulating nuclear power, for all I know. I don't know what movie she was watching, and people will often see the story they need, want, or are compelled to see in what they're watching.
Posted by Setsuled at 10:07 PM
Email ThisBlogThis!Share to TwitterShare to FacebookShare to Pinterest