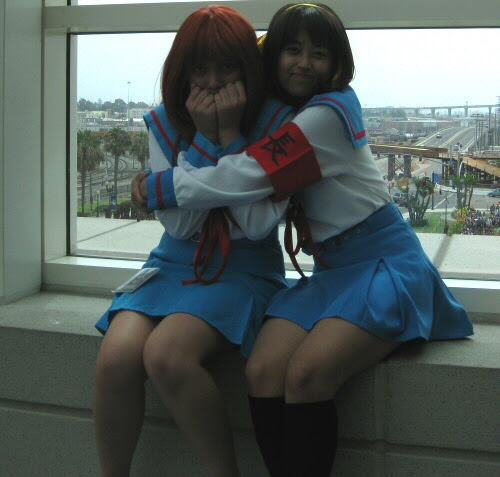 That's a Mikuru Asahina and a Haruhi Suzumiya. I saw a lot of Haruhi Suzumiya cosplay, including a big group outside the convention centre inviting people to join the S.O.S. Brigade--but they were hired to be there and you can always tell the difference between the people who dress up because they love something and the promotional people. At least, for me, the latter lack something.

I'd planned on either seeing the Farscape Anniversary panel or the Coraline panel on Friday morning, but I got to the Con too late to see either. So I got in line for the Comic Book Legal Defence Fund's panels, and it was in this line that I met a very nice girl named Lisa, who lives in Portland, Oregon and whose father is a comic book artist, a member of Portland's Periscope Studio. We talked about Comic-Con, radio dramas, and promoting oneself on the internet. Apparently she's friends with artist Steve Lieber, because he stopped to talk to her as he was walking past us.

The first of the two CBLDF panels I saw was "Master Sessions: Expressionistic Atmosphere with Mike Mignola." Mignola told us he wasn't sure if his work was more impressionistic or expressionistic (I'd say expressionistic), but he did say that one of his biggest influences growing up was Frank Frazetta. Mignola drew Hellboy on an overhead projector for us while he talked, and as he made big, angular black shapes for shading and shadows with a marker, he told us how Frazetta would often spot black and that this was something that rubbed off on him. He said he had to develop confidence to lose a lot of the details from his pencils, which, he said, he drew "like colouring books".

He said he even now didn't feel entirely comfortable drawing feet, that his characters often seem to be floating when he doesn't root them to the scenery with foreground objects or effects obscuring their feet. But he stressed the importance of learning to draw even the things you don't want to draw, and he mentioned a Wolverine comic he illustrated that featured several close-up panels on Wolverine removing his boots. Mignola said he took a lot of polaroids of his own foot.

It's a really good thing I befriended Lisa in line because she gave me sketch book paper, loaned me a pen, and was aggressive in getting us seats close to the front for the next CBLDF panel, which was life drawing of Amanda Palmer. 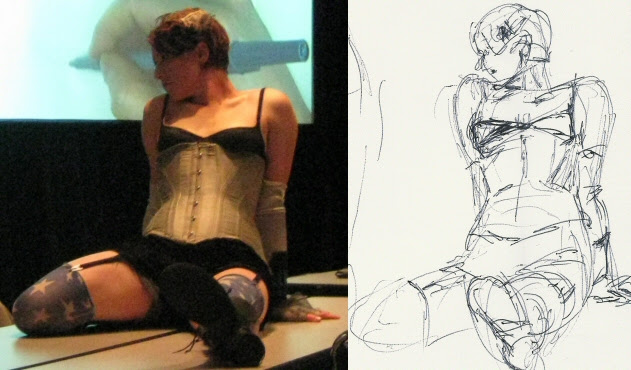 Artists Camilla D'Errico, David Mack, and Terry Moore were on the panel, and their drawings of Palmer were on the projector, but as you can see I was among a group of people quite close enough to draw Palmer, too. Changing clothes right in front of us, Palmer even had Lisa tie her wrist warmers.

Lisa didn't have an extra pencil to lend me, so I just did gesture drawings; 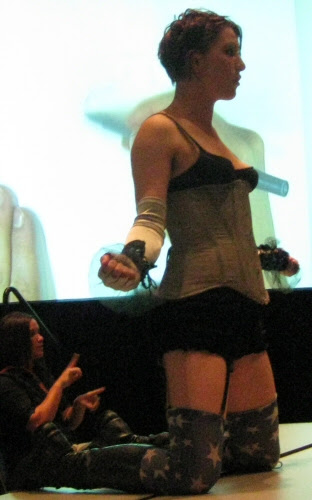 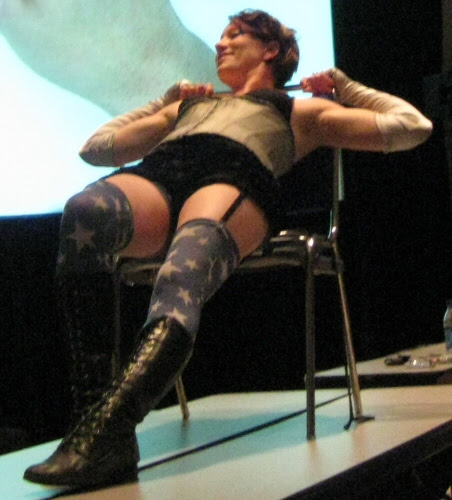 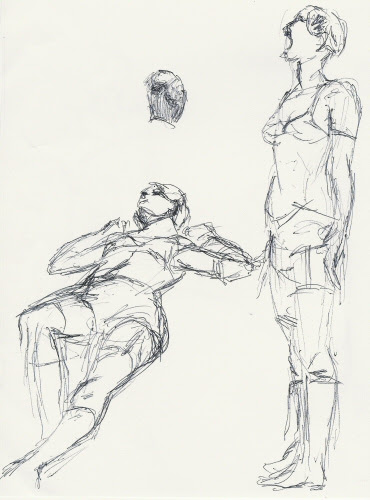 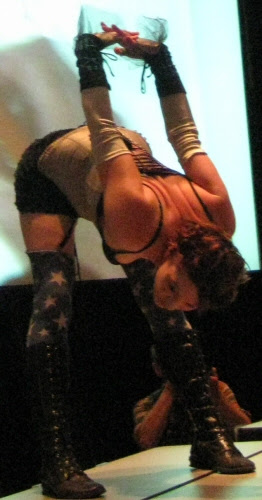 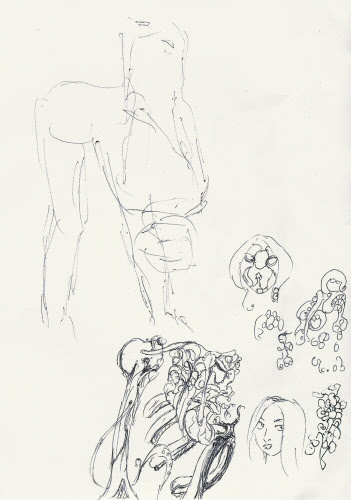 Some doodles in the lower right hand corner from when we were waiting for Palmer to appear. Lisa asked me to draw the main character of my comic, but I somehow wasn't quite sure how to begin Venia with pen.

The panel artists talked about the importance of learning to draw real people for comics--even D'Errico, who described her style as manga and having little to do with realism. She mentioned how little her art teachers encouraged her, and it was to me another example of the general disdain towards the manga style in the western art community--I constantly hear about how manga styles are discouraged.

Well, after this panel, I was pretty much sated. It was only two o'clock, but I could've gone home perfectly satisfied with the day. Instead, I went downstairs and roamed the main floor a while, where I came upon some amazing movie props on display. 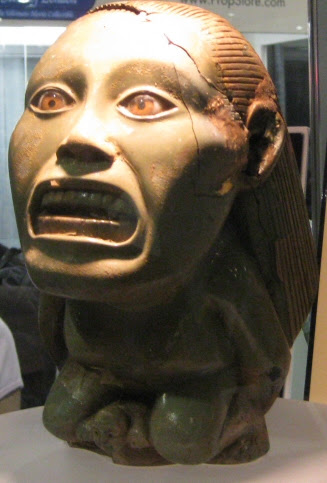 I can only imagine the security precautions around this thing. 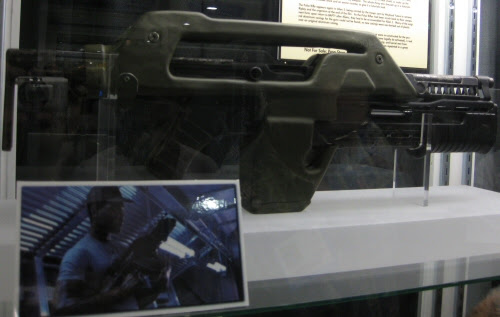 How I long for the James Cameron of old. 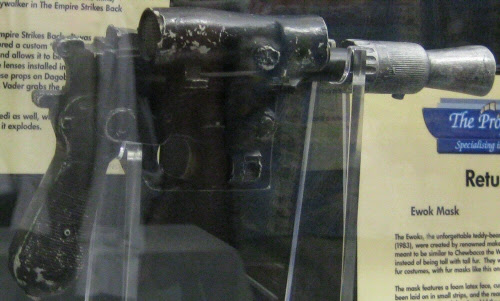 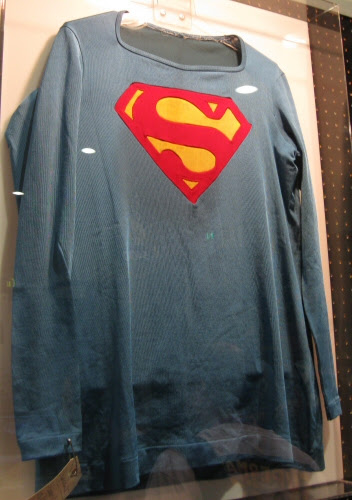 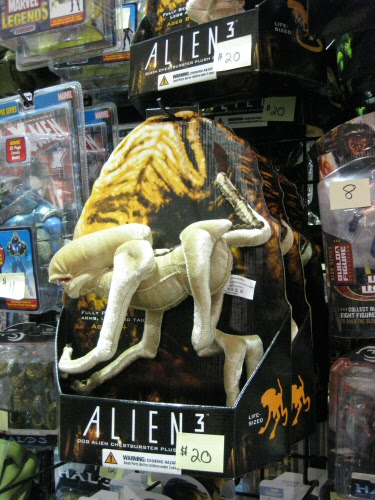 This plush chest burster is not a prop that was used in Alien 3, I repeat, this is not an actual prop. Just so we're clear.

However, this really is the Bat Pod seen in The Dark Knight; 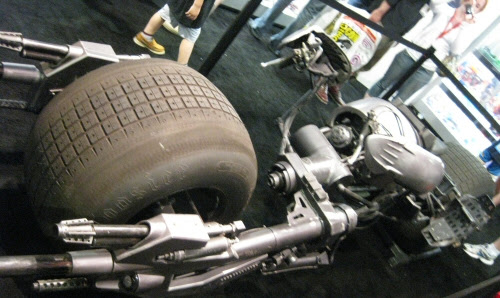 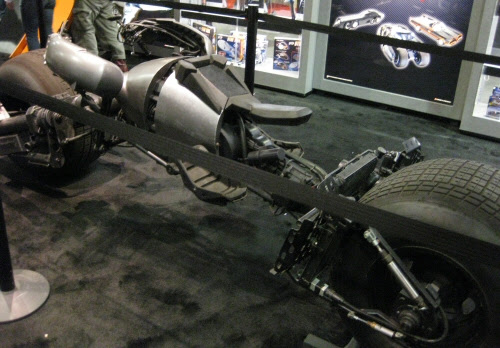 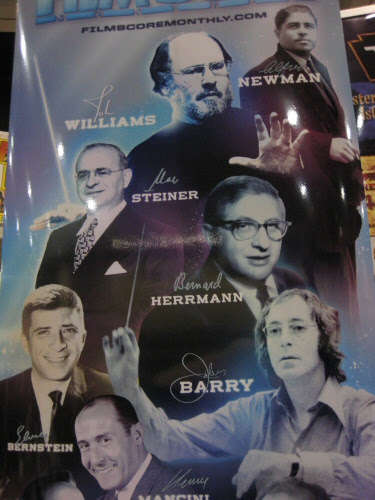 As a movie soundtrack fan, I couldn't help getting a kick out of this poster. 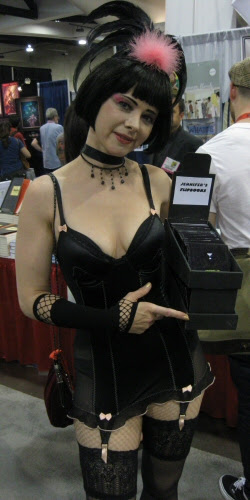 I asked this lady if I could take her picture, and she immediately afterwards demonstrated to me a flipbook that showed her taking all her clothes off. And it occurred to me this must be what heaven's like. This is her web site. 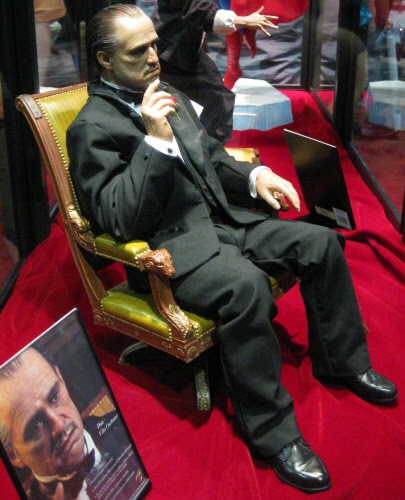 Looks like Don Corleone's tailor made him an offer he couldn't refuse.

As I was wandering, I ran into Gene Simmons with a big camera crew and press. I'm not particularly into Kiss (though I have nothing against Kiss), but I kind of felt like I couldn't not take footage; 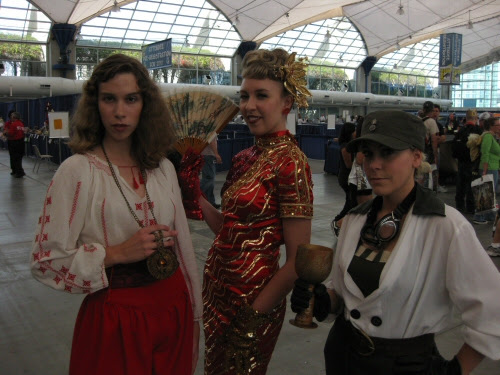 Indy's ladies. I loved the idea.

That night I saw the live Rifftrax performance by Mike Nelson, Bill Corbett, and Kevin Murphy, which was hilarious as usual. They riffed a construction safety video from the late 1970s with music and narration my Waylon Jennings called "Shaking Hands with Danger". They also opened the floor to suggestions for a movie to riff, and the winner ended up being Dragon War, which sounds ideal, though the crowd had actually sounded more enthusiastic about The Super Mario Brothers movie. Which would have gotten my vote. I can still dream . . .

That about covers Friday. More to-morrow . . .

Many heroes are now on the trapeze.
Many places around town are a sith's.
Ate again at the amazing Pokez.
And my waiter sang along with The Smiths.
I shall forever honour Chewbacca.
Nabeshin is a rare and worthy man.
Gizmo by this time might well be caca.
There are hungry ghosts of goats in Japan.
No cure for sober like Wild Turkey.
Unions aren't destroying Subway Sandwich.
Don't give bourbon or mayo to Trumpy.
He's too powerful a tiny sasquatch.
Morning's been pressed into a new sector.
And focus is captive to night's spectre.


Posted by Setsuled at 2:41 PM
Email ThisBlogThis!Share to TwitterShare to FacebookShare to Pinterest