One can't gain favour with all centaur clans.
And there's just no pleasing the lycanthropes.
Endless snags plague all this chimera's plans.
Another party of masked misanthropes.
One cannot collect too many shellfish.
But some would impose a limit on gin.
Olives are a quite adequate garnish.
Vermouth's not something you have to put in.
Leaders may unite men against grey geese.
The eight reindeer were always on the roof.
Please tell Obama beer doesn't make peace.
You must drink something at least eighty proof.
They'll stone you when you try to get the phone.
All our operators are made of stone.

After writing about Comic-Con for days, there's naturally a backlog of spider pictures to post. In the garage a couple nights ago, I was about to turn off the light when I saw this fellow lying in wait; 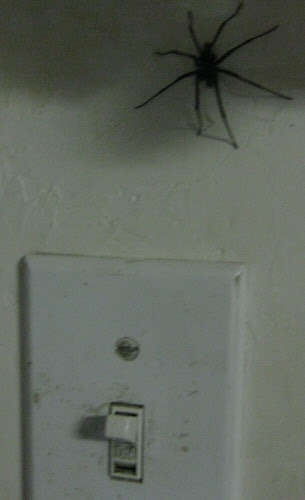 That's the second brown recluse I've seen here this week, the first having been by the front door; 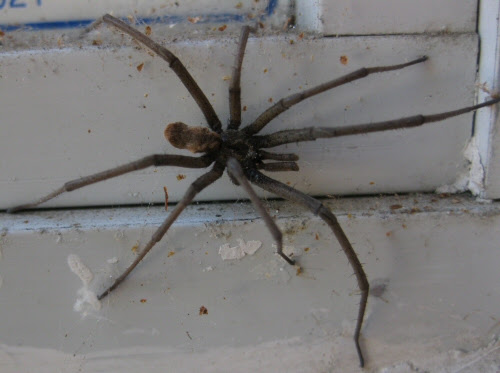 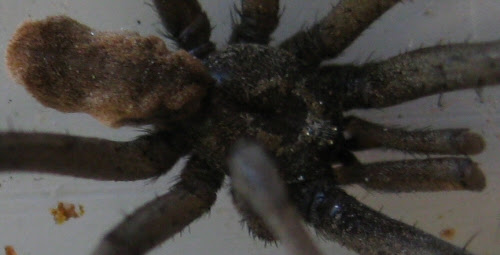 I guess word must really be getting around about me on spider forums.

I watched the new Haruhi Suzumiya and read the new Sirenia Digest this morning with breakfast. The latter contained first a nicely sexual sun/moon myth story that seemed somehow South American to me. And the Digest also contained an intriguing account by a fictional character of his encounter with a painter. It would seem to be another in Caitlin's "observer of an artist" motif. One might speculate there's something narcissistic about them, but they work perfectly fine. This one also features a somehow sinister narrator. And it connects with Caitlin's upcoming novel, The Red Tree.

I did not sleep too well last night. I got up to use the bathroom and Snow was hanging out outside, looking for attention. I can't say no to a cat. I woke up at 11am to-day--I have a feeling I'm going to be back to my nocturnal schedule pretty soon, whether I like it or not. I've finished the first couple pages of the next Venia's Travels at around 10pm the past couple nights, which feels insanely early, which has led to me tricking myself into thinking I can play World of Warcraft for an hour each night. No ill effects so far, though.

I finally got my car registration in the mail to-day, after paying for it more than a month ago, and after the previous registration expired around three weeks ago. Thank you, DMV. It's lucky I planned on taking the trolley to Comic-Con anyway. Now maybe I'll just go for a drive to-day . . .
Posted by Setsuled at 3:38 PM
Email ThisBlogThis!Share to TwitterShare to FacebookShare to Pinterest