Thirteen minutes are similar to ten.
Fireworks never end when you expect.
The new shogun prefers women to men.
All peaceful plans to sack Edo are wrecked.
Tomato sauce has taken the whole plate.
A cat might make a mess of a lizard.
For some spoils mercs will forever wait.
Lazy monks attend them in a blizzard.
There's barely time now for Technicolour.
The angry black cat sleeps in seclusion.
Matters of gross human height are solar.
Brought to a not jolly green conclusion.
The checkout is not your home or your bank.
The world's big with better places to think.

Finally catching up on a lot of things to-day I've been behind on lately, most importantly colouring. It's still going to be rough getting ahead for Comic-Con, though. 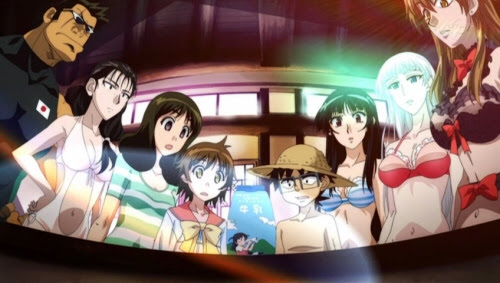 With breakfast to-day, I watched the final episode of Natsu no Arashi, which was one of the most gloriously self indulgent works of art I've ever seen. Filled with completely inexplicable and unabashed fanservice. Every few moments, all the characters abruptly changed into different, skimpy costumes for no reason at all, and the dialogue was composed entirely of riffs from two previous time travel comedy episodes, the best bit being a discussion of whether or not a carton of milk would still be expired if taken back in time to before its expiration date and swapped with its past, unexpired version and brought back to the future. The characters present different possible solutions to the paradox while wearing increasingly smaller and stranger clothes.

I think the last conclusion was that the milk existed but only Schrodinger's cat could drink it. Or something. 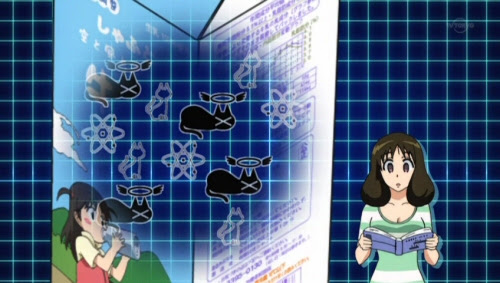 The time travel comedy was one of the best aspects of the series, which switched between comedy and a drama where a boy and the ghost of a high school girl travel back to the 1940s to rescue people from bombing raids. Interestingly, the show demonstrates repeatedly that the past cannot be changed, and that everything the characters do in the past had already happened, all the people they save had already been saved and remembered being saved by them. In one case, a man informs the characters that they saved him before they go back and save him. I found this a fascinating deviation from standard time travel story telling, though I suppose it might have dissolved tension for a lot of people.

The comedy episodes supported the idea of inalterable history as well, with Hajime, the 13 year-old main character, convincing Sayoko, the ghost girl, to go back in time for his petty schemes, the fruits of which it inevitably turns out he's already experienced. And then there's a great sex comedy subplot about Hajime's co-worker, Jun, who's a girl posing as a boy, though eventually it's only Hajime who is fooled and some nice comedy is produced by the absurd lengths to which Hajime's stupidity goes to prevent him from realising Jun's true sex, even to the point where the two switch bodies and Hajime is so caught up in distress over the absence of testicles on Jun's body that he evidently fails to notice the vagina.

The drama aspects of the show were good, and kind of jived well with all the Japanese movies from the era I've been watching lately, but, if there is another season, I hope it concentrates more on the comedy. Maybe I ought to get the manga . . .
Posted by Setsuled at 9:51 PM
Email ThisBlogThis!Share to TwitterShare to FacebookShare to Pinterest