All the animals come out at Comic-Con. Pirates, droids, archaeologists. Sick. Venal. One day a real rain'll come and wash the scum off the streets.

Normally not much happens on Sunday, and indeed I didn't visit a single panel that day. I wandered the floor, where I spotted Nabeshin; 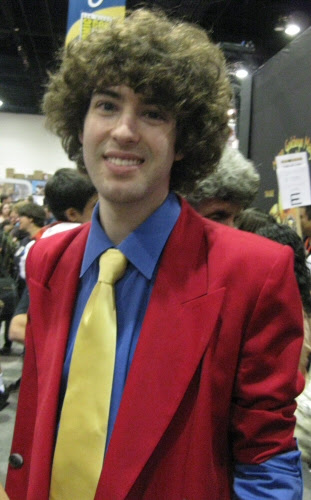 Shortly afterwards, I came across Peter Mayhew looking very glum. He was alone in his booth, no one was talking to him. He managed a smile when I took his picture; 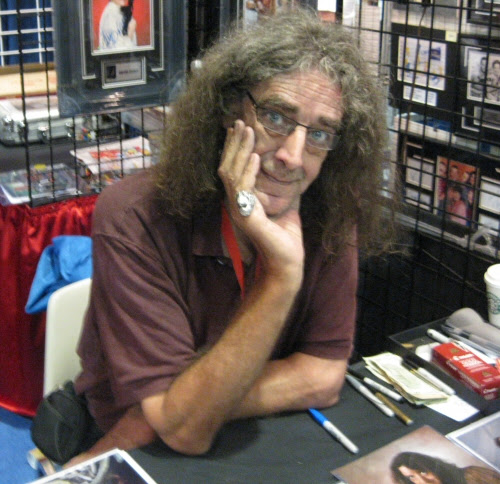 But, jeez, he's Chewbacca. I should have to fight through a mob to get a picture of him. What happened? I'd been listening to Howard Stern on my iPod on the trolley trip to and from the Con and he'd been talking about a guy he knew who'd been a big fish at his old radio station but was lately reduced to working at his old college station. What a crap shoot is the entertainment industry, and a sense of self worth makes up the stakes more than anyone wants to admit.

But I also ran into Jaime Hernandez, who didn't seem too glum at the lack of attention he was receiving; 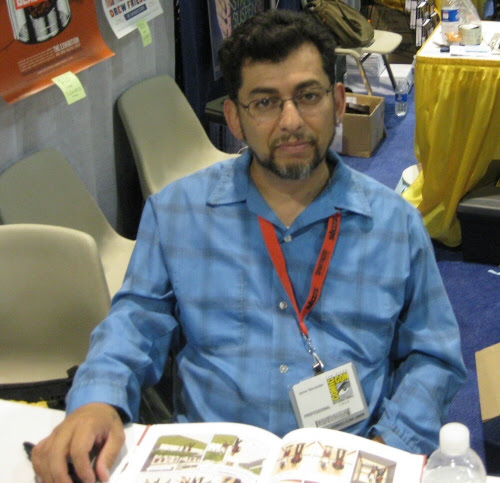 I could've stopped and talked to him a while, but I couldn't think of anything to say.

Upstairs, the civil duelling from the day before had disintegrated into all out melee;

I smelled a lot more pot this year than at previous Comic-Cons. Maybe that explains the atmosphere in the anime hall, though the people there seemed more like they were experiencing a sugar high.

All four days, there'd been two bunny girls carrying around "Free Hugs" signs in the anime hall. The Free Hugs people have been getting to be a bigger presence every year. Having two girls dressed in Playboy style bunny outfits brought a sexual aspect to it I'm not sure all participants were comfortable with.

Then again, this line of free huggers;

Later turned into a pelvis thrust conga line which I failed to get footage of. I'm not sure how many of the girls in the anime hall are wearing sexy clothes because they like to titillate or have been conditioned to see the getups as more innocent. They generally seem like good hearted folk, in any case. I think they touched even the heart of this lurking, dedicated parent; 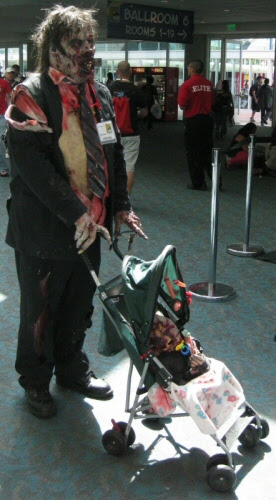 That about concludes all I have to say about Comic-Con 2009. This is the first time I've managed to get through all of it with only four posts--having a camera makes a big difference.

I hung out with Cryptess again that night and I drew a bunch of Wircelias in her new sketch book. In return, she drew her own version of Wircelia, which I rather liked; 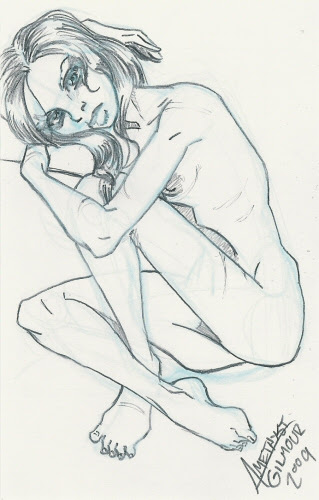 One cannot collect too many shellfish.
But some would impose a limit on gin.
Olives are a quite adequate garnish.
Vermouth's not something you have to put in.
Posted by Setsuled at 7:11 PM
Email ThisBlogThis!Share to TwitterShare to FacebookShare to Pinterest