I am a Rogue Tetris Block 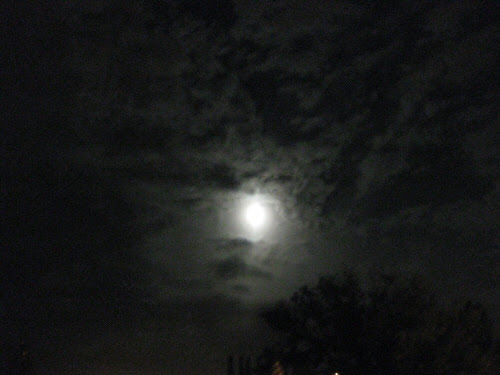 A picture of the moon I took as I was walking home from Tim's house on Friday.

The day's already lain its plans for you.
Calmly and quietly without complaint.
So quit trying to decide what to do.
The house is built, all you decide is paint.

The Comic-Con's programming schedule's now its web site, and it looks like I'll be spending practically all day in Hall H on the 23rd, the first official day of the Con. I'd camp a spot in the room just for Terry Gilliam, but I'm certainly interested in seeing Tim Burton discuss Alice in Wonderland--though, in terms of articulate directors, Gilliam and Burton are kind of at opposite ends of the spectrum, Gilliam being extraordinarily articulate, while Burton usually seems like he wishes someone would cut his tongue out to remove the pressure. I'd certainly like to see what James Cameron has to show, too. Looks like I'll have to sit through the Twilight panel, though. Maybe there'll be some teenage girls I can seduce with body glitter and blank stares.

It's interesting that practically all of the really big panels are on Thursday. Anyone hoping to get in to Hall H is going to need to get there early, too early really to pick up a pass first, which means everyone must get their passes on Wednesday, preview night, which you can only do if you bought the full, four day pass. So if you have to work on Wednesday, or you only bought a pass for Thursday, you're out of luck. On the one hand, I can see the rationale as it would encourage people to buy the four day pass, but the schedule's only just been released and the organisers must have known passes would be sold out long before this. Meanwhile, practically nothing's going on on Saturday--well, nothing "big". I'll certainly want to see Ray Bradbury that day. It's with some pleasure I see that, after years of headliner treatment, Zack Snyder and his Watchmen pastiche have been relegated to sharing a panel with Mark Hamill and Kevin Conroy upstairs on Saturday night in Room6BCF. I like Hamill and Conroy, but nonetheless--HAHAHAHAHA! YOU SUCK, SNYDER, YOU SUCK AND EVERYONE KNOWS NOW.

Otherwise, let's see . . . I'll want to see the live Rifftrax performance, I'll probably want to check out Joss Whedon and Eliza Dushku's Dollhouse panel (hopefully the fact that I'm one of five people who like the show will be reflected in crowd size), and I'm going to have a hard time choosing between seeing Henry Selick and Neil Gaiman on the Coraline panel or seeing Brian Henson, Rockne O'Bannon, Ben Browder, and Claudia Black on the Farscape anniversary panel. I'll probably definitely see Amanda Palmer's CBLDF live figure drawing something-or-other--it's nice knowing I'll be able to catch at least one AFP performance (of sorts) since I can't drive across town to see her and Gaiman perform at The Casbah. I've been to The Casbah, and it's a cosy little venue, making it all the more irritating that the show's happening during Comic-Con.

All in all, it's looking like a pretty good Comic-Con. Even Sunday looks worthwhile, with the American Dad panel. Maybe this is just an indicator of American Dad's tiny following. Patrick Stewart's the shit on that show, folks.

I feel like these past few days are probably the last where I won't be really busy as I work to get ahead on my comic before the Con, which has oddly been a lot of pressure. I ended up doing practically nothing yesterday, starting a bunch of things without finishing any. I finally gave up and started writing the script for chapter 30. I felt a lot better afterwards, and ended up watching Planet Terror and drinking tequila. It's such a shame Robert Rodriguez lost out on directing The Princess of Mars. Maybe he wouldn't have kept the nudity, either, but he'd probably be more likely to keep it than Andrew Stanton. As much as I do love WALL-E, the guy's just not the right fit for this material. But then again, we don't really live in a world that would accept an all nude, Sci-Fi blockbuster, do we? Which is all kinds of sad.

Here's some footage of Tim's cat, Charlie, I took on Friday night;

The music is Robert Schumann's "Traumerei" with lyrics supplied by Kafuka Fuura of Sayonara Zetsubo Sensei. I forgot to mention what a fantastic day Friday was for anime--both a new Haruhi Suzumiya and the season premiere of Sayonara Zetsubo Sensei had finally been subtitled. I was very happy to see the new stuff maintains the fantastic quality of the previous seasons.
Posted by Setsuled at 8:05 PM
Email ThisBlogThis!Share to TwitterShare to FacebookShare to Pinterest