Sometimes the MacGuffin is More Important than Killing Anything

All centaurs are more human than satyrs.
Neither of them ought to be sawed in half.
In dreams dwell the advocates for waiters.
Who are real humans in the final math.

I'm feeling peculiarly benevolent, so to-day I shall explain the tweets to you, supplicant reader.

The tweets reference Lenny Bruce's prediction that waiters shall be the final oppressed minority, Howard Stern's live shows when he had been fired from NBC and he practiced a gruesome variant of the "saw a lady in half" magic trick, and the first tweet refers to the fact that World of Warcraft classifies centaurs as humanoids but not satyrs. What this means is that Lelia, my undead warrior, can feed on the flesh of centaurs but not satyrs, which was inconvenient because it was satyrs I was battling in Ashenvale last night.

I actually got caught up with my comic last night, finishing the sixth page of the next chapter at around 12:30am, unexpectedly finding myself with an hour and a half of free time. It was extremely disconcerting--I played World of Warcraft while drinking gin, but felt a little ill at ease, keenly feeling like I shouldn't have gotten done all I'd gotten done. Maybe that's why I've been so productive to-day so far--I've already pencilled and inked the last two pages of Chapter 29. I've only a lot of colouring to do now.

Last night I also played with my level four human rogue a bit (this is her); 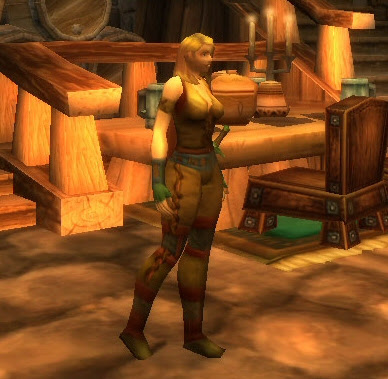 Nothing remarkable yet, but I'm proud of the name I snagged for her--Galatea. Though I suppose it would've made more sense for my undead character to be Galatea. Oh, well.