On the trolley after Comic-Con on Thursday night, I was telling Amee about the BBC series Being Human. I said it was a good show, especially when the ensemble is together. Unfortunately, when the characters are separated, the show tends sometimes to drift into some phoney angst.

A middle aged woman sitting next to me started laughing weirdly, sort of bitterly and I said, "Are you a fan of Being Human? I hope I didn't offend you."

She said being human, apparently the concept of being human and not realising that I was talking about a television series, was very interesting and she explained to us that it was important not to get too caught up in your own problems, to think about the troubles other people have in their lives. Her fiancé, she explained, had tried to murder her but that didn't mean other people didn't have worse problems.

She rambled on a bit repetitively about how she was a writer, and how it was good to observe people and their problems, and she talked more about people getting stuck inside themselves.

"Like a bell jar," I said, finally getting a word in edgewise. "As Sylvia Plath might say," I thought, maybe being a writer, she'd appreciate the reference.

"Right!" she said and rambled on, accidentally revealing at one point she thought I'd said "bell curve" and hadn't actually understood what I meant at all. In fact, the more time she spent holding forth on how it was important to consider other people's problems, the more impressively she seemed to be wrapped up in herself. She didn't seem to understand much of anything Amee and I tried to explain to her about Comic-Con or Being Human, and she spoke with a tone of casual authority like a talking head on a documentary. It all kind of fit in with something that absorbed me for most of Comic-Con, that at the Con were thousands of artists with dreams only about 0.01% have any chance of achieving. Many of them to some degree like the lady on the trolley, more caught up in their self image than in any process that might lead them where they want to go.

On Friday, I was to have two accidental encounters with the Being Human cast, first when the flow of the crowd kind of forced me past their signing booth.

And I wandered into their panel later in the evening, after I gave up waiting for the Rifftrax panel. I guess the fact that Being Human's not so well known in the States accounted for the fact that I was able to get into the panel well after it started. It was the question and answer segment when I sat down, and I was impressed by the easy and sort of giggly chemistry the actors seemed to have, particularly Russell Tovey and Lenora Crichlow. Tovey joked a bit about his frequent nudity, and Aidan Turner carefully fielded a question about his character's, Mitchell's, mopier storyline, rather fiercely defending it as being a credible form of co-dependency. Crichlow ended it by interjecting bluntly, "Men do that."

I was sorry to have missed the Rifftrax panel. I actually caught two panels in the same room beforehand, but I kept leaving the room, feeling curiously impatient, and figuring since I'd had such an easy time getting into the room, for some reason it wouldn't be as hard as it had been all the previous years I'd done it. Both panels I saw in the room featured J. Michael Straczynski talking about his work for DC.

In the later panel, Straczynski was joined by Jeff Lemire and Grant Morrison and the moderator (Matt Idelson, I think) brought up from the audience people cosplaying as Darkseid, Green Lantern, and Wonder Woman; 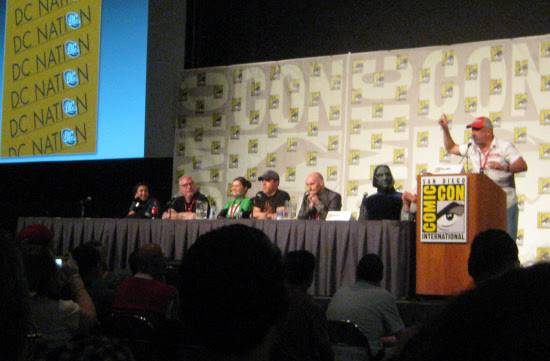 The Wonder Woman was dressed in the new almost plainclothes costume I'd gotten to thinking was universally reviled, as I saw quite a lot of old school Wonder Woman costumes at the Con. Idelson took an audience show of hands vote as to which costume everyone preferred that I think was skewed by the fact that no-one wanted to make the girl on stage feel bad. Straczynski, who's apparently responsible for the new costume, implored doubters to read the first two issues of his run, and he guaranteed he'd change our minds. I'm not sure about that, but I was happy to hear Straczynski say he was planning on incorporating more Greek mythology into Wonder Woman. 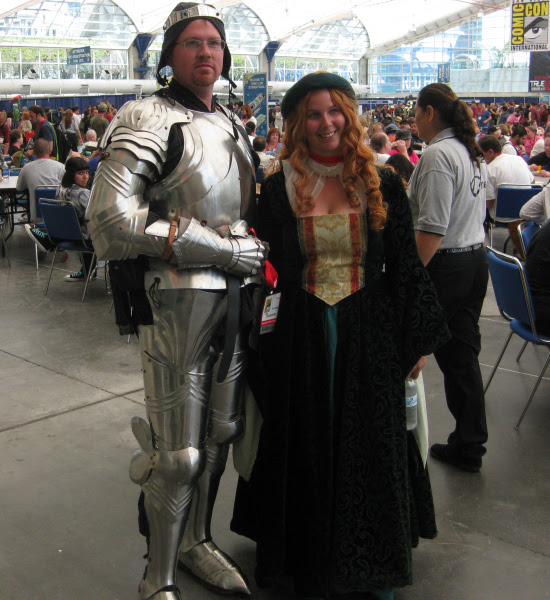 This guy in a rather impressive suit of plate mail that made clanking noises when he walked was quite a ways from the sort of Renaissance Fair ghetto terrace, where I recorded this duel; 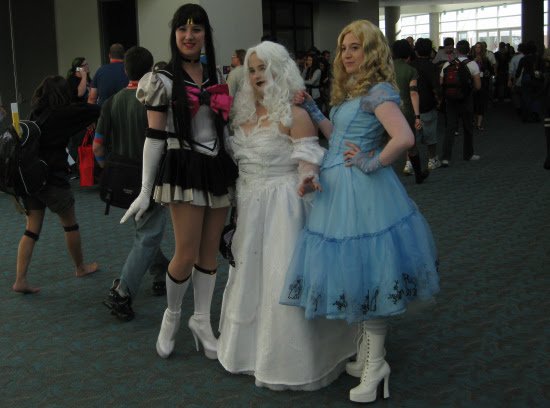 I saw a lot of nice costumes on Friday. Here a Lum from Urusei Yatsura poses with some Super Mario Brothers characters. 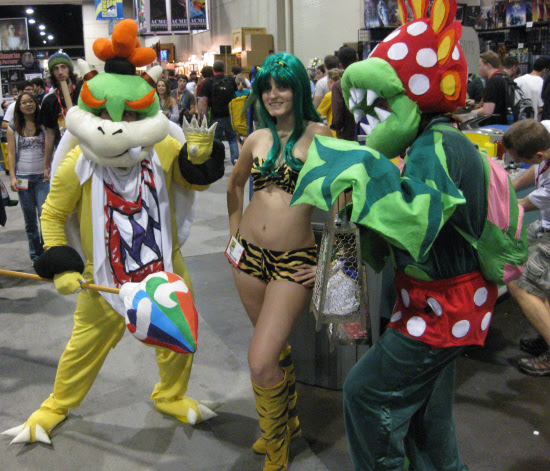 But the costume I know I'm going to be dreaming about is this Morrigan; 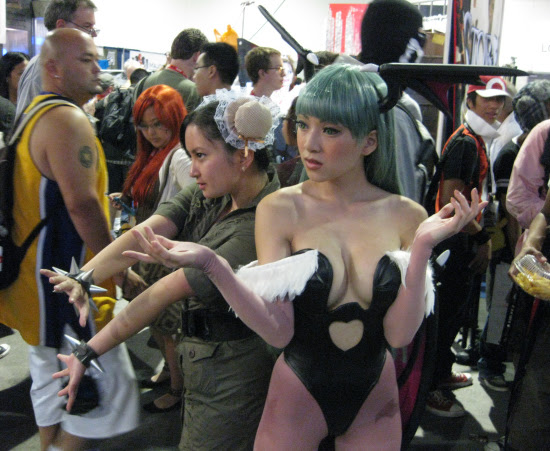 She was clearly extremely worried about coming out of her top, and somehow that was more exciting than the girls I've actually seen lose their tops at Comic-Con. 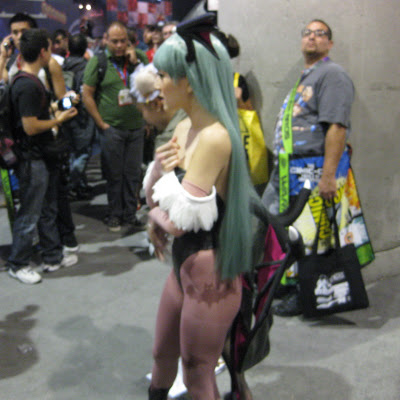