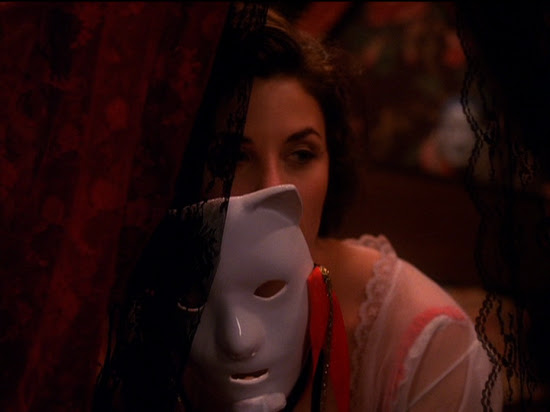 I stopped at the mall to-day for lunch, and as I was walking to the food court, an old woman intercepted me from my left and said something I couldn't make out.

"What did you say?" I asked and she repeated herself. Still I couldn't make it out, so I hesitantly repeated back to her what I thought she'd said; "'Jason's love goo?'"

She smiled and walked away. If I'd been younger, I'd have probably tried to think of a suitably blasphemous reply, like, "If that's the case, then why's he fucking someone else behind my back?"

But I don't quite hate people as much for trying to promote a reality where everything's going to be okay at the end. Last night, I was myself feeling pretty bleak about the likelihood of no benevolent higher power--I don't rule out any possibilities, so I could never be an atheist, really. But it doesn't look good. Roger Ebert posted this story last night about some kind of doomsday scenario wherein a giant methane bubble came from the BP oil spill. To-day, Ebert retweeted William Gibson's retweet of someone else saying the story sounded "crackpot", which didn't comfort me much as reading it, to me, was sort of like hearing that someone with a heart condition who didn't expect to live another year got hit in the head with a discus.

I was just sort of bogged down by the sense of inevitable doom last night, so I decided to watch something to lift my spirits. It occurred to me that David Lynch seems to believe in a spirit world, so maybe I'd feel better watching one of his movies. And I kind of did, if only because, as Agent Cooper put it, "It's not so bad, so long as you can keep the fear from your mind." 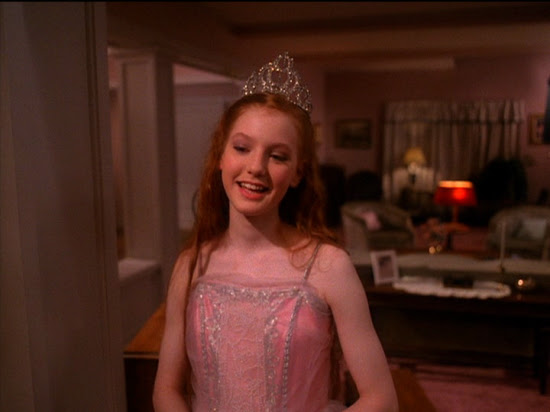 I watched the season premiere of Twin Peaks' second season, which I think may be my favourite episode of the series. The genius of David Lynch isn't that he comes up with such effectively strange things, but that he's good at showing the basic strangeness of human consciousness, and sees the value in it.

After the aggressively, big plot heavy season finale of the previous season--Dr. Jacobi ambushed by an unseen assailant! Bobby framing James! People getting shot quite dramatically! Agent Cooper getting shot!--the first scene of the Lynch directed episode has an extremely elderly hotel employee come across Agent Cooper bleeding on the ground, and just fails to recognise that he's been shot. 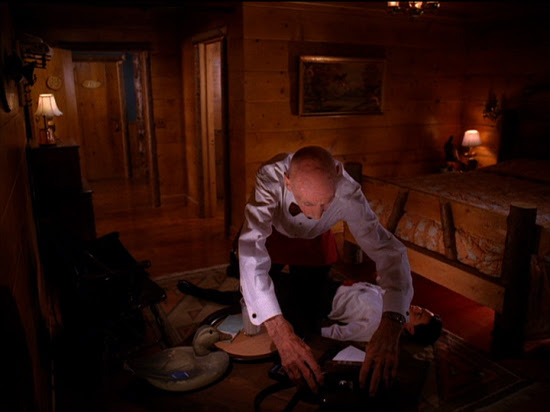 It doesn't seem totally implausible--we can see where the old man is coming from. He had his mission to fulfil, he had his basic sense of priorities firmly laid down. The genius of the scene isn't that it's so weird this old guy wouldn't notice Cooper had been shot, but that Lynch makes you believe this could really happen, that someone could really operate like this. 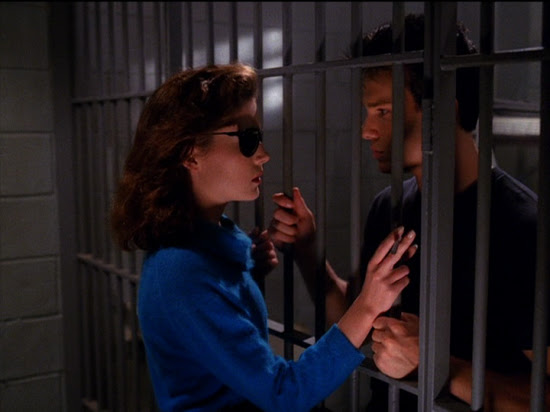 Similarly, Donna's sudden, if temporary, obsession with the drama of her situation has the aspect of irrepressible humanity growing around the edges of Plot. The scene where she meets with Maddy at the RR is one of my favourites of the series. 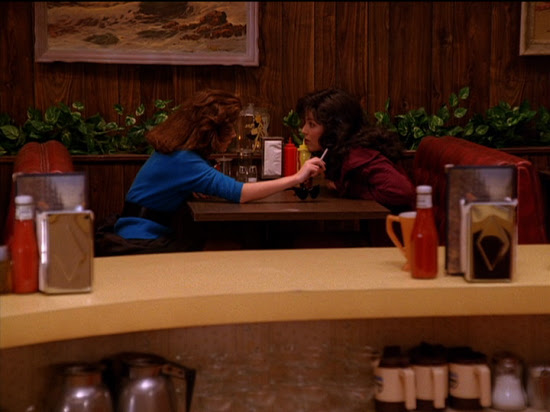 Maddy gives her a pair of Laura's sunglasses, and you can see the characters reacting to the solemnity of this action--it seems a bit morbid to take the dead girl's sunglasses, but obviously there's no sense in them going unused--but Badalamenti's cool music doesn't react, and maintains the same feel throughout the conversation, as Donna dips into play-femme fatale again, Maddy's rejection of her own glasses, and the sharing of the curious event of Leland's hair turning white over night. 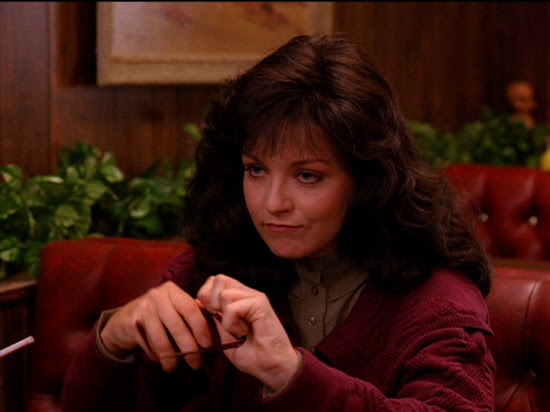 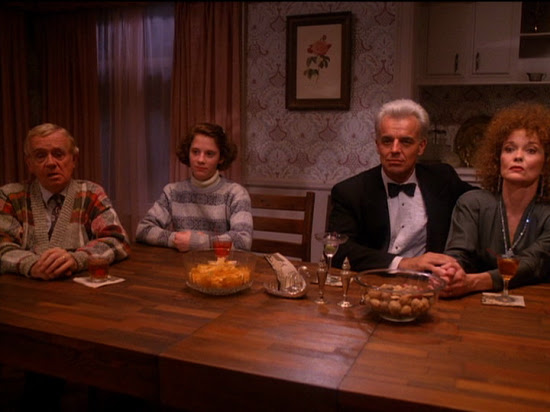 The episode's coup de grace is the Haywards' dinner party at the end. Here Lynch assembles such a fascinating group of subtly strong characters with their own perceivable motives. There's the odd, genius little girl with the inexplicable north eastern accent, somehow making it seem very mature that she's proud of being the fairy princess in her school play. There's Donna's other sister, whose bad poem about Laura is a perfectly used bad poem--it describes her character, which is followed up by her nervous laughter when Doctor Hayward breaks the ice about Leland's hair. The doctor has the tact to know when to ask the question, while the sensitive young girl, who'd been curious about it, is clearly halfway now between feeling comfortable acknowledging it and feeling like it's a taboo subject.

Then Leland's singing--so perfectly a man manically attempting to force reality to seem okay. His fainting fit at the end is like something out of a Victorian novel, but it works perfectly fine in the modern context. 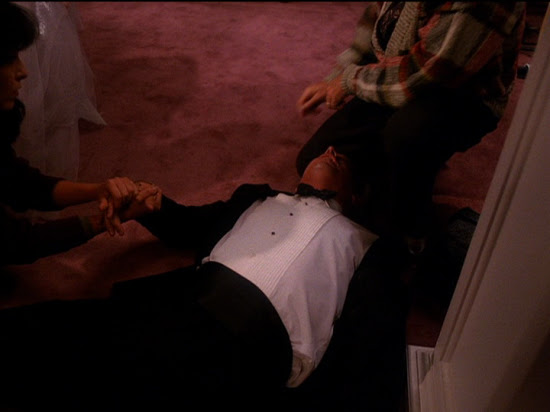 The episode has a lot of great visuals, too, especially Audrey's encounter with her father at the Canadian brothel. 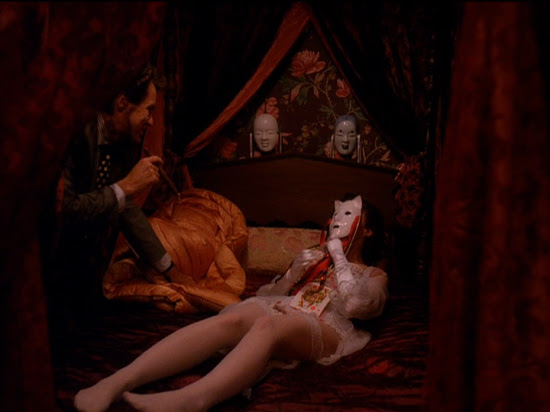 Posted by Setsuled at 9:38 PM
Email ThisBlogThis!Share to TwitterShare to FacebookShare to Pinterest