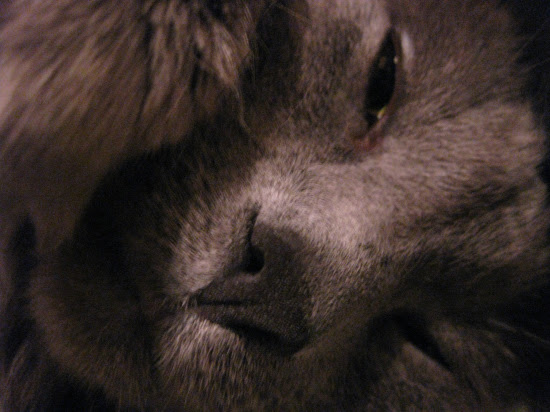 This is Tim's cat, Charlie, sleeping next to me last night in a somewhat undignified position while I played World of Warcraft. 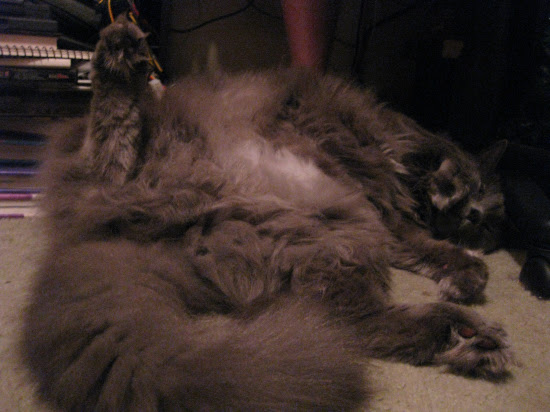 To-day I found my sister's cat, Saffy, with the somewhat more refined taste to occupy an entire antique couch; 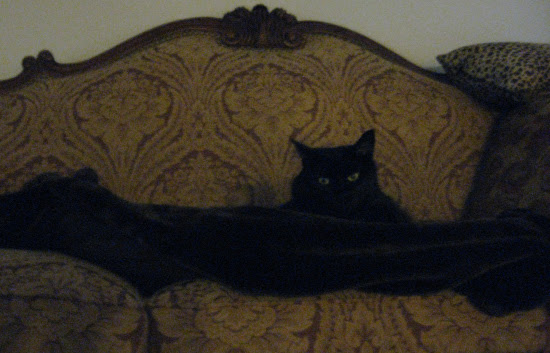 I have been trying again to get into World of Warcraft. I did have kind of a good time last night, levelling my undead warrior to level 57. I still don't know if I want to spend thirty dollars on Burning Crusade.

I want to enjoy WoW more than I actually do. I feel like I've lost touch with some vitally important gamer aspect of my soul, the same part that's having trouble nowadays enjoying Splash and Willow.

But last night just seemed really good. WoW was fun, then I got home and beat a guy at chess I'd been losing to consistently for days; 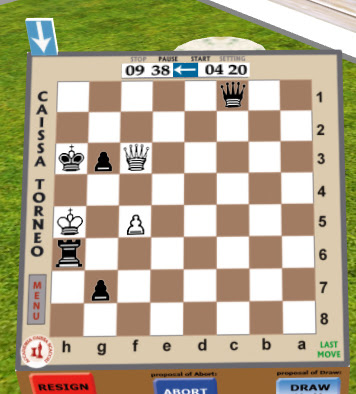 I was playing black, and my final move was to move my rook from f6 to h6, after he'd moved his King from g5 to h5 to get out of check by my Queen. Both Queens on the board were promoted pawns, after the original Queens fell to an exchange early in the game. It was a really long and mostly even game, the sort I like best, even if I end up losing.

But I was happy to win, though I kind of wish I wasn't, as I figure losing wouldn't be as bad if I didn't enjoy winning so much.

I was also pleased to come across this nice pole dance video (NSFW);

A few months back, when I was talking about how intense pole dancing seems to be getting, I'd wanted to post an example video, but the most impressive ones I'd seen had been removed from Daily Motion, and YouTube's were all the kind without nudity--I suppose it might be just my personal feelings, but to me the phenomenon of pole dancing without stripping seems reflective of a philosophy that says women who take their clothes off are less virtuous. It just depresses me. Anyway, part of what makes the pole dancing so impressive is that the woman can make it seem like it's all about being sexy when you have to figure 70% of her concentration is going to not cracking her skull open.

It reminds me of a conversation I was having with Tim last night about the sabre duels in the Star Wars films--how the duels in the original trilogy were better because they were more in the service of something else, developing character and story, while in the prequel trilogy they were more just about themselves. As Tim said, it seems at times like they're going out of their way not to hit each other.

This is why dance in movies, generally speaking, was so much better in the 30s, 40s, and 50s than it is to-day in popular forums for dancing, like Dancing with the Stars. For one thing, the dancing's simply not as good, but mainly it's that it's too self-absorbed, too much for its own sake. It's too much about showing off and not about exercising great skill and talent to deliver something to the audience.

The last bastion of respectable dancing is the stripper pole.
Posted by Setsuled at 7:44 PM
Email ThisBlogThis!Share to TwitterShare to FacebookShare to Pinterest