I had so little time yesterday for anything but my comic that I wasn't even able to watch an episode of Doctor Who. I did, however, thanks to The Howard Stern Show, take in a lot of Mel Gibson losing his mind.

After days of making fun of the tapes--not just for the surprising diversity of bigotry casually on display, but also for the random, bizarre things Gibson says in anger ("I'll burn the goddamn house down but blow me first"), and the weird heavy breathing, Howard and his crew finally started asking themselves if they could see where Gibson was coming from in any way. Howard pointed out it was weird that he would give the woman so much power--that he needed a blow job from her, and he's willing to say so, instead of going out and getting it from someone else which he could do presumably with ease. Which is a point I doubt many other media outlets are making.

Stern also pointed out that we all have our moments of over the top anger, and that Oksana, the ex-wife, probably sounds calmer in the recording because she knew she was being recorded. To which I'd add, there are few things more infuriating than being in an argument with someone who seems totally emotionally disconnected from the argument, and you'll notice the one time Oksana starts to raise her voice, Gibson laughs and says, "Ouu, you're angry now!" I tend to find only one person can really be spitting fire in an argument at a time, possibly because when you're looking at anger from the outside, it can seem automatically foreign and silly somehow.

Of course, that doesn't really speak to Gibson's racism or infantile expectation Oksana should be ready to blow him at all times. He goes on about how he deserves it, how he works hard for Oksana--to which Robin Quivers said something like, "I don't see him out breaking bricks." It all rather fits in, to me, with Braveheart and Passion of the Christ--the guy has a Christ complex. It's really inconvenient for him that his life's so good. He needs to be publicly dismembered by England as a sacrifice for Scotland.

He kind of reminded me of Broderick Crawford in Born Yesterday, which I watched to-day while I ate breakfast. It wasn't a bad movie--sort of Pygmalion meets Henrik Ibsen meets Mr. Smith Goes to Washington. It's about a tycoon's (Crawford) girlfriend (Judy Holliday), an uneducated chorus girl, getting wise to the circumstances of her life. A lot of the plot hinges on her liberation, and it's brought about mostly thanks to her tutor, Paul (William Holden), who helps her learn to feel comfortable asking questions and asserting herself. I started thinking the story would work better if Paul were a lesbian, avoiding the bedrock of sexism the vaguely feminist story still rests on, but the more I thought about it, the more I realised I was reshaping the movie into Bound.

Anyway, Born Yesterday felt very stage bound, and I knew before I looked that it was based on a play--nearly all of it takes place in Holliday and Crawford's hotel. I rather wished director George Cukor had trimmed some of the scenes and embellished more on others. The moment Holden and Holliday meet and he tells her about how he'd like to take her around Washington DC, I immediately wanted scenes of the two of them roaming around monuments. But we have to sit through an almost totally superfluous scene of her playing Gin rummy with Crawford. It was a scene that maybe established early that Holliday had the intellectual capacity to better herself, but I'm not sure that was really necessary. More effective was a small cocktail gathering where Crawford meets with a congressman and his wife while Holliday chafes in the upper-class society.

The movie felt very 1930s to me, despite being made in 1950. The speeches about how democracy is supposed to work in contrast to Crawford's thuggishness sort of reminded me of Gabriel Over the White House and a number of gangster movies of the 30s. There's some nice, clever bits of dialogue in the beginning that reminded me of Cukor's earlier films with Katharine Hepburn, but I was surprised to read Born Yesterday was meant to be a comedy, as so much of it seems to be a sober illustration of the contrast between democracy and fascism in public and private life. It's a rather innocent piece, as far as that goes--Crawford is a fairly superficial tyrant, and the movie doesn't really take time to study his character. A scene where he hits Holliday in order to force her to sign some papers feels like it leans too heavily on the shock value that's not there anymore, and as a consequence it doesn't quite provide the character motivations it otherwise might.

The characters feel credible, if superficial, otherwise. Judy Holliday won Best Supporting Actress for the role, and she does ably display a working mind under the effects of a lifetime that's created emotional calluses. 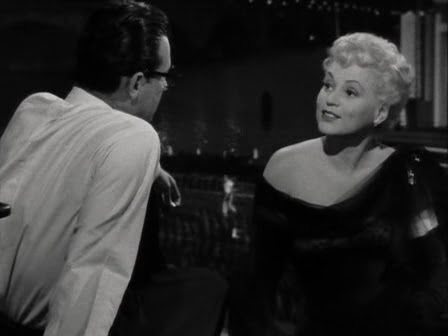