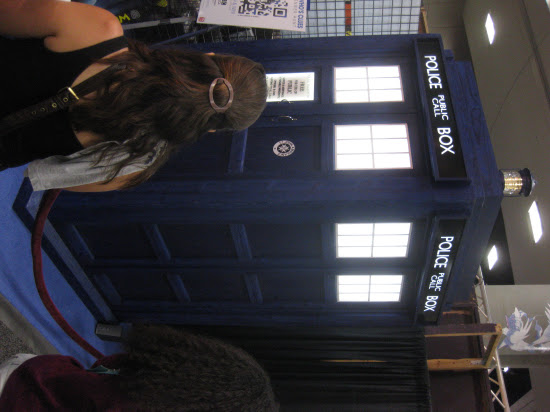 Doctor Who had a big presence at Comic-Con this year. Matt Smith and Karen Gillen did a panel on Sunday, which I didn't see because I figured it would be full of spoilers. Damn, I just looked at his Wikipedia entry and realised Matt Smith is younger than me. The first Doctor that's younger than me, that's a really weird feeling.

A saw a lot of people dressed as the eleventh Doctor at the Con, but I saw a lot more dressed as the tenth Doctor. I'm not sure how much that's related to his popularity or to the fact that his costume is the easiest and cheapest to put together. The best one I saw was this guy; 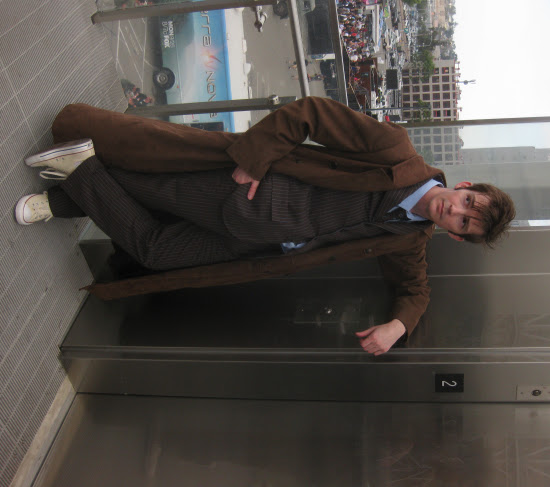 I guess because his suit actually fit him, though it's not tailor fitted to within a millimetre of its life like the ones Tennant wears.

There was one guy wearing a really pathetic excuse for a fourth Doctor costume (a scarf half the size, a sort of decent jacket, blue jeans and tennis shoes) but otherwise I'd about given up on seeing a classic series costume until Sunday, when I saw this great Romana II in line to play Guild Wars 2; 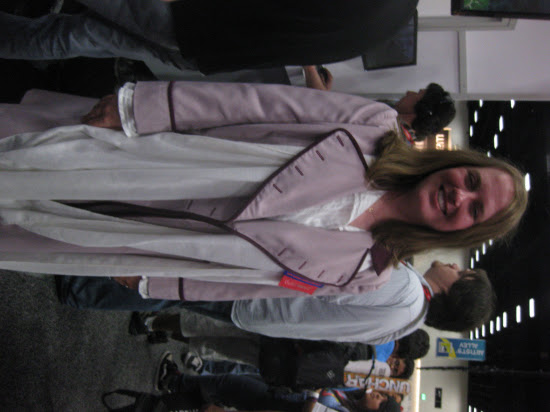 That's the other thing that had an unprecedentedly large presence at the Con this year--video games. I got downtown before 9am on Thursday and found machines were set up across the street from the convention centre allowing people to play Ultimate Marvel vs. Capcom 3. I'd played one of the Marvel vs. Capcom games, so I was somewhat familiar with the gameplay, but the guy I was paired against kicked my ass, despite the fact that I was manoeuvring around him and blocking his attacks better than he was blocking mine. This is because the Marvel vs. Capcom games are more reliant on button mashing to get you the big flashy combo moves that win everything now. Games like that are more like throwing dice than playing a fighter game.

I also played a new Playstation game called Scribble Shooter, which basically seems to be Galaga except all the graphics were drawn by the designer's 12 year old son apparently with markers on paper. I guess it's to Galaga what Paper Mario is to Super Mario Brothers. It was fun, though I'm not sure how long I would really dig the scribble gimmick.

These guys from Fallout: New Vegas were the first costumes I recognised (not counting the ubiquitous storm troopers) on Thursday morning; 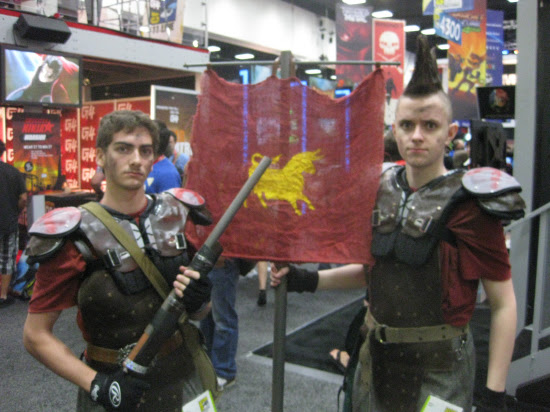 I packed my own lunch each day of the Con and sat in the upstairs corridor to eat it on Thursday where the anime kids normally hang out. I became aware of an extraordinary number of people asking the blue painted girl sitting nearby for pictures so I finally asked for one myself, and asked who she was dressed as while I was at it. 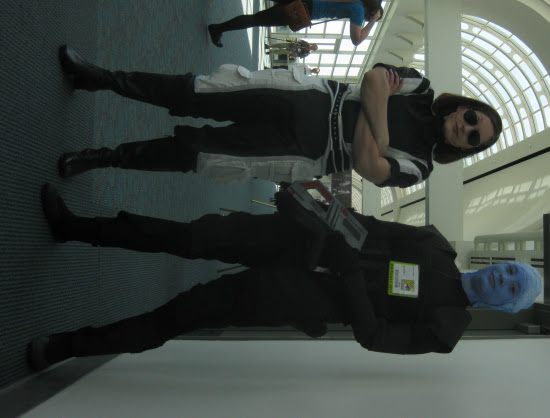 Turned out she, and the girl on the left who joined her, is a character from Mass Effect. I'd watched Tim play the Mass Effect games a bit, and I like the complex dialogue system, though I don't like how often the dialogue options you choose come out as something totally different when your character actually speaks them. I'm guessing this is meant to be rephrasing of the dialogue choices to keep the experience less repetitive while still using the gist of what the player chose, but the rephrasings are a little too drastically different for me.

Later, I saw the girl who was the original face model for the blue character in the exhibit hall; 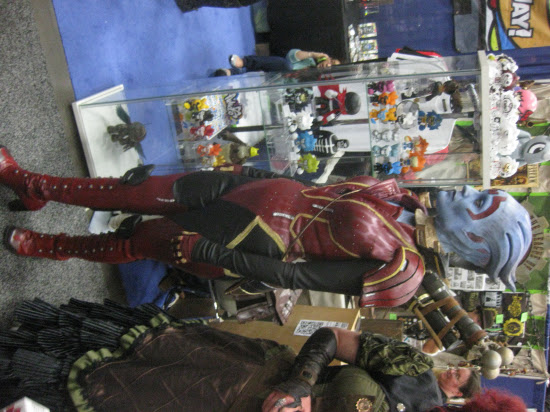 I did manage to play some Guild Wars 2, but as I've only just begun playing the first Guild Wars, I can't say much about how different the gaming experience is. But the things I'm hearing about the way dynamic events function in Guild Wars 2 have certainly whetted my appetite, and the fact that, as with its predecessor, it has no subscription fee is also very appealing to me. 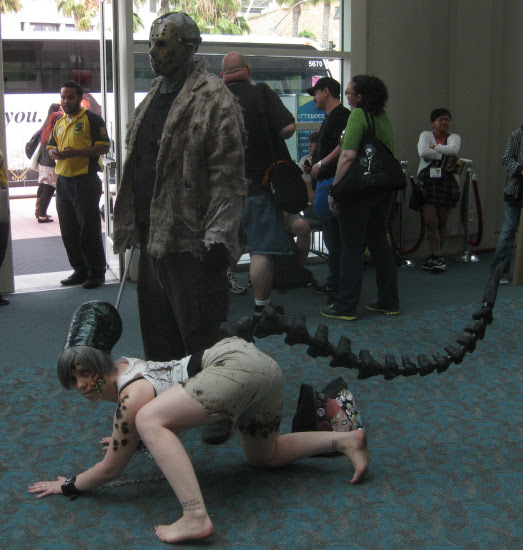 Posted by Setsuled at 2:49 PM
Email ThisBlogThis!Share to TwitterShare to FacebookShare to Pinterest