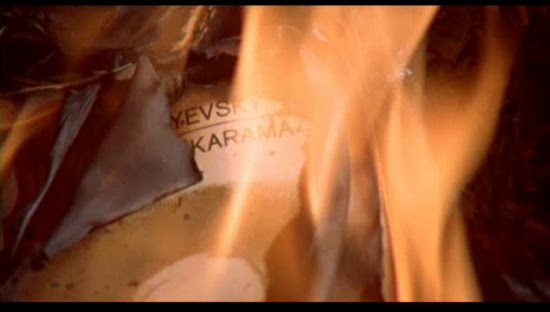 "The good writers touch life often. The mediocre ones run a quick hand over her. The bad ones rape her and leave her to the flies."

I guess Ray Bradbury was serious when he talked about his hatred of electronic publishing--I wasn't able to find Fahrenheit 451 at all on my Kindle, and Mr. Bradbury obliged me to actually go out into the sunlight, walk into one of the few bookstores left in this town, and buy a six dollar paperback. There's a bit in the book I'd been trying to remember for months--the essence of it had a strong and lasting effect on how I perceive literature. It's not the above quote, though the above quote seems more pertinent to what kicked the subject back to the fore of my consciousness, which was a blog entry Caitlin wrote a few days ago wherein she said;

Perhaps we should consider that all fantasy (including sf) is obscene, as it subverts the normative, immutable view of reality and revels wantonly in the infinite alternatives. It certainly violates. You might even go so far as to say fantasy rapes reality in that act of transformation, as there certainly is no consent involved, between the writer and the "real" world as we know it.

This seemed a ridiculous thought to me. Caitlin's an intelligent person, is good at what she does, but claiming that fantasy fiction rapes reality seems to be a ham-fisted and insensitive sort of idea to me. It seems designed more to make the whole subject of literary criticism cheaply provocative. Like trying to interest someone in Edgar Allan Poe by comparing his works to the Casey Anthony trial. On the other hand, it may be reflective of Caitlin's own particular relationship with the medium--I read to-day her "DOWN TO GEHENNA" in the new Sirenia Digest, which is a fascinating series of portraits of people in their own Hells. Her descriptions in physical and exterior terms of the torment each person goes through serves as a poetical exploration of internal torments.

But is she raping reality by doing this? It's certainly unpleasant subject matter, and one could say that putting these things together like this in a way they had not been before is an assault of sorts. It still doesn't wash with me. Bradbury's simile works better--the bad writer might be seen as a rapist if he cynically takes from reality without any idea of creating something intelligent or beautiful or illuminating. If he seeks to exploit with only the intent of short-sighted, personal gain. Because the metaphor can only work in terms of the writer's intentions--reality isn't an entity that can grant or withhold consent. Intent on the part of a woman is the only way in which we could really say she rapes a vibrator when she masturbates.

Anyway, the quote from Fahrenheit 451 I'd been thinking of comes shortly after the one I started this entry with;

"Thank God for that. You can shut them, say, 'Hold on a moment.' You play God to it. But who has ever torn himself from the claw that encloses you when you drop a seed in the TV parlour? It grows you any shape it wishes! It is an environment as real as the world. It becomes and is the truth. Books can be beaten down with reason. But with all my knowledge and scepticism, I have never been able to argue with a one-hundred-piece symphony orchestra, full colour, three dimensions, and being in and part of those incredible parlours."

This made a great deal of sense to me when I first read it as a kid--I mean, one could say that one very well can argue with movies and music in the form of criticism after the fact. But literature is distinguished by how it must at all times rely on your indulgence and must go through the filter of your cognitive process. If I wanted to imagine that Montag, the main character of Fahrenheit 451, looks like Humphrey Bogart, there's nothing the book or Ray Bradbury can do to stop me. Of course, you can do this sort of thing with movies as well, like how I imagine X-Men 3 doesn't exist, but it can't be done on such a fundamental level and movies aren't intimately tied to the weaving of conscious thought in the same way.

I've been quoting the character Faber, who's absent from Francois Truffaut's 1966 film adaptation of the book which I watched last night. One might wonder how Truffaut could omit such a crucial character, but I understand it--Faber's function is to directly explain things to Montag a filmmaker should be more inclined to tell the audience visually and it seems like he does this--the sort of national, cannibalistic narcissism Faber seems to ascribe to the society without books can be seen in moments like a girl on the train kissing her reflection, or Montag's wife gazing at herself in the mirror next to a framed photograph of herself. 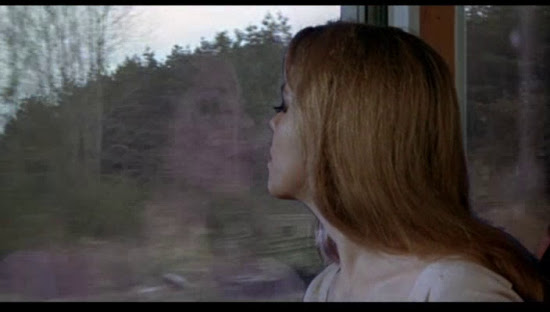 I feel the film may have been better off directed by Alfred Hitchcock--certainly Truffaut, a great admirer of Hitchcock, quotes him a lot in Fahrenheit 451, in his use of Bernard Herrmann for the score (apparently at Bradbury's suggestion), to his use of the famous Vertigo shot--the technique of zooming in with the camera while pulling back at the same time (or vice versa), a technique later made familiar by Steven Spielberg's frequent use of it in close-ups of actors. Even in his casting of Julie Christie in two roles, as Montag's socially brainwashed wife and as the misfit, secret book reader Clarisse, I was reminded of the two identities Kim Novak portrays in Vertigo. 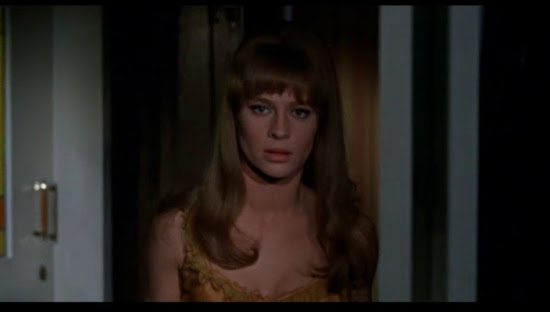 As the wife, I thought Julie Christie was beautiful for the first time in any of the movies I've seen her in. She's still not a knock-out, and as Clarisse with short hair, her introduction on the train falls well short of the breathtaking introduction Bradbury gives her; 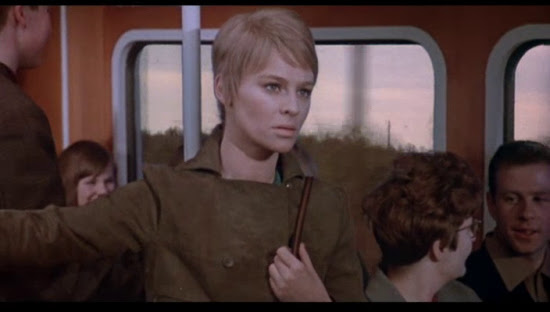 The autumn leaves blew over the pavement in such a way as to make the girl who was moving there seem fixed to a sliding walk, letting the motion of the wind and the leaves carry her forward. Her head was half bent to watch her shoes stir the circling leaves. Her face was slender and milk-white, and in it the kind of gentle hunger that touched over everything with tireless curiosity. It was a look, almost, of pale surprise; the dark eyes were so fixed to the world that no move escaped them. Her dress was white and it whispered. He almost thought he heard the motion of her hands as she walked, and the infinitely small sound now, the white stir of her face turning when she discovered she was a moment away from a man who stood in the middle of the pavement waiting.

Christie does capture this "gentle hunger" and "tireless curiosity" in her performance, and she's equally effective as Montag's simple, zombie-like wife seemingly motivated only by the pettiest concerns. And Truffaut's techniques have a lot of the unbound, intuitive language that was exciting about the French New Wave--there's a fade to red at one point, use of black screen blocks to emphasise a character, a strange moment in slow motion when Montag's boss questions him. But ultimately this seems to me a case where the book is better than the movie, and maybe that's as it should be.
Posted by Setsuled at 8:20 PM
Email ThisBlogThis!Share to TwitterShare to FacebookShare to Pinterest