Know Where the Tin Can Knows to Go 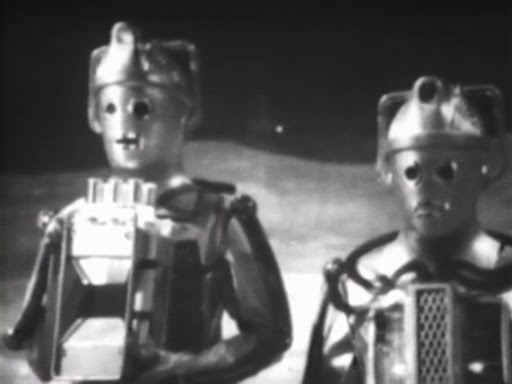 Sometimes I think I'm the only one who likes alien planets anymore. The two part Cybermen episode of Doctor Who--"Rise of the Cybermen" and "Age of Steel"--is the first one to really disappoint me from David Tennant's tenure. Although I don't really hate the full armour, alternate universe design for the Cybermen, I do hope it remains alternate universe. Somehow I doubt I'll get my wish. For me, the original Cyberman look from The Tenth Planet is the creepiest; 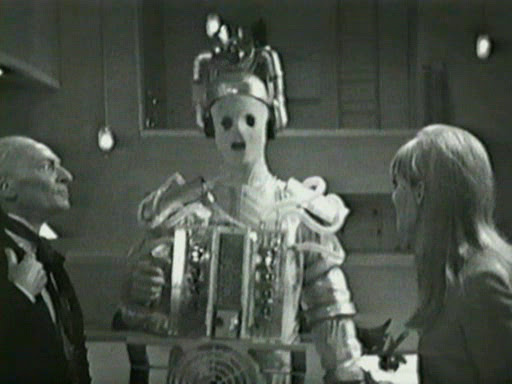 The vulnerability implied by the largely sock-like outfit suggests the mutilated fleshy bits to me. I guess it also kind of suggests someone robbing a liquor store. "Rise of the Cybermen"/"Age of Steel" (Gods, just go back to serial format already) seems to borrow a bit from the birth of Darth Vader in Revenge of the Sith, which reminded me that that movie was actually kind of effective with that. It also plays off the idea of Cybermen defeated by emotions reintroduced in their brains from The Invasion, but with some more sympathy for the Cybermen. Though I can't say a big part of what made that Cyberman screaming through the sewers disturbing was lack of sympathy for the poor bastard. I also missed the tin foil cocoons newborn Cybermen tear their way out of.

The climactic speech the Doctor gives to Lumic, the alternate universe Cyberman leader, is a lighter weight version of the much better speech the fifth Doctor gives the Cyber-leader in Earthshock, that better established the difference in understanding of emotions between the Doctor and the Cyberman. But the biggest disappointment in the newer episode is that it's set on an alternate version of Earth. How much better it would've been if it had taken place on Mondas and had been the story of the actual beginnings of the Cybermen. I wish showrunner Russell T. Davies would trust viewers to not need to go back to the exact same supporting cast over and over. The guy lacks too much imagination. From the Wikipedia entry for "Rise of the Cybermen";

Early drafts of this story featured "Body Shops", where wealthy people would purchase new cybernetic limbs. Davies vetoed this element because he found it unbelievable.

Has he never heard of prosthetic limbs? Is that one really so far-fetched? Cripes. 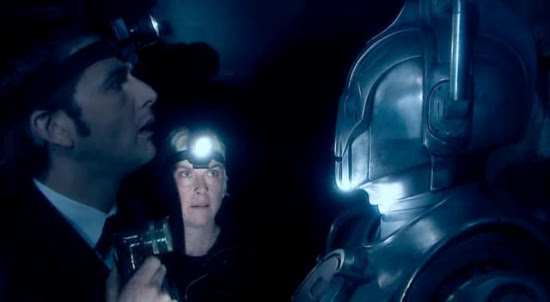