The Sword and the Dog 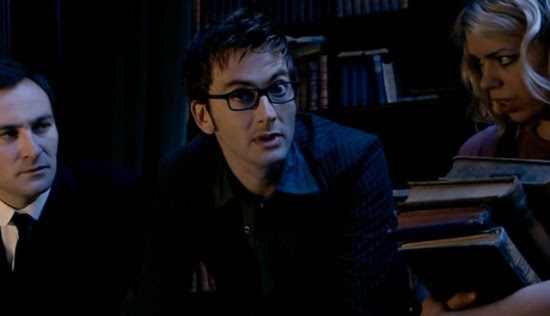 I guess I'm overdue for a Doctor Who post--I'm four episodes into David Tennant's tenure. It's early yet but I think I might like him better than Eccleston. Something about him connects with the character better. Of course, it helps that these first few episodes are much better than the last few of the previous season. I loved the language business in "The Christmas Invasion" and I always love when the Doctor has a sword fight, though this one was cut in such a way as to not give us a good impression of Tennant's skill, if any, with the sword. I suppose this helps with the verisimilitude--in any case, the Doctor seems to have lost some skill since The Androids of Tara;

Though I guess it is a very different kind of sword. Still, you know a man's a master swordsman when the ridiculously enormous scarf is no impediment whatsoever.

But back to Tennant--I was pleased to see the new show finally go to an alien planet, even if it was one called "New Earth" and centred on characters previously introduced. I suppose this is the primary difference between new and old Who--instead of self contained stories, the new series has its arcs spread over the season. This has its advantages and disadvantages--it gives us more time with some characters, and establishes a more permanent environment of characters thereby allowing for an evolution of relationships, but it also makes the scope of the show feel much, much smaller. The scope also feels a bit shrunk by the historical celebrity guest stars--"Tooth and Claw" wasn't too bad, except it would have been so much better without Queen Victoria. Who I guess was a bit schizophrenic, granting peerage to both the Doctor and Rose before exiling them. Also, there was this; 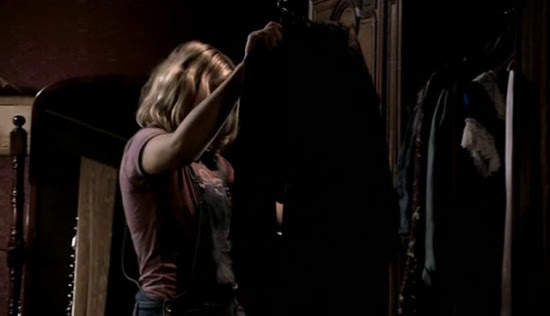 Rose finding a wardrobe full of clothes hangers decades before they were in common use. I know that's kind of a nit-pick, but it seems sloppy to me. However, "School Reunion" more than made up for the faults of "Tooth and Claw"--written by Toby Whithouse, I found I liked it more than any of his episodes of Being Human. It was nice seeing Anthony Head, but of course he was overshadowed by the presence of Elisabeth Sladen and K-9. Her feeling of abandonment and his need to pull up stakes all the time are actually played incredibly well. The episode works as a very good follow-up to the end of The Hand of Fear. And K-9--I can't believe how much I like the stupid robot dog, but I do. I love how they treat him like a regular dog. 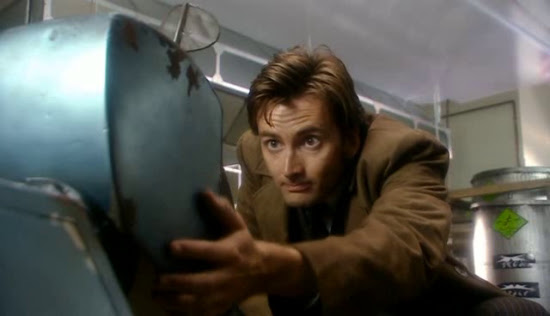