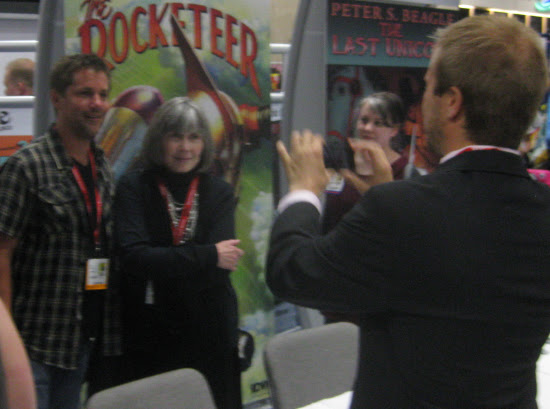 You remember who Anne Rice is, right? I've been thinking about how I possibly could've come across her at the Comic-Con practically by herself, how her booth wasn't surrounded by thick, impassable crowds of people like the TV studio booths. Maybe it's just because she wanted to keep a low profile--her name isn't mentioned at all in the Con programme. Maybe, since last I heard she actually lives in southern California, she decided to come to the Con at the last minute. But I couldn't help being struck by an odd contrast--I took this photo on Wednesday, Preview Night, the day before the Con officially began; 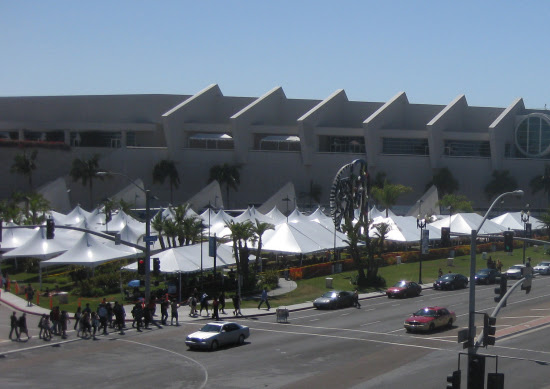 The people you can see under the white canopies are lined up for the Twilight panel scheduled for the next day. There was a True Blood panel almost as swamped--that's two things that arguably wouldn't exist if Anne Rice hadn't basically invented the vampire romance genre. Ten years ago, it seemed like no-one questioned Rice's place in literary history. I suppose the fact that she's gotten a lot of somewhat embarrassing publicity in the time since has damaged her legacy--her conversion to Catholicism and apparent aversion to her previous outlook on life, her hatred of fanfiction that led to her cautioning fans that online appearances by Lestat were not really him, and, of course, her blow-up at an Amazon reviewer. I admit this stuff was what first came to mind when I saw her, and I was about to keep walking when I thought to myself, "Don't be such a fucking hipster." I remembered how much her books had meant to me in the 90s, how I could read even one of her lesser books at bleak moments and be somewhat consoled by the familiar voice.

I stood there a moment and watched her autograph a small stack of comics with a silver pen and thought about what to say, having the distinct feeling that she's someone it's probably very easy to accidentally say the wrong thing to. When she handed the stack to the vender, I finally said something like, "Hi. I just wanted to tell you your books meant a lot to me--I used to read the vampire novels over and over."

"Thank you," she said, but I could see her eyes glaze over as she mentally tried to check out of the whole convention.

"I didn't know you had a comic," I said, looking down at the books.

"It's Servant of the Bones," one of her young blonde yes men answered for her as she walked away. Servant of the Bones was a novel she wrote in the 90s and I guess this was a comic adaptation. I correlated this with the fact that she's sold and auctioned off a great deal of her stuff in recent years and thought maybe this was a pure attempt at cashing in, which would explain why she wouldn't be particularly enthusiastic about meeting a fan. Maybe she's met too many fans, maybe she was tired from dealing with the Con, maybe it was something else entirely, I really can't speculate. But it's hard for me to imagine being in a place mentally where someone telling you their work was tremendously important to them was barely worth acknowledging.

Peter S. Beagle was at the other end of the spectrum--at the other end of the exhibit hall, too, in Artist's Alley (despite the fact you can see a poster for his Last Unicorn comic behind Anne Rice in the picture above) where Amee makes a point of seeing him every year. Every fan who approaches him he talks to for a long time in a small voice, barely audible over the exhibit hall din. He told Amee and I about his friend in France who has cancer and is in critical condition. He gave me the general impression of someone who really, really needs love. Amee talked Wendy Pini, one of the creators of ElfQuest, who Amee also always visits in Artist's Alley, into doing some artwork for Beagle which I thought was sweet and made me ponder the existence of an Artist's Alley community. 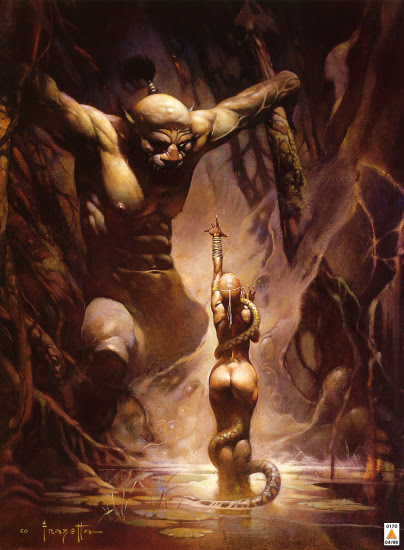 This is one of the Frank Frazetta paintings I saw on Friday. The second best panel I saw at the Con this year was Robert Rodriguez on Thursday who announced that not only was he going to be remaking Fire and Ice and making a movie based on Frazetta's painting Death Dealer but that he was opening a Frazetta museum in Austin, Texas. He also told us about the several Frazetta originals that he was having exhibited the next day, for which we needed to e-mail an address he provided to learn the time and location. The paintings went up for five hours in the Hard Rock hotel across the street and I took Amee with me since she drank a lot of tequila the day Frank Frazetta died. Prints and posters truly don't do Frazetta's work full justice--I was impressed by the texture and even more by the incredibly striking colour, especially bright oranges contrasted with foreground blue greens that create a sense of three dimensions and life. 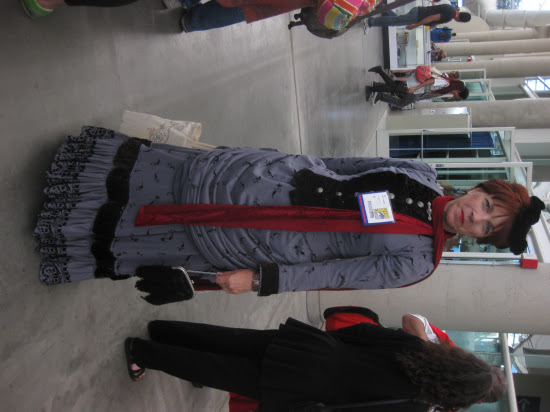 I have a whole bunch of pictures of people in costumes I still need to post. Probably that'll be to-morrow . . .
Posted by Setsuled at 2:55 PM
Email ThisBlogThis!Share to TwitterShare to FacebookShare to Pinterest