Am I the only one who thinks News International executive Rebekah Brooks looks like the main character in Pixar's upcoming fantasy picture Brave? I guess in much the way Pixar mined 1980s robot design for WALL-E, they've decided for their medieval fantasy film to design a character who looks like the heroine of every third fantasy novel published in the past three decades. And no, I'm not complaining, any more than I was complaining about WALL-E's less than original design. This is the look fantasy fans love and now it's its time in the limelight. Welcome. Sorry it happened when a real life doppelganger was in the news as a blackguard of epic proportions.

I mean, fucking wow. If you haven't been following this, I recommend checking out the Guardian's "Phone Hacking Scandal" page. But, boy, that name does not sell the thing for the magnificent panoply of batfuckery it is. A story that was originally little more than the humdrum phone tapping of prominent politicians and celebrities and a sting operation conducted almost single-handedly by Hugh Grant, became a tale of private detectives murdering a colleague, journalists planting text messages from missing children to give parents and authorities false hope, and an editorial staff that was in on the crimes, a ladder that leads all the up not only to Rebekah Brooks but to Rupert Murdoch himself. As a result, the 167 year old tabloid News of the World (somehow I suspect the paper's gone through some changes in that time) shuts down Sunday. If a story this splashy didn't usually end up in the hands of the least imaginative filmmakers, I'd say it might make a fantastic film noir one day.

In slightly less depressing and awe inspiring news from England, I finished watching the Doctor Who two-parter "The Impossible Planet"/"The Satan Pit". Sometimes the new Doctor Who reminds me of a dog who's been kicked in the face many times and has come back to the public to grovel and beg for affection. That's the impression I got from the stupid, ironic quips traded between Rose and the Doctor at the beginning of "The Impossible Planet" as they find themselves among the crew of a small installation on a small planet orbiting a black hole in the distant future. There's so much nervous energy in the humour as the people on the show seem desperate to keep the viewing audience engaged despite the fact that this episode takes place on one of those nerdy alien worlds. 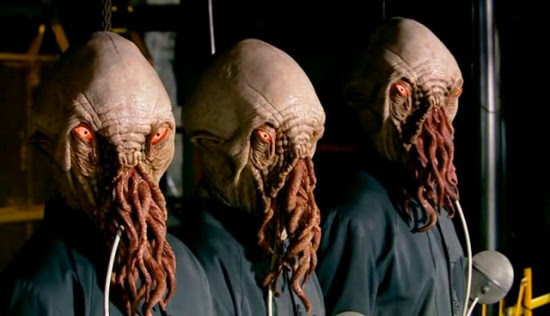 But I did appreciate the setting, and the H.P. Lovecraft references. I was less impressed by yet another injection of spirituality into the Doctor Who universe.

This new story is based in part on the third Doctor serial The Daemons, which I happen to have watched again recently. That serial presented the idea that all horned beasts present in various human mythologies were inspired by a horned alien from the planet Daemos who gave humanity many of its scientific advancements. In the 2006 story, a horned beast who claims to have come into existence "before time" takes credit for a universal prevalence of horned beasts in mythologies, including somehow on the planet Daemos where, er, horned beasts actually existed.

The main difference this time is that, instead of casually referring to Christian beliefs as myths (something I rather liked), the Doctor takes the beast's statement to mean that Satan, along with every other mythological horned beast, is real. The episode generally promotes faith, even having the Doctor take a literal leap of faith at one point, another depressing step away from classic Who's hard science fiction bent. I mean, it seems kind of bitter and personal, like Russell T. Davies, upon hearing about a big gun, announced that, oh yeah, he's got an even bigger gun and his name's God! I can't help thinking this is Doctor Who's Star Trek V. 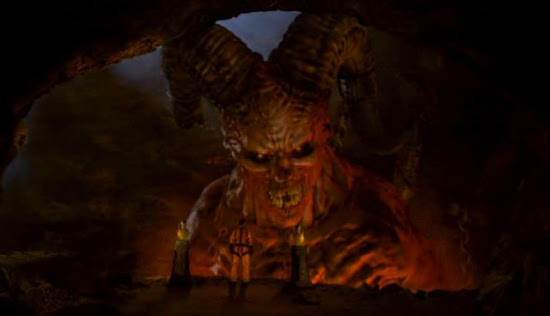 Posted by Setsuled at 6:04 PM
Email ThisBlogThis!Share to TwitterShare to FacebookShare to Pinterest