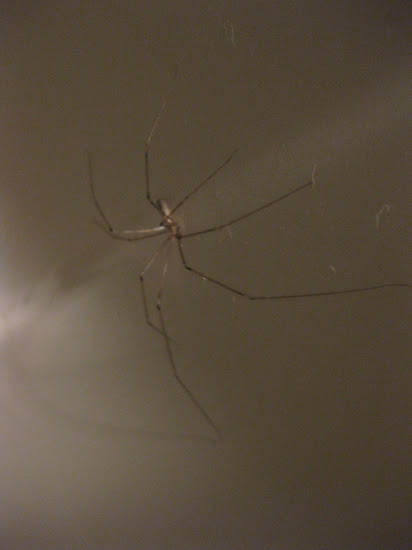 That's last night's daddy-long-legs in my bathroom. There's not a lot else to report in local arachnid news, except one of the orange spiders who's still small decided to make a massive web in front of the front door last night, nearly capturing me.

I got up at 11am to-day, and I think I might try getting up gradually earlier for Comic-Con, which happens the week after next. I'm trying to finish my comic, too, though I'm not sure there's any real point. I suspect I have a better chance of getting it published by mailing it out. Gone are the days when the likes of Jhonen Vasquez was able to get published just by dropping one of his comics off at one of the booths at Comic-Con. But I guess there's no harm in being prepared.

By complete coincidence, I was listening to Bob Dylan's "Leopard Skin Pill Box Hat" when I took this screenshot; 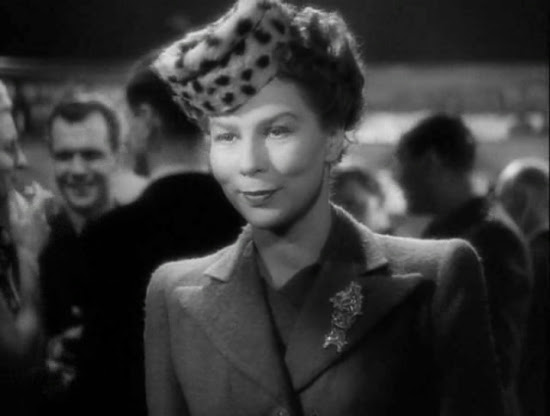 That's Wendy Hiller in Powell and Pressburger's I Know Where I'm Going! which I watched again a few days ago. I've always been fascinated by how ugly she is. She looks like Harpo Marx, or one of Cinderella's step sisters. The funny thing about beauty, or lack of it, is it makes me question if I see what I'm seeing. I'm in the camp that thinks it's sad not to express appreciation for beauty despite the fact that doing so inevitably acknowledges the existence of people who aren't beautiful. A society that teaches us to spare everyone's feelings creates an instinct that runs contrary to this. I think this is ultimately more damaging--it's an attempt to create a delusion, and truths that stay below the surface can have a more fundamentally damaging effect than those that are placed on the surface. In other words, someone who knows they're unattractive despite constant assurances to the contrary will be preoccupied with the question. Like a cat tied to a stick, as the Radiohead track goes.

On the other hand, sometimes you get mysteries like Wendy Hiller. Was she cast in the romantic lead because of different standards of beauty? Possibly. Both Deborah Kerr and Moira Shearer, stars of other Powell and Pressburger movies from the period, are gorgeous to me, but have some facial features I think might impede their careers in modern American Hollywood--mainly the eyes that are relatively close together, smooth cheeks, and larger jaw. I suppose one could say this about Renee Zellweger, though I guess part of her appeal is that she's the not-so-attractive "every girl". Maybe that's the point of Wendy Hiller, actually, except there's something cold about her. I mean, that's kind of the point of the movie, is how she lacks a certain basic human warmth. So it's a romantic comedy that stars a woman who's both unattractive and cold--I don't think I've ever seen that combination in another movie. If it's not merely due to different cultural standards of beauty, the choice is rather fascinating. It makes her seem more vulnerable, I guess, and makes her iron confidence funnier.

I dreamt last night the second Doctor on Doctor Who was performing brain surgery on himself. I remember him lying on a metal slab, shirtless, his head turned to an odd angle and one of his parietal lobes suspended above him on a tray. He seemed utterly unperturbed as he worked on it with his sonic screwdriver.
Posted by Setsuled at 3:13 PM
Email ThisBlogThis!Share to TwitterShare to FacebookShare to Pinterest