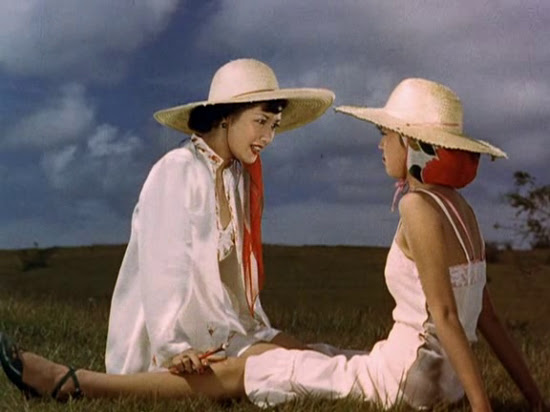 I didn't think Carmen Comes Home could possibly be a good movie. I watched it, I think, out of a completist compulsion, since, made in 1951, it's Japan's first colour film. And as a film, it's not really great. It has a lot of things I had big problems with, but I found it fascinating nonetheless.

It's directed by Keisuke Kinoshita, who made immensely popular films in his day, but I've always avoided his work because it sounded like it was popular because it was sentimental and insubstantial. And Carmen Comes Home is certainly both of those things. But I've long been fascinated by how post World War II Japanese films deal with the changes occurring throughout the country and the impact those changes had on the people. In this case, we see a young woman, Aoyama Kin, "Lily Carmen", played by Hideko Takamine, returning to the small country village of her youth after she'd spent years in Tokyo working as a burlesque artist. She brings with her one of her fellow performers, and the two clearly represent the manifestations of western culture in Japan, broadly contrasted with the innocent, old fashioned villagers. 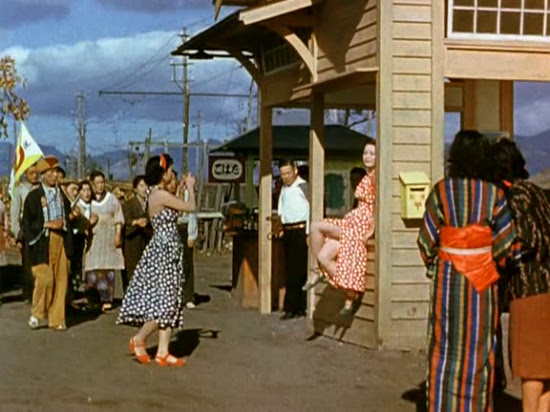 Carmen and her friend wear western style clothing, but like the characters themselves, the clothing is a broad, parody version of real styles. You rarely see either of the characters without seeing a great deal of their legs--there's a pretty cheap scene where a pianist, blinded during the war, has his performance for the entire village interrupted by broad comedic business of Carmen's friend's skirt falling off and the entire village laughing at her in her massive pink drawers, which the blind man misinterprets as laughter at himself and his performance.

There's a lot of that kind of cheap emotional manipulation going on. Yet, there are a lot of nice compositions and there are some good performances by Koji Mitsui, the gambler from The Lower Depths, and Chishu Ryu, Ozu's favourite actor, as the schoolmaster. And Hideko Takamine rises above the broad comedy of her role with some genuinely decent, and strange, musical moments.

Partly I think it's that, from outside the intended audience of the parody, the language of that parody becomes intriguingly weird. So Carmen Comes Home works out to be a bad movie, but a captivating one. 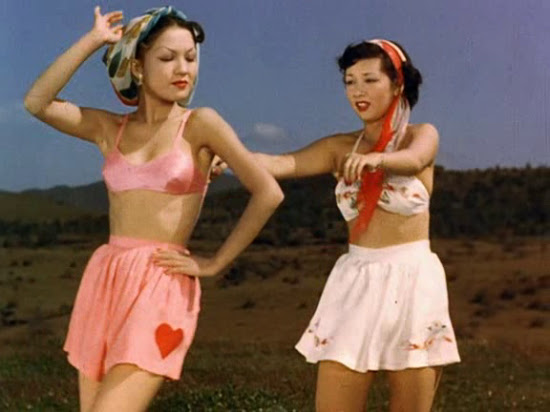 Posted by Setsuled at 2:16 PM
Email ThisBlogThis!Share to TwitterShare to FacebookShare to Pinterest