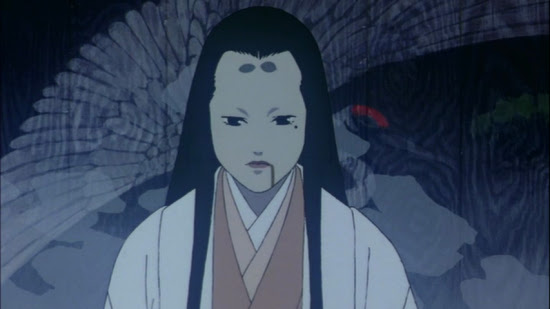 What the hell is wrong with pancreases these days? I just found out (or was just reminded, I'm not sure which) Satoshi Kon died from pancreatic cancer suddenly last year. Is it crass to compare the valuable contributions of people who've died of pancreatic cancer? Well, in any case, I'd say Kon is my favourite recent victim of pancreatic cancer.

Though I've only seen three of his films and the one I watched last night, Millennium Actress, is my least favourite so far, though it has its virtues.

I became interested in watching Millennium Actress when I read its story is centred on a fictional actress based on Setsuko Hara. The movie is rather a touching valentine to classic Japanese cinema and the legend of Setsuko Hara in particular. It is somewhat startling to know that she has now outlived the director of this tribute to her. 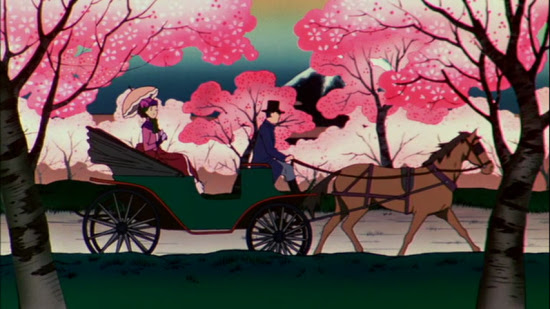 Setsuko Hara's Wikipedia entry currently describes her position in Japanese popular culture rather evocatively in the bad English of a not exactly encyclopaedia appropriate description from an apparently devoted fan;

Her star image was closely bound to the national imaginary,in which the ideology of the virgin harbored an ideal of cultural purity. Hara Setsuko's screen persona is one of tight control,under which a current of strong emotion can often be detected. Part of her popular appeal was due to a certain honesty and integrity of character,enhanced by the home drama genre that kept her in extremely plain costumes.However,she also excelled in expressing highly contradictory and conflicted emotions.She can be at once hopeful and doubtful at marriage proposals;she laughs when she is most sad and cries when she is most happy.The contradictions and tensions within Hara's star image are very much bound up with a nativist sensibility, a longing for the past combined with a recognition of the impossibility of such a return. Among her secrets is her reputed quarter-German heritage that may account for her slightly Caucasian look.After seeing a "Hara Setsuko movie" the novelist Endo shusaku writes,in a typically reverential response,"we would sigh or let out a great breath from the depths of our hearts, for what we felt was precisely this:Can it be possible that there is such a woman in this world?" Endo is one of several men whom dream of meeting Hara just once before they die.Hara was so refined,so moral,so beautiful,so representative of all that Japanese men valued in woman that she remained excitingly out of reach for the hordes of males who adored her.

This entry is pretty light on cited sources, but if one is wondering how well this reflects Hara's actual reputation, one needn't google far to find articles like this one. I wonder if this "virginal" image is one of the reasons Kurosawa's adaptation of The Idiot wasn't very successful, a movie in which Hara played the very sexually experienced character based on Nastashya Filipovna. I wonder if she chafed at the image and whether it played any part in her dramatic and abrupt retirement in 1962, when she announced at a press conference that she'd never enjoyed acting and had only pursued her career to support her family.

Kon, though, decided to go all in on the virginal mystique, showing Chiyoko, the character apparently based on Hara, as meeting her one and only true love as a child and then, when he vanishes shortly after their meeting, the movie shows her pursuing a movie career with the sole intent of making her face famous so that he can find her.

Though the movie does have Chiyoko, unlike Hara, marrying at some point, it's to her frequent director, a man named Otaki, which brings to mind the fact that people made something of Hara's retirement coinciding with the death of Ozu, who directed her in some of her most famous films. In any case, Chiyoko never seems to give her heart entirely to Otaki.

One of the things I liked about the movie was the fairy tale quality given to Chiyoko's "eternal virginity", showing her being cursed by a witch to an "eternal love" that can never be consummated. 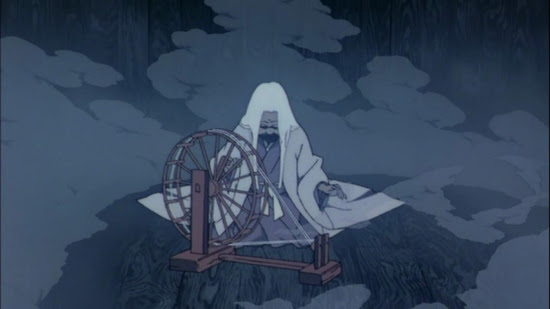 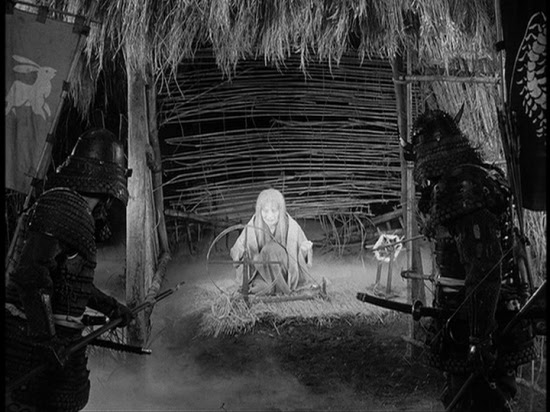 The witch bears a striking resemblance to the one seen in Kurosawa's Throne of Blood and the movie's filled with visual references to classic Japanese cinema, though no real film is explicitly referenced, instead we get a series of type facsimiles. I found this diluted the effect somewhat. Throne of Blood, based on Macbeth, is a much better story than the somewhat more mundane tale shown in Millennium Actress of a woman avenging her dead lord. One sees bits of Godzilla and Lady Snowblood without the actual impact of those films.

Like Perfect Blue and Paprika, Millennium Actress centres on a woman constantly shifting between reality and a dream world, in this case between real life and Chiyoko's filmography, which she relives as she's being interviewed by a former movie studio employee and a cameraman. It's this cameraman who creates another of the fatal flaws in this film. Unlike Perfect Blue and Paprika, where the shifting between realities has an immediate psychological kick to the characters, the impact of the shifting is constantly diffused by the interview camera man whose casual manner is always there to remind us that we're not actually seeing the characters shift between realities but instead its a visual metaphor for their reminiscences. 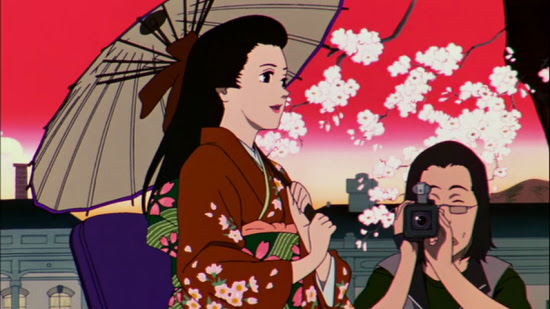 There are some great visuals in the film, but not nearly as many as there are in Perfect Blue or Paprika. It seems to me Paprika was the perfection of a type of storytelling Satoshi Kon had been working on all his life. Now it's become his last completed film, though studio Madhouse, from his notes and storyboards, is putting together a film called The Dream Machine, which I certainly hope shall be completed.

With breakfast to-day, I read the newest Sirenia Digest, which was good, particularly the second story about a circus bat girl.
Posted by Setsuled at 5:19 PM
Email ThisBlogThis!Share to TwitterShare to FacebookShare to Pinterest