"It was a Big Time, when Big Men Drove Nothing but Huge Ford Cars"

I was pleased to see this week's Zero Punctuation is about how much Gears of War 3 sucks. Normally I could care less about the latest faceless parcel of shooter shipping to stores. But this one was using a great Mazzy Star song in its commercial.

I guess the feeling you're supposed to be left with is, "No matter how much you and your bros rock, it's futile in the face of the end!" Notice it's recorded live off a television, I guess Epic Games weren't interested in having this one online. It seems to be the latest in a new style of video game commercial, like the Dead Island commercial, that grabs for an easy sense of depth by pairing solemn music with violent id candy. The carrot of foreboding so you have an excuse for mindless shooting. Even that wouldn't particularly bother me--though it wouldn't excite my interest either--except I hate that fucking Wide Guy American aesthetic. The one whose ancestry seems to go back to pro-wrestling and has grown in influence thanks to World of Warcraft. This perplexing fondness for the squat and, like Yahtzee points out, the impression of an image stretched to fit the wrong aspect ratio. 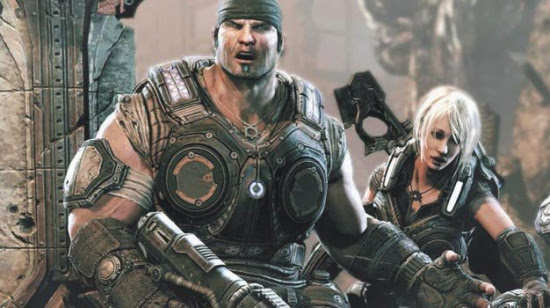 Get your dumb, meaty mitts off my Mazzy Star. Does he look like he has manhole boobs to anyone else?

I see the game's story was written by Science Fiction novelist Karen Traviss, who'd previously written novels based on Star Wars games. She liked to write about Mandalorian culture but, according to Wikipedia;

. . . in 2009, much of Traviss' works in reference to the Mandalorians and their heritage was retconned in a series called Star Wars: The Clone Wars. The exact reason for the change in continuity remains unknown to this date, but it prompted the author to cancel a further three novels which were planned to release in late 2009, and early to mid 2010.

I thought it was a pretty well known risk of writing in the so called "Expanded Universe" of Star Wars, that George Lucas could at any time decide to contradict you. Didn't she know what she was signing up for? Maybe she was emboldened by the near inclusion of Knights of the Old Republic's Darth Revan in Clone Wars. I kind of sympathise with her in that I suspect writing on Clone Wars isn't markedly greater than hers.

Posted by Setsuled at 1:46 PM
Email ThisBlogThis!Share to TwitterShare to FacebookShare to Pinterest