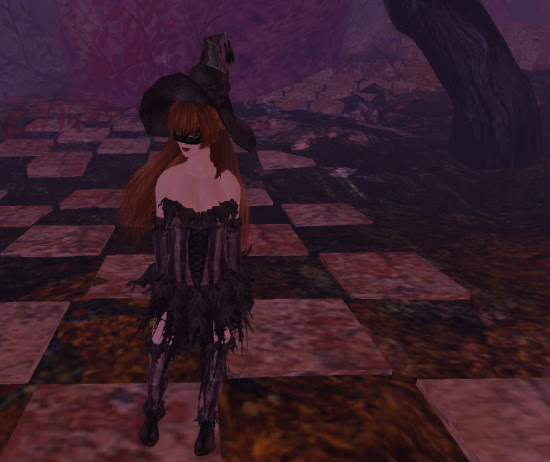 The outfit my avatar wore to yesterday's chess tournament. It's by Caverna Obscura. The picture was taken in the sim where Evie's Closet is located. It kind of looks like it would be a nice chess sim, doesn't it? Sadly none of the SL chess sims are much to look at. 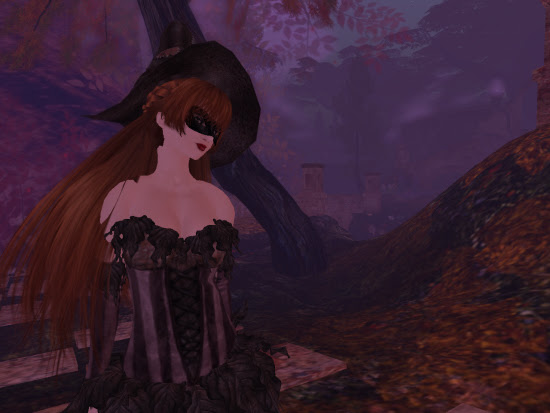 Dressed for Halloween, obviously. I think I'm going to watch only horror movies, or movies that could arguably be horror movies from a reasonable point of view, between now and Halloween. Feel free to recommend one to me if you'd like to see me write about it here.

Last night I watched Ingmar Bergman's Wild Strawberries, though. I'm not quite up to writing about it--I'm too grouchy and resentful after being buried under a pile of homework to-day, mainly my history midterm, which was a five page essay. Mine ended up being something like 4.3 pages. I'm not going to pad it out, I don't even want to look at it anymore. I hate the prompts in that class. For this, we were supposed to describe American imperialism in the late nineteenth and early twentieth century and argue either in favour of or opposition to the imperialism. I didn't think it was a simple enough topic to be confined to a thumbs up or thumbs down response, and I said as much in my essay. I quoted Mark Twain talking about how he thought the U.S. conflict in Cuba was a righteous war and how strongly he was against the annexation of the Philippines. I'm so tired of these classes. I don't think my essay's very good, and I'm annoyed I'm not writing a better one, it's just I'm more annoyed about having to write it in the first place.

It's kind of weird how little attention the end of the Iraq War is getting. In addition to saving the lives and the mental health of a lot of American soldiers, maybe it'll save a few billion dollars a month and help the U.S. economy.

I was also watching Return of the Jedi: Classic Edition last night. No, that's not the official title, it's just what I call it because I think it's the title that would piss off George Lucas the most. Though, when it comes to Return of the Jedi, I'm not sure I mind the revisions as much. That movie, in its classic form, is already sort of like the prequels. Better performances, sure, drawing from better characterisation established in early films, though dropping the ball on so many of the things started in the first two films. I've talked about this before--things like Vader's motives getting more two dimensional than in Empire Strikes Back, the seduction of the dark side not really happening, and the general flattening of Luke, Han, and Leia's characters. Part of me, I guess the part that likes to attach massive significance to the impact of the Star Wars movies, wonders if the failure of Return of the Jedi to answer questions posed by The Empire Strikes Back reflects or even contributed to a spiritual rot in American society. Like if we're ever going to be able to mobilise on environmental, civil, and economic issues I wonder if we're going to need a movie satisfactorily explaining why the Empire was wrong and the Rebellion was right. Why the cold efficiency of the Empire isn't preferable to the awkward and vulnerable Han, Luke, and Leia.

Anyway, I'm not sure if "Lapti Nek" is a better song than "Jedi Rocks" or if I just prefer it for nostalgic reasons.

"Lapti Nek" is sexier, rougher. It makes me want to fuck Oola more somehow. "Jedi Rocks" seems more like kid's music. Which may have been the idea, I guess.
Posted by Setsuled at 7:43 PM
Email ThisBlogThis!Share to TwitterShare to FacebookShare to Pinterest