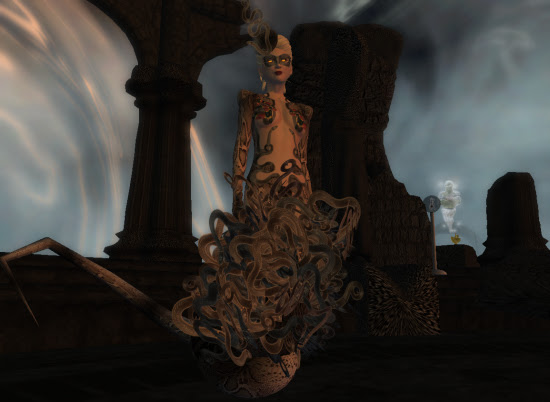 The outfit my avatar wore to Saturday's chess tournament, again by Vita's Boudoir with a mask by Illusions. The picture was taken at Retropolis. 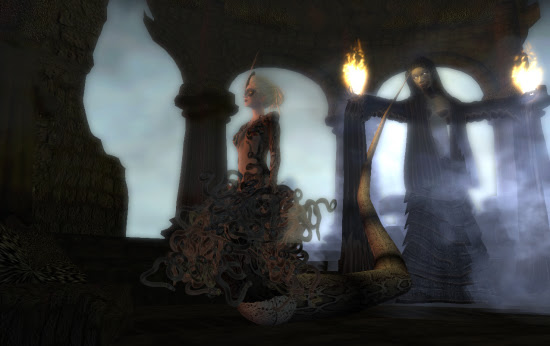 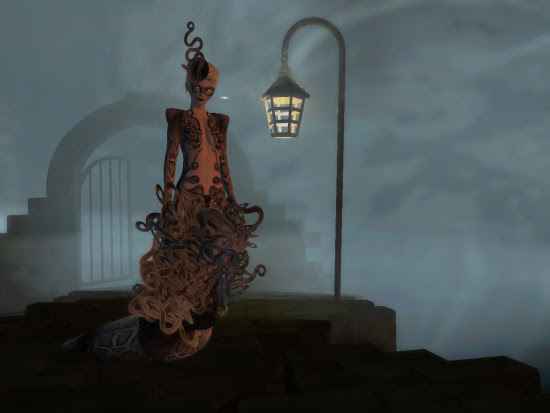 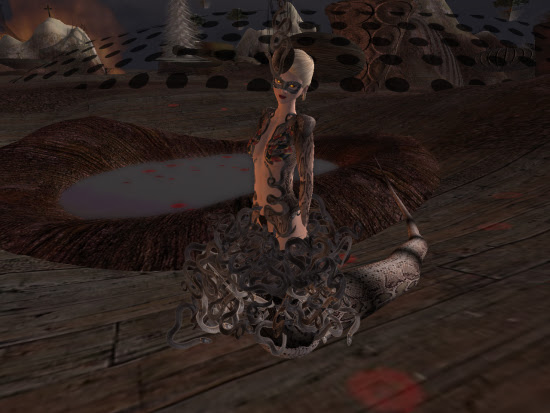 This picture was taken at Risk City. The next two were taken at Dragonfly; 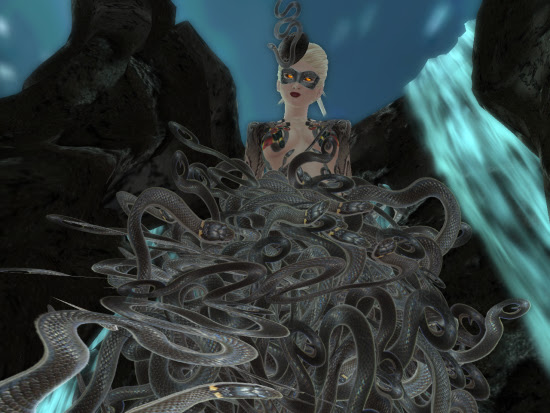 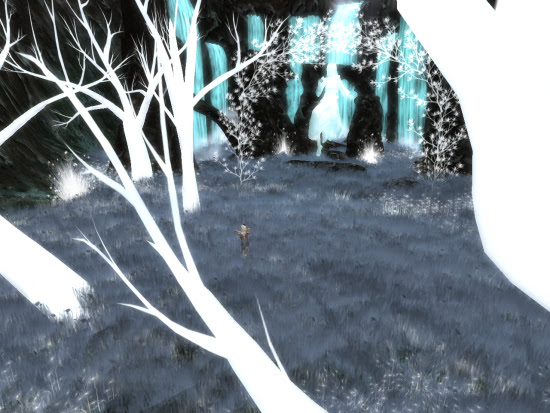 I've found myself thinking more about Steve Jobs. I was at my parents' house on Saturday, and I could tell my mother and maybe my sister both seemed to feel Jobs was a great innovator, pretty much like the rest of the world. Maybe the key there is that they both have iPhones and I don't. Maybe I'd feel differently if I wasn't too poor to afford Apple products.

It's one of those occasions where I feel sort of like the sickly weird wildebeest trailing behind the herd, so I watched the video of Jobs' Stanford graduation commencement speech Caitlin posted on her blog;

I was only able to watch half of it at first. I just can't seem to handle it when people brag about themselves, and when I saw at least part of the speech was going to be Jobs talking about how wonderful he is, I had to switch off. But I guess that might be the expected thing for commencement speeches, and displays of great self esteem is kind of an American cultural norm now, so maybe it's expecting a little too much holding these things against Jobs particularly. I also didn't really respect his casual reference to Microsoft's Windows basically stealing the format of the Mac OS when in reality Microsoft and Apple both "stole" the interface from Xerox. It's not an argument I've particularly held against Microsoft or Apple. To me, that's sort of like saying every car made now is a rip off of the Model T.

But once past all this, I did find the philosophy Jobs expressed of doing what you love, consequences be damned, is a philosophy I have tended to agree with, though it seems to be contradicting many of the people now praising Jobs, including Caitlin, who was critical of the "fuck plan B" Twitter trend. What better way to say "fuck plan B" than to drop your regular college classes to study calligraphy?

Anyway, I tried to think about how the iPods and iPads were really wonderful, life changing innovations. Inasmuch as I can see that the iPad is clearly modelled on the PADD introduced in Star Trek: The Next Generation, I can kind of understand it. 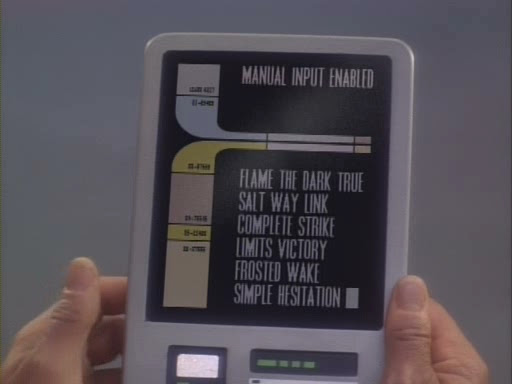 I think one of the reasons Doctor Who seems to be more popular now is that Doctor Who always had the police box, was always kind of blasé about "futuristic" when that was largely the appeal of Star Trek--so much of the once fascinatingly futuristic look of Star Trek has either already come true or just looks dated. But I remember thinking how neat it was the characters could access so much information on those sleek little devices.

I mean, I agree with David Lynch that it's sad people think watching movies on the little screens is just as good as watching it on a big screen. But as with my Kindle, I can't ignore the utility this might potentially introduce. Even as I certainly think reading from a real book is a superior experience, I can carry whole libraries on my Kindle and grab thousands of free masterpieces off Amazon at a moment's notice. I watched His Girl Friday on my iPod when the power went out, after all.

So, okay. What am I saying? I don't quite understand the devotion people have to Apple, particularly to their aesthetic, but I'm sorry you folks lost a person involved with something you love and I can sort of vaguely understand. Well, I'm really trying.

Damn, I still feel like the sickly wildebeest. Maybe it was all that Vietnamese food I had for lunch.