And Now for Something Familiar 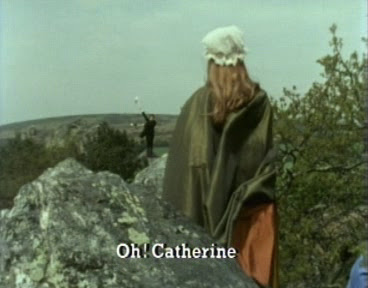 It seems lately I've been revisiting a lot of things I haven't read or watched in ten years. Well, I've watched episodes of Monty Python's Flying Circus here and there, but lately I've been alternating between watching it and Star Trek nightly. It's amazing how unique and brilliant Flying Circus remains. Much of the time I'd describe the show as imaginative chains of absurdity used to isolate the ridiculousness of human thought patterns. This description applies to a variety of different kinds of sketches on the show, from the superficially both logical and senseless sketches like the "Seduced Milkman" sketch where a clichéd situation of a woman luring a milkman into the house only to trap him upstairs with a dozen others like him, to the more direct commentary on the absurdity of humanity being translated through language, like "The Semaphore Version of Wuthering Heights".

And such an incredible group of performers, too. Last night I watched "Live from the Grill-O-Mat Snackbar", a second season episode which is linked together by John Cleese playing another in a succession of BBC announcers, this one exhibiting the wonderfully subtle anxiety of someone who is uncomfortably, vaguely aware of the fact that he's a twit and whose job is to speak to a large audience. There are a million guys like this in the media, especially local media, to-day.

This is the first time I've been able to watch the series properly, from the first episode to each successive episode. Distribution of old television shows has changed nicely from the 90s--my old VHS copies were of course collections of various episodes throughout the series in essentially arbitrary order. That was the best one could usually find for television series, for sale or rent. Watching it like this has allowed me to see how the threading of the episodes evolved, from essentially random sketches in the early episodes or long stories, to sketches that tended to be framed and linked by fake host segments or a recurring sketch.

I've also been reading Jack Kerouac's On the Road for the first time in a very long time. I'm reading the relatively recently released "original scroll" version from before Kerouac edited it to change the names of real people and to do the regular work of editing--removing and rearranging scenes, altering some of the language, and so on. I'm surprised how much of it is different, for a guy who all but seemed to equate editing to censorship. There's a whole scene where he goes to an opera (Beethoven's Fidelio) in Denver that I don't remember from the book. Generally the editing seems to have been to give more focus to Neal Cassady, which so far I have to say was wise.

Last night I came across the trailer to the upcoming film adaptation;

I can't really tell if I like the two guys playing Kerouac and Cassady. They certainly seem a great deal more modern than the men they're portraying--maybe it's my imagination, but young men don't seem quite as masculine to-day as they did in the 50s. The guy playing Kerouac certainly doesn't look old enough to have served in World War II. I do love Viggo Mortensen as William S. Burroughs, though, despite the fact that the virile, handsome Mortensen is pretty fundamentally different from the gangly, geeky Burroughs. After seeing Mortensen play Sigmund Freud I'm willing to try him with anything. Maybe Winston Churchill next.
Posted by Setsuled at 5:16 PM
Email ThisBlogThis!Share to TwitterShare to FacebookShare to Pinterest