I Think It's Green 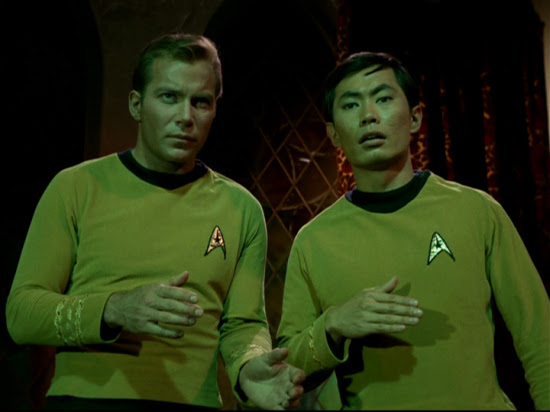 Finally some Sulu action. He's been relatively prominent in the past couple episodes I've watched, though not as prominent as I'd like. I wish they'd done that spinoff series with Sulu commanding the Excelsior, but I guess that's unlikely now that we're in rebootsville. If Paramount was smart they'd take advantage of George Takei's recent popularity, but it seems like Star Trek is handled smartly only around thirty percent of the time.

I watched "The Squire of Gothos" last night, the episode that introduced the Q prototype, the child omnipotent being Trelane. It is a pretty satisfying toss of mud at war hawks as Kirk notes Trelane could accurately be described both as a god of war and as a little boy.

"The Squire of Gothos" aired on January 12, 1967, a couple days before the Doctor Who serial The Underwater Menace aired its first episode. The surviving episodes of The Underwater Menace are among the weaker episodes of the series, and I have to call Star Trek the winner that week. Patrick Troughton still finding his footing as the second Doctor is actually fairly comparable to the still relatively newborn characters on Star Trek, "Squire of Gothos" being just the 18th episode produced. Though the Kirk/Spock/McCoy triumvirate was starting to get more of its charm, and McCoy in particular seemed to be settling into a deeper existence, as one subtle moment in the episode showed as McCoy was the only one who casually began digging in to Trelane's phantom food and brandy.

I was surprised by how much "The Squire of Gothos" feels like a Next Generation or Deep Space Nine episode. I read a book about Deep Space Nine production when I was a young high school trekkie and I remember reading how someone had their script edited to include a requisite bit of banter at the beginning of the episode. "The Squire of Gothos" starts similarly--they seemed to be hardcore believers in formula at Star Trek, but sometimes it did work.

Well, I better get ready for Japanese class. I memorised all the vocabulary words and everything in the study guide, re-read the chapter, and reviewed the previous chapter, so I confidently expect another C, which means I'll probably get a D. Here goes.