Lately I've been getting lunch often at a relatively new Mexican place called K39 Taco Shop. They have bizarrely cheap burritos--I like to get bean and rice burritos and almost every other place in town has them for around two dollars. K39 has them for a dollar twenty five and they're not cooked with lard. To-day, the pretty young cashier greeted me with a friendly, "Long time no see!" since it'd been a week since I'd seen her. Everyone working there seems like they genuinely, eagerly want to be friends which, to a misanthrope like me, is a little off putting. Then, to-day, by the register, I saw a stack of these; 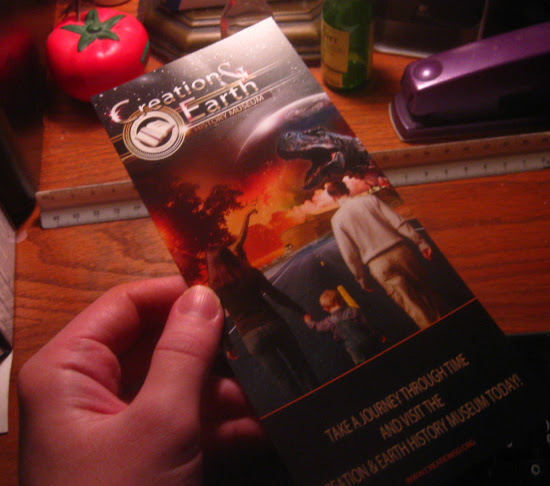 Dino sure looks excited about that ark back there. If you ask me, it looks about as seaworthy as an ice rink. I asked the cashier if the shop was affiliated with the nearby museum in any way and she said, "Well, I think because they're Christian," as though it ought to have been obvious to me that the place was a Christian taco shop. I'm starting to wonder if K39 is a biblical reference. Is there a book in the bible that begins with K? Is there a Book of Krabappel? Oh, I see, there's Kings, two King books. Let's see, 1 Kings 39 (according to this website) is;

39 As for the other events of Ahab’s reign, including all he did, the palace he built and adorned with ivory, and the cities he fortified, are they not written in the book of the annals of the kings of Israel?

Hmm. And what of Ahab's tacos? Are they so recorded in the annals of Israel, is record preserved of his ground beef he adorned with the decadence of cilantro, salsa, and sour cream? For such may it be said of his avarice, it is known Ahab sought in his arrogance to build on the tortillas of corn a kingdom like unto the Lord's mightily conceived spiciness and savoury sauce.

I like to get bean and rice burritos because it's a good source of protein for a vegetarian. From now on I think I'll say I'm swallowing Christ's hot protein.

I remember hearing about the Creation Museum in Santee in my communications class last year. Now I'm seriously thinking about checking it out. This is their web site.
Posted by Setsuled at 6:28 PM
Email ThisBlogThis!Share to TwitterShare to FacebookShare to Pinterest