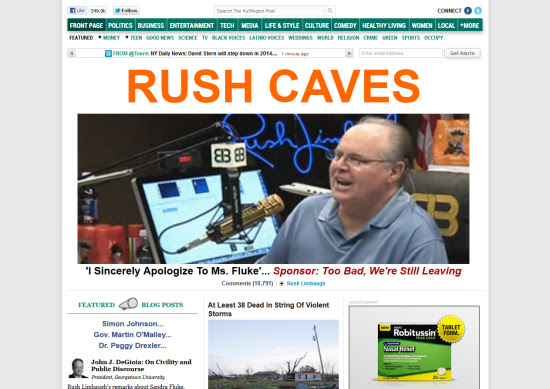 Oh, American political discourse, will you ever stop finding new heights of civility and grace? This is Huffington Post's tactful headline for their story about Rush Limbaugh issuing an apology to Sandra Fluke for heaping verbal abuse on her for weeks, calling her a slut and a prostitute because she suggested health insurance plans ought to cover contraceptives. Here we have a guy who deliberately agitated people, issuing an obviously phoney apology because of his sponsors jumping ship, and The Huffington Post using some of its typically cheap, provocative rhetoric to report it. "Rush Caves"? The point of that isn't justice prevails, it's about a shot to Limbaugh's pride, helping to insure the puerile give and take will continue.

I'd like there to be a slightly more complicated conversation about the culture clash fundamentally at play here as well as the hypocrisy. Limbaugh, who was infamously caught returning from the Dominican Republic with a bag full of Viagra, was attacking Fluke from the point of view of two conservative perspectives--that people should have to cover the cost of their own healthcare (and then some) and that people shouldn't have recreational sex.

It's no wonder President Obama personally called Fluke. Democrats have been wanting to set up Limbaugh as the face of the right wing for a long time, and I say it's a good idea. Boehner may publicly decry Limbaugh's remarks, but this isn't the first time Limbaugh's been this ugly and prominent Republicans are frequent guests on Limbaugh's show. Limbaugh represents the sentiments at the heart of Republican political and government philosophy and he gives us a clearer view of them than the politicians' usually more mild presentations.

Mostly I'm just still amazed that Americans can still be so uptight about sex. Remember what I said about the pot fuelled sodomy scene on Family Guy a few days ago? Well, Rush Limbaugh has guest starred on Family Guy twice.